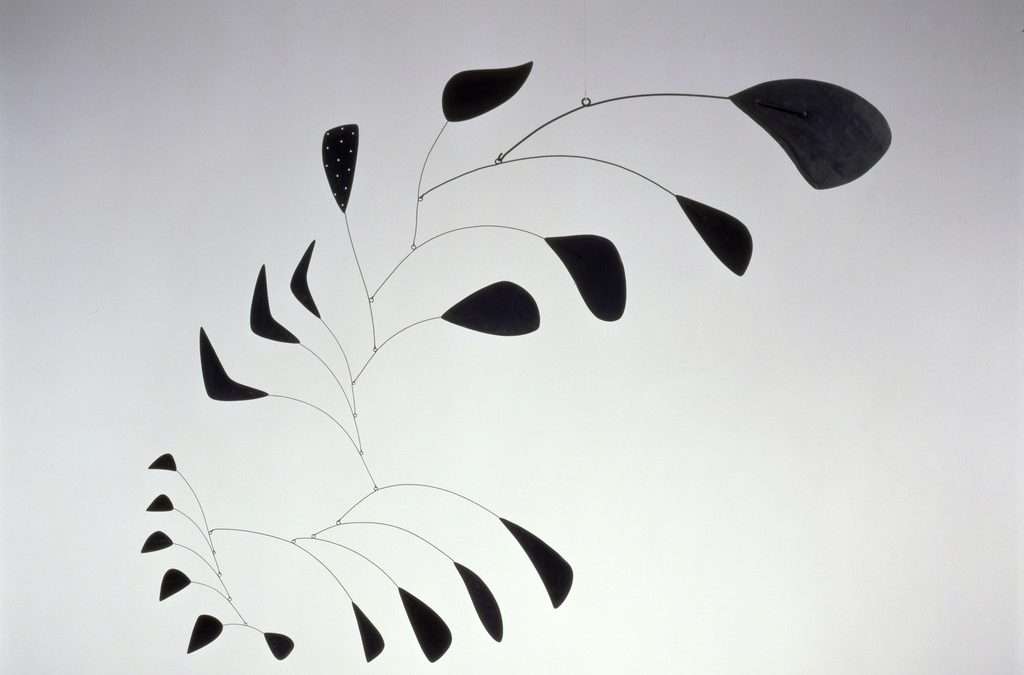 Here is a show that surely has something for everyone. Calder’s creation of aerial, delicately twirling, balletic structures would change sculpture fundamentally. At a time when mass and solidity were still the main modus operandi for sculpture, then made largely through carving or moulding, Calder brought unpredictable movement and space and created some of the most innovative and majestic pieces of abstract modernism.

The exhibition leads one through the development of his thinking. Early pieces burst with fun; there are wire portraits, figures from the world of burlesque, the circus, which was not yet a purely child’s entertainment, but a more adult one. Calder made his famous circus from 1926 – 31, and his 1928 Singe, Elephant of 1927, Galloping Horse from 1926 and his many acrobats show his sense of fun as they wobble and balance displaying their skills on their fragile wires. He conjures his Leopard, c. 1927, from a single wire, looped for the spots, entirely capturing its feline nature. A video display of Jean Painleve’s 1955 film reveals Calder as showman, performing his circus, the ring master par excellence.

He explored the line in space through pieces with movement, wit and satire. The boasting, overblown muscles of his Hercules in Hercules and Lion make even the king of the jungle wilt. His Medusa has modern electrically charged tresses. His Josephine Baker gyrates conveying his statement “wire lends itself very well to barbaric ornamentation”. They capture the frantic pace of the modern as it was in the 20s.

Their shadows cast on the walls seem to spread their “space” further, wider. The catalogue discusses the careful directional lighting of previous displays, indicating they were not always shown against white walls as here.

Calder also used bricollage; cork, rubber and found objects; the cloth’s peg head of his Dog, his Aerialist with a dress from a tiny scrap of cloth recall Miró’s use of cork and other detritus. Calder was aware of Miró’s works but for him they were abstractions, and he, Calder, was not ready to leave the figurative and the anecdotal behind. When he did it would lift him from being an artist of his time to one whose work has much more universal connotations.

It was a visit to see Mondrian in his studio in 1930 that tipped the balance. Mondrian had created a total environment in his studio, with carefully arranged colours and geometric forms. Seeing this brought the breakthrough for Calder. He suggested that Mondrian’s arranged colours and shapes should “oscillate”, but while Mondrian was unimpressed it unlocked the key to Calder’s future explorations. He experimented with movement powered by motors and spaces framed with wire. Ultimately this was too limiting, too predictable. There followed experiments with freeing two-dimensional form of its flatness; panel paintings with biomorphic forms suspended in front of them, recalling Arp’s work. Arp’s experiments, dropping papers from a height and gluing them down where they fell led Calder to try for more changeable, mutable compositions that the audience could be invited to collaborate with and intervene. Sadly, today, the pieces’ fragility no longer permits the gallery goer to do this.

Some works in the present show have not been seen in public since 1937 when they were shown at Pierre Matisse’s gallery. That was a year in which, unusually as he was not Spanish, Calder was invited to contribute to the 1937 Spanish Republican Pavilion at the Paris Exposition Universal with his Mercury Fountain displayed in front of Picasso’s Guernica. Calder’s solution took into account not only the mechanics and flow of the mercury but was seen to embody both the modern and the political.

Then come Calder’s majestic mobiles, given that name by Duchamp to contrast with Calder’s Stabiles, his pieces that do not move. His grandson, Alexander C. Rower, president of the Calder foundation, described his grandfather’s approach to the making of his mobiles. He did not begin calculating weights and balances in space but worked intuitively, in the moment. Calder would arrange related shapes and off-cuts, organising colours and reflections on a table. Only when happy with an arrangement would he begin to “stitch” them together with wire suspending them in the cavernous space of his studio.

Performance and sound are still present. Triple Gong, c. 1948 is just that, three gongs that sound at random with the air currents. Earle Brown’s Calder piece is a performance work actually played on Calder’s Chef  d’orchestre.

Calder himself called his pieces “objects”, not sculpture. While works like Snow Flurry and Blériot still show his sharp eye and wit. Their complexity and simplicity is deceptive. The unpredictability of their free movement is playful but not in a merely childlike sense. They resonate with the political and aesthetic engagement of modernist architecture and hang well in its open spaces.

The final room contains an architectural cascade of black perforated forms, Calder’s 3.5 metre high piece, Black Widow, 1948, from the Instituto de Arquitetos do Brasil, shown outside its home in São Paulo for the very first time.

Here is an exhibition that cannot fail to enchant.