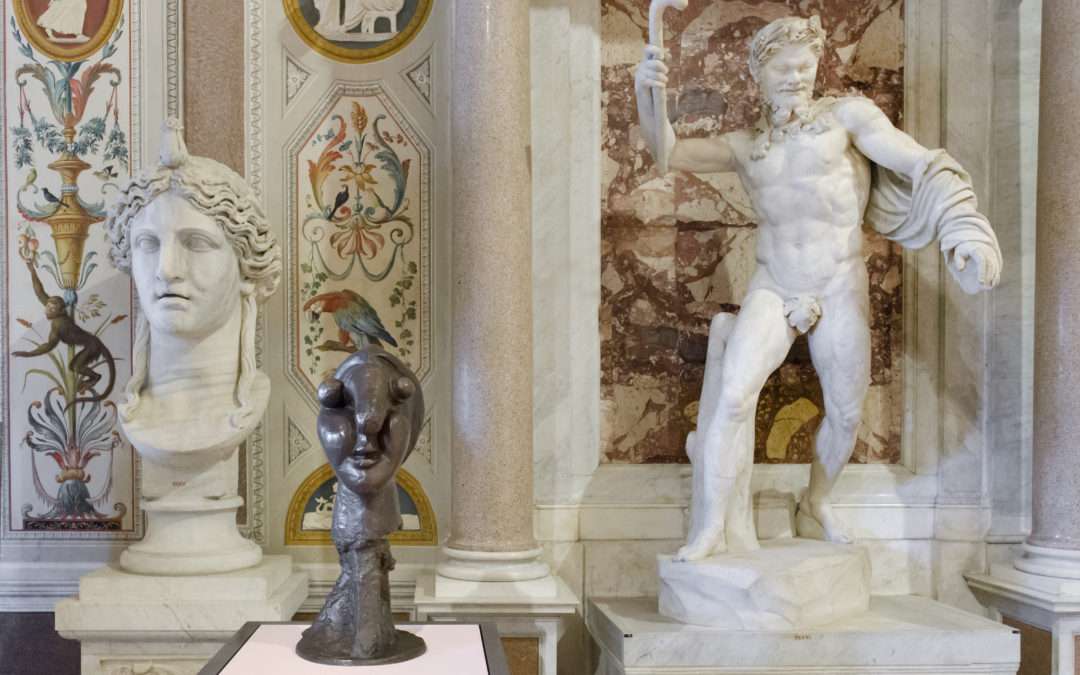 Guidebooks refer to Rome’s Galleria Borghese as the ‘queen of all private collections’. Set in the expansive Borghese gardens, it is a collection begun in the early 17th century by Cardinal Scipione Borghese and added to by future family members. Prince Marcantonio Borghese was responsible for the lavish, neoclassical decoration in the late 18th century.

In this interior are displayed the Borghese’s stunning collection of classical sculptures and paintings, both ancient and Renaissance. The paintings include Caravaggios, Peruginos, Corregios, Rubens and Titians, and the sculptures are even more visually arresting. They span from the antique Roman ‘Colossal Portrait Head of Hadrian’, from 140 AD, and the 2nd century Fighting Satyr to Antonio Canova’s elegantly erotic marble of Pauline Bonaparte Borghese, Napoleon’s sister, created in 1808. Poised Venus Victorious, she reclines topless in cold hard marble that is transformed into soft flesh and lush cushioning. But it is the work of Gian Lorenzo Bernini that steals the show: the Rape of Proserpina, Apollo and Daphne, and his David. Baroque, realist, over life-sized, they are extraordinarily dynamic and fluid, their white marble catching the light. Bernini portrays his subjects at cliffhanger moments of drama.

In this environment, from October 2018 to February 2019, 56 of Picasso’s sculptures were displayed. They dated from 1905 to 1964, and there were photographs and videos to give context. It is Italy’s first exhibition dedicated exclusively to Picasso’s sculpture. It is well to remember that the Borghese collection was once a very modern one. The main focus of the Cardinal’s collecting was his contemporaries, and Bernini was just that. So to displaying modern sculpture plays to the collection’s history.

Many visitors to the Borghese may be unaware of the strict classical training the young Picasso underwent. First by his father, a teacher of academic drawing; next he studied at art academies at Corunna in northern Spain and the Llotja in Barcelona when his family moved there, before gaining a place in Spain’s top art academy, the Real Academia de Belles Artes de San Fernando in Madrid. This training had classical art in its veins; one drew classical art first in print form, then from plaster copies, before graduating to live models, until one could do it almost in one’s sleep. The lessons Picasso learnt from this training never left him, be it he spent most of his life working in opposition to them. It is an understanding of the tenets of that classical training that is very much at the core of his work. He used many of its subjects, stances and references.

Filippo Baldinucci, in his life of the sculptor, wrote of Bernini’s transformative powers with marble. Transformation was at the heart of Picasso’s work. He chose mundane objects, and unlike Marcel Duchamp transformed them into creatures of art. The bronze of his She-Goat of 1950, made originally from a broken basket, ceramic pots, a palm leaf, and bits of metal, wood, cardboard and plaster, is shown in the same room as Bernini’s The Goat Amalthea with the Infant Jupiter and a Faun of 1615. he transformed this pile of rubbish into a living creature standing squarely on its hooves that might butt you out of the way should you turn your back. It is every bit as transformative as what Bernini did with marble.

Picasso broke with the tradition of carved and modelled sculpture, with ideas of mass, weight and density. He began to make works with materials considered unworthy of high art. The exhibition placed his sculptures where they would draw the greatest resonance from the works around them and there are some stunning juxtapositions: his 1941 Tête de femme (Dora Maar), originally modelled from clay, one could see from a distance through a series of doorways displayed against a plain background, placed between two pillars like a triumphal arch or altar. There are several heads of Marie-Thérése Waltermade in 1931 that are shown close to classical busts, some in bronze but others in plaster echoing the marble of the older busts. The dancing, contorted and distorted form of his 1931 Baigneuse references ‘contrapposto‘, the off-axis stance with weight on one leg, twisting a figure from shoulder to hip that is seen in much classical and Renaissance sculpture, Michelangelo’s David being a famous example.

But despite the text boards explaining the ideas behind the works, visitors to the gallery I spoke to were bemused. It is a scholar’s exhibition – you have to know to get the best out of it.

My own first impressions were of how small the Picassos are. The largest piece was probably his Femme à l’orange at 1.8m, whereas Bernini’s Rape of Proserpina is 2.25m, his Apollo and Daphne is 2.43m; both are on plinths that add over another metre to their height. They overshadow anything else, for even for Picasso you cannot wheel a Bernini out of the way, nor the other sculptures in the Borghese’s permanent collection. So the Picassos had to be fitted in where they could. This prevented many pieces being seen in the round.

We are also so used to viewing modern art in modernist white, uncluttered interiors that the highly decorative interior of the Borghese is a timely reminder that many of Picasso’s pieces predate the white cube, and while they may look out of context in Prince Marcantonio 18th-century interior, the philosophy behind that décor is what they were created to oppose.  Jarring note adds force.

So, small in stature, there is still an aspect to Picasso’s sculptures that Bernini’s do not have. It is humour. Despite the size and drama of his work Bernini is not funny. Picasso’s 1961 bent-metal sculpture of a woman holding a child above her head might seem in its gesture to parody the Borghese’s Bernini. The way Picasso has expressed mass and volume by using only very flat materials that have neither, sheet metal and paper for the maquette. It is these tricks, once understood, that bring a smile everyone can appreciate.