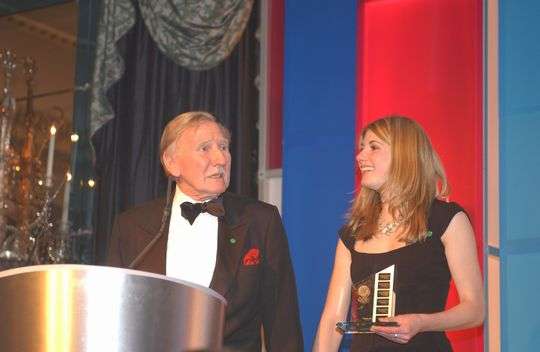 Leslie Phillips recipient of the Dilys Powell Award for Excellence in Film 2006 with Jodie Whittaker, his co-star in Venus.

A collection of pictures from our past film awards.

This is a random selection from pictures taken at  the Film Awards in recent years. There are three black and white pictures of the awards for 1980, 1981 and 1982 in the Circle Dinners gallery.

Helen Mirren accepting her Best British Actress Award for The Queen with David Gritten, chairman of the Film Section, and Sarah Crompton of The Daily Telelgraph. © Critics’ Circle.

A trio of Dame shots

Dame Judi Dench, recipient of the Dilys Powell Award for Excellence in Film 2008 with David Gritten of The Daily Telegraph at the Grosvenor House Hotel. © John Reiss

Emma Thompson arriving at the Dorchester to collect an award on behalf of Meryl Streep . © Scott Myers