Popular Pachyderms: Miss Clara and the Celebrity Beast in Art 1500-1860 at the Barber Institute. 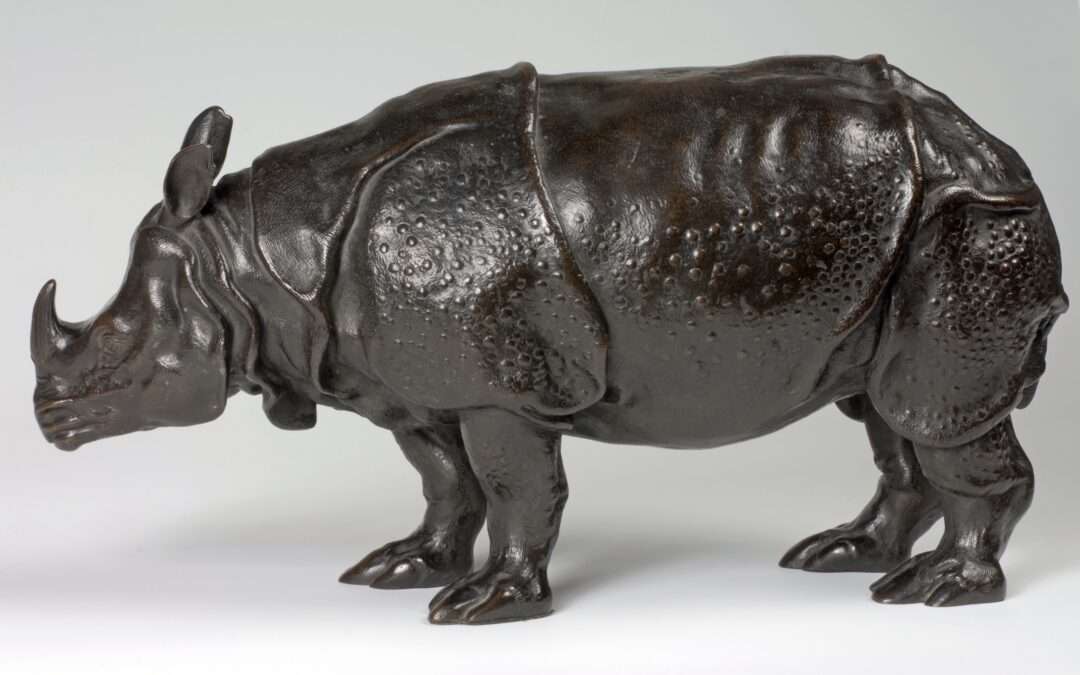 Maybe you have been fortunate enough to see a rhinoceros in the flesh, running at full tilt with a speed and agility that defies its bulk. They carry with them the aura of the African plains and the jungles of India and you know you have been privileged to see one. For us in the 21st century we have some idea what such a creature looks like. But for those in centuries past it must have been a wonder indeed.

The exhibition at the Barber Institute of Fine Art, Birmingham, centres on a bronze in their collection entitled A Rhinoceros, called Miss Clara, and traces Miss Clara’s story from her arrival in Holland in July 1741 at two and a half years old. She had been bought by the Dutch sea Captain Douwe Mout van der Meer in the Indian city of Hooghly-Chinsurah, north of Kolkata, and raised  from a few months after her birth in the household of a Director of the East India Company.

Douwe Mout exhibited her, initially in Amsterdam, before transporting her all across Europe, through France, Italy, Switzerland and the Holy Roman Empire for twenty years, finally coming to London, where she died in 1758. She was conveyed on these travels in a sturdy wooden wagon with large wheels seen in the background of a painting of 1751 from the Venetian School, drawn by eight horses. An equally sturdy wooden enclosure no doubt also travelled with her. She was feted wherever she went and the exhibition traces her life in art. Aside from prints that Douwe Mout produced to promote her she was drawn and painted by Jean-Baptiste Oudry and many others. Oudry’s painting is vast and not in the exhibition but the carefully observed drawing is. Certainly she became a celebrity.

The scholarly catalogue for the Barber exhibition begins by tracing the story of the rhino in art. It does not start with Miss Clara, nor was she the first to be seen in Europe. They were known to the Romans and Greeks: Pliny the Elder included an account of the one horned, cloven-hoofed rhino comparing it with other animals in his Naturalis Historia. Rhinos also became part of the spectacles of exotic beasts at the Colosseum in Rome. There then seems to be a gap (as far as we know) of rhinoceroses reaching Europe until in 1515 Sultan Muzafar II gifted a male, single-horn Indian rhino to the governor of Portuguese India, Alfonso d’Albuquerque. In the spirit of aristocratic gift-giving, Alfonso gave it to King Manuel I and it arrived in Lisbon on 20 May 1515. King Manuel I then gifted it to Pope Leo X in Rome. But the ship carrying the rhino sank en route and the poor beast with it. This is the creature that was the subject of Dϋrer’s famous woodcut also of 1515.

Dϋrer, who never got further south than Venice, did not actually see the Lisbon rhinoceros, but used a first-hand account to produce the pen and ink drawing now in the British Museum on which the woodcut was based. Both the drawing and the woodcut are accompanied by quotes from Pliny, but it is a depiction that is anatomically incorrect – showing the rhino’s wrinkled hide as armour plating. But that he drew the rhinoceros having never seen it is a measure not only of the curiosity the rhinoceros engendered, and how far that celebrity had spread in the same year the creature arrived in Lisbon, but of the celebrity Dϋrer, himself, sought.

To see a rhino was clearly an event, and they have been depicted a surprising number of times: aside from the images already mentioned, one was painted by George Stubbs. They could be seen under palm trees with Chinamen. They supported clocks.

And they were sculpted in marble and in bronze. It is the Barber’s own small bronze that is at the centre and was the starting point for this exhibition. Small – 24.5 x  46.7 x 16.5cm – it is beautifully detailed and known in only one other cast, now in the collection of the Victorian and Albert Museum. Both bronzes are in the exhibition as are two pieces in marble, one a similar size to the two bronzes (though less detailed than them) by François Portois, pupil of Peter Anton von Verschaffelt, the author of the other, larger, marble – over a metre in length. That piece, despite standing outside for many years at Waddesdon Manor, is more detailed than the marble by Portois. The current exhibition has allowed these four pieces to be studied together and concludes that the Barber’s small bronze derived from the larger Vershaffelt rather than the similar sized Portois piece.

The story of the rhinoceros in art would not be complete without, according to Pliny, its arch enemy the elephant. Painted by Poussin, sculpted by Bernini, it also was the subject (or perhaps one might say the victim) of aristocratic and diplomatic gift giving. Many elephants and rhinos died either in transit or shortly after – good animal husbandry not being fully understood at the time, not for pachyderms at least. Miss Clara’s diet was said to consist of hay, bread, orange peels, great quantities of water and occasionally beer.

Many of the exhibits capture a twinkly eye or the stance of the animals they depict. Yet the matter of poor animal husbandry, born no doubt of ignorance, is perhaps the aspect we feel least comfortable with today. The exhibition does not shy away from the downward social display of exotic animals. Once the province of royalty, menageries became more accessible to and popular with the public at large through time. Forerunners of today’s zoos, they mixed entertainment with education – although not always comfortably as such displays incorporate concepts of empire and colonialism. Though purchasers of the popular souvenirs no doubt were no doubt unconscious of such matters.

This small, focused and perfectly presented exhibition covers a wide span in terms of both time and subject. It does not shy away from the less palatable aspects of its subject but recounts history straightforwardly – lest we forget such histories.

The exhibition runs from 12 November 2021 to 27 February 2022 and is accompanied by a well-written scholarly catalogue, Miss Clara and the Celebrity Beast in Art 1500-1860, The Barber Institute of Fine Arts, Birmingham, in association with Paul Holberton Publishing, Birmingham and London, 2021.