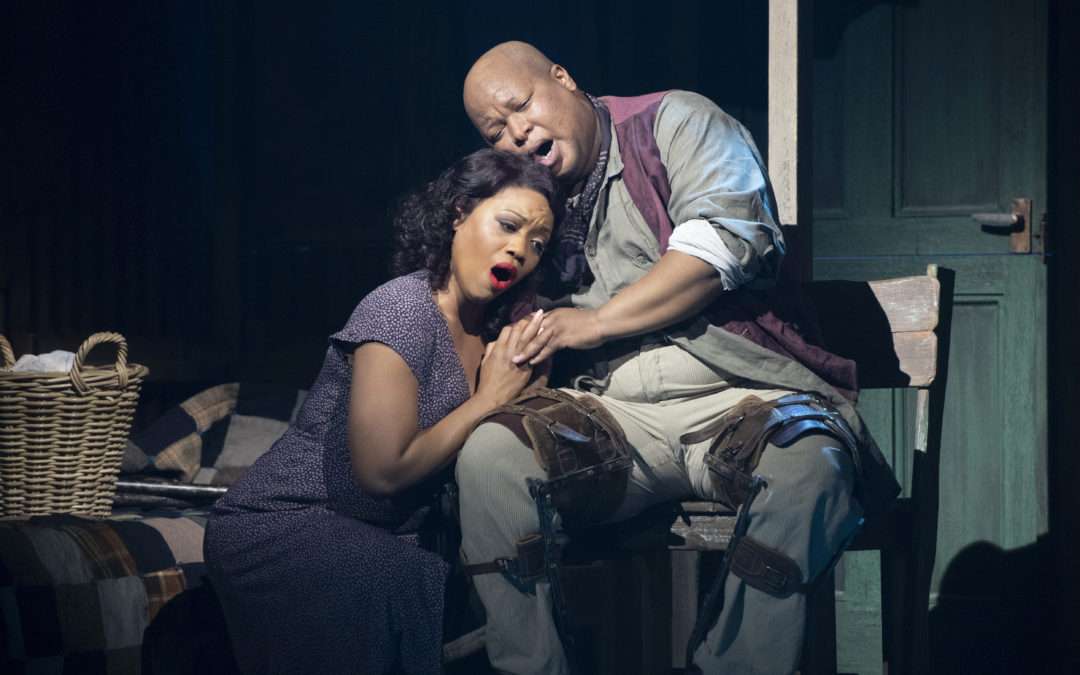 Grinding poverty and death at knife-point. A dinner interval. More poverty, drug dependency, a hurricane, another stabbing. Then a drive home through leafy Surrey. An evening spent at Porgy & Bess at Grange Park Opera does throw up some extreme contrasts. But the show is compelling, the production is highly effective, thought-provoking, well sung and played. And Gershwin did, after all, write a lot of searingly good tunes.

Maybe such paradoxes, the fact that Gershwin’s great work contains not just artifice but also artificiality, is intrinsic to it. The (white) composer’s visits to South Carolina to research an opera set in the (black) Gullah community were as a tourist. He played golf at Charleston Country Club. He rented a cottage on Folly Beach, hired a piano, and set about imagining how he might bring his own highly personal and American “Wozzeck” into existence…

But how is a well-heeled audience which has just enjoyed its dinner going to respond to a powerfully tragic moment like the end of Act 3, Scene 2? It is the last time the audience will see Bess (the excellent American soprano Laquita Mitchell). This is the scene in which her resistance both to the drugs being blandished by Sportin’ Life (swaggering South African tenor Rheinaldt Tshepo Moagi) and to the bad-boy charm of the man himself have been utterly broken down. The music at the moment when Sportin’ Life is enjoying his triumph blazes goadingly in a full-on orchestral reprise of the song ‘There’s A Boat Dat’s Leavin’ Soon for New York’. The “magic dust” Sportin’ Life has supplied her with has completely taken hold of Bess, and she does a crazed dance. She is clearly a victim. Stephen Barlow and the BBC Concert Orchestra bring out all the swagger, the violence and cruelty in this score. And then it ends. A short-lived, sheepish ripple of applause breaks the stunned silence. But one senses that the power of the music has fully involved the audience in this glorious and truly operatic moment.

The leading members of the cast are sturdy performers. The Porgy, South African Musa Ngqungwana, is vocally very strong. He delivered his repeated desperate question ‘Where’s Bess?’ in the final scene with real pathos. And if he does not yet – he is 35 this year – have the dominance in the role of, say, a Willard White, he is well on the way to establishing it. Serena (Sarah-Jane Lewis) and Clara (Francesca Chiejina) both made the most of their solo moments. And as the villainous Crown, bass-baritone Donovan Singletary was totally convincing. And the chorus really delivered in the hurricane scene.

Director Jean-Pierre van der Spuy portrays well the closeness, the claustrophobia of the Gullah community. He had an early background in political theatre in his native South Africa, and he has ensured that clashes between the characters always have an edginess about them. And the scenes when the white characters come in and threaten the inhabitants of Catfish Row have an uncomfortably authentic resonance of apartheid South Africa. Choreographer Lizzie Gee has created some superb movement, and the designs by Francis O’Connor with lighting by David Plater are beautiful and evocative, with a backdrop of some stunning sky colours. The production uses intermittent subtitles. They definitely help.