Out There: Our Post-War Public Art, Somerset House, London 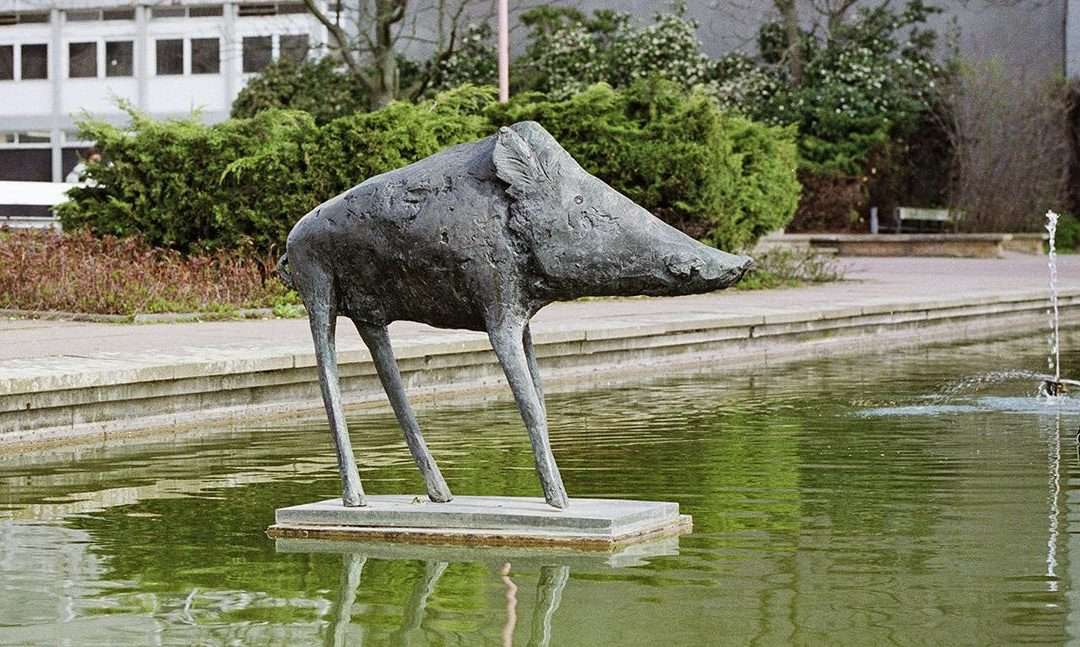 What lay behind the explosion of interest in creating public art following the Second World War?  What prompted the London County Council in the late 1940s, the organisers of the 1951 Festival of Britain, the builders of New Towns and the architects of schools and hospitals to commission sculptures, murals and other public artworks, enlisting artists to lift the national spirit and enhance the landscape, an intrinsic part of reconstruction and regeneration necessitated by six years of wartime devastation?

The answers are to be found in Out There: Our Post-War Public Art, Historic England’s first major exhibition now viewable at London’s Somerset House.  It comes at a time of growing concern about the fate of many important sculptures, friezes and murals and coincides with a new listing of several dozen celebrated pieces.

At Somerset House, curator Sarah Gaventa has assembled a fascinating group of sculptures, reliefs and maquettes, making exemplary use of a confined display area.  The story is enhanced by photographs, drawings, magazines, posters and film, some on show for the first time.  The show admirably captures the 1940s’ aspiration for the brave new world that spawned the National Health Service and an ambitious programme of social housing, schools and hospitals.

A 1972 quotation by the sculptor Bryan Kneale, displayed on one wall, points up one artist’s strong feelings about what had been achieved and remained to be done to bring the artist closer to the public.  For Kneale, unless sculptors were given the opportunity “to exhibit and work in a public arena, the whole concept of art becomes relegated to a purely minority occupation – accessible to fewer and fewer people.”

The London County Council (LCC) took a major step in showing sculpture outside a gallery when in the summer of 1948 it sponsored an open-air display in Battersea Park, for which 170,000 visitors paid to attend.  When the Festival of Britain was organized for 1951, its architectural director Hugh Casson was keen that sculpture should be integrated into the urban landscape.  Eight million visitors were able to view more than 30 sculptures and 50 murals by established and rising talents, such as Lynn Chadwick, Barbarba Hepworth and Henry Moore.  The LCC continued to sponsor shows through to sculptures1966, the Arts Council meanwhile running its own Outdoor Sculpture exhibitions with provincial tours.

Out There highlights the role of Harlow, one of the first New Towns, as a supporter of public sculpture, noting that, “Few other towns can boast a collection of such national significance.”  Today its collection numbers 65, not including six that were stolen.  Two months ago December Historic England, warning that public works by important artists had been destroyed, sold, lost or stolen, launched a campaign to find them.  It is encouraging that 41 sculptures across England have just been newly listed in a bid to protect them.

The Ministry of Education’s first bulletin in 1949 contained a section on sculpture and mural decoration.  It encouraged local authorities to allocate part of the funding for new schools to sculptors and mural decorators.  Out There notes how Leicestershire and Hertfordshire promoted a broad range of public art.  Although some architects shied away from incorporating sculpture into their buildings, a small minority accepted the challenge, Geoffrey Clarke, at Coventry Cathedral, and Barbara Hepworth, for the John Lewis Partnership, being two beneficiaries.

Promotion of public sculpture has had its setbacks.  Out There cites the ill-fated 1972 Peter Stuyvesant City Sculpture Project, which “sought to create an  awareness of sculpture as a part of everyday life.”  However, there was by then an “overwhelmingly negative attitude of both local authorities and the public to contemporary ‘modern’ art.” Thus, only one of 16 commissioned pieces stayed permanently on site, some being deliberately destroyed, such as Barry Flanagan’s Cambridge sculpture, Vertical Judicial Forms.

Public art has, of course, continued to be commissioned, made and sited – some admired, some justifiably vilified.  For the architectural historian Lynn Pearson, quoted in the admirable booklet accompanying the Somerset House show, “The job of public art is to inspire, to annoy, to irritate, to be tactile, to be touched, to be climbed on or even to be used as football goal posts, it’s just to be enjoyed.”

There is undeniably much to be enjoyed in Out There’s several rooms.  The big names are there, of course, but it is also nice to see acknowledged the work of such relative unknowns as Trevor Tennant and Dorothy Annan: Tennant’s rescued 1963 concrete and plaster relief New Horizons and Annan’s wonderfully period ceramic for Fleet House, Farringdon Road, saved for the Barbican.