Rhondda Rips It Up! Welsh National Opera on tour 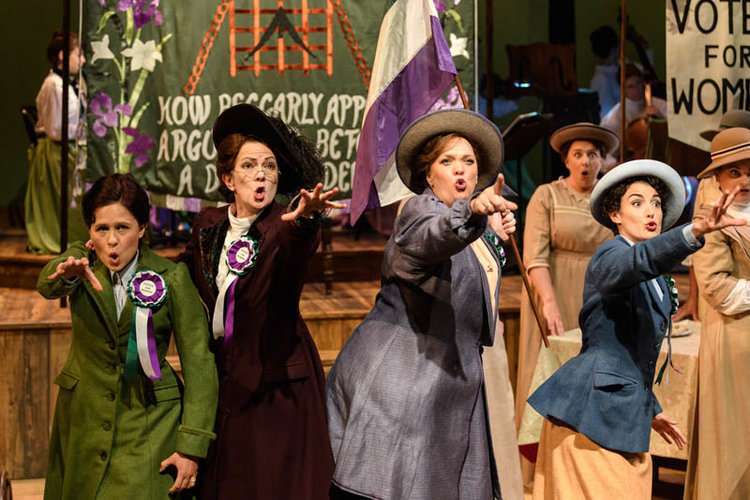 As its contribution to the centenary of a historic widening of the franchise, WNO has commissioned a work on the subject of a south Wales suffragette. The score, from Elena Langer (whose Figaro Gets a Divorce WNO toured in 2016) sets the tale in largely jolly mode. Reviewers used to call Stravinsky’s neoclassical discords “classical music with wrong notes”. Langer’s show is rather G&S with wrong notes, as though Weill had been given the job of creating a performing edition of Patience out of Sullivan’s sketches. The libretto (Emma Jenkins) is packed with sexual double-entendres and jokes about food, so no danger of charges being brought of humourless PC lecturing and hectoring.

As far as it goes, this is not an unreasonable approach. However, the evening has to accommodate news of Emily Wilding Davison’s 1913 death at the Derby, the beginnings of a terrorist campaign, the prison authorities being accused of torturing political prisoners, the outbreak of the Great War and the on-stage sinking of the Lusitania. Here the music and libretto need to put their hockey sticks away and face our divisive violence and our shared mortality.

A further challenge is the power of Smyth’s March of the Women, which is sung in the first half. Just as the singing of the Marseillaise is the most memorable scene in a well-known film set in a nightclub in wartime Morocco’s largest port, so Smyth threatens to destabilise WNO’s cabaret-opera. The cast gave it an appropriately rousing performance, having understood it really is a march. The only downside of this is that the evening’s anthemic moment happens before we reach the interval and the concluding opportunity for the audience to join in couldn’t compete.

The format of the evening is similar to Oh! What a Lovely War, even down to having a Master of Ceremonies (Lesley Garrett in a trouser role). Indeed, Garrett even sings Goodbye-ee, which Littlewood also used. Garrett’s voice is certainly older than in her ENO Vixen days, but the charisma and stage presence are unaffected. If television isn’t begging her to be a judge on one of the high-profile talent competitions, they’re missing a trick.

The look of the production (Lara Booth) was rather good in a downbeat sort of way. The backdrop of coal pits reminded us not at all of the viscountess’s world in London and Newport, but of her father’s wealth. The on-stage orchestra is about the size of the one in Kander’s Cabaret and occasionally drifts anachronistically in that direction; these women were not listening to jazz but Danny Boy and Chu Chin Chow. The ten instrumentalists are costumed to be part of the performance and there is some chat between conductor (Nicola Rose) and the women from WNO’s orchestra. The costumes (Sian Price) are nice, largely pastel but with occasional outbreaks of red and purple, with lots of hats.