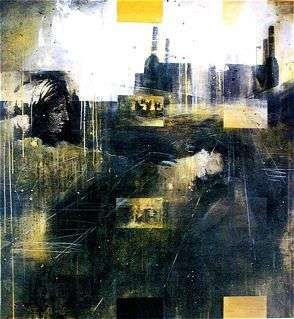 From the fall of Manhattan’s Twin Towers to the rise of London’s Shard, the first decade of the 21st century has been a rollercoaster ride for Richard Walker.

Major events of the period such as 9/11, the Iraq and Afganistan wars and, close to home, 7/7, have exercised a major influence on his work. His current show at one of Fitzrovia’s oldest galleries brings together the key larger paintings from this period alongside more recent pieces. As with de Chirico’s dreamscapes, Moore’s tube station drawings and Piper’s architectural ruins, Walker expresses his ideas through the prism of the urban landscape: layering, collaging and mapping out monumental spaces.

The city – whether New York or London – is simultaneously a physical location and a mental place. It’s a platform for the launch of ideas which he expresses through a range of disparate and sophisticated techniques, ranging from drawing, painting and printmaking to photography and digital music. All this gives rise to the keenest sense of contemporaneity – the particular moment that makes up the lived sense of now. And with this selection there is a sense of time shift, of history passing, of being on the cusp of another era.

Goodbye Old World marks the start of a new decade. Expanses of turquoise/jade draw back like heavy curtains. Their intense blue frames a torn edge of white which outlines the ziggurat of the Shard rising up over London Bridge station. We see it silhouetted as it soars over its scaffolding, changing from orange to green.

Is this gigantic tower a futuristic monster soon to be part of a Bladerunner-style distopia? Or is it the symbol of a new era, a brave new world? A hovering lime oval suggests organic life, but the Union Jacks on shadowy squares give pause for thought. They are images taken from the coffins of returning Afghan war casualties. Young men’s faces float up, ghost-like, in a blown-up sequence as though in CCTV footage frozen to identify the features of a particular person. On the one side – the macho architectural daring and arrogance – on the other the grim result of post-imperial military adventures.

The bizarre juxtaposition of the Shard with the doomed soldiers raises the questions – is there a connection and what is it? In art as in life terror and death sometimes lie side by side with moments of beauty and even peace. Drawing on his skill at evoking architectural space and the excitement and fears it can fuel, Goodbye Old World reprises themes that have preoccupied the artist throughout his career. He makes London’s architectural landmarks into vehicles for pivotal moments in history.

New York’s skyscraper canyons had long been close to Walker’s artistic heart. But in 2001, the plunging darkness and flashing whites expressed the shock of 9/11 in a painting called Elegy. In Days of Echo, made three years later, an outline of the giant Battersea Power Station watches over snapshots of cars set alight and running youths from the Brixton riots set into a De Chirico-esque psychological space. The station, like an upturned dying mammal, is still richly symbolic of the unresolved issues of post-industrial society. There is a fierce darkness in the monumental scene, in which a classical Blakean figure presides over the receding wasteland.

The complex associations of the built environment are most recently explored in paintings based on the Shard, including the ironically titled Get the London Look (referencing a popular advert), make up only one vein of Walker’s work over the last decade. Another side is inspired by Samuel Palmer’s views of the English countryside. Superimposing photographs to create many layered and textured views, he captures that sense of shared but secret places in paintings like Love Field.

The brutal but magnificent Suddenly Last Summer reopens the scars of 7 July 2005 in Tavistock Square. Outside Walker’s Bloomsbury studio the last of four terrorist bombs exploded on a No.30 doubledecker bus, shattering the peace of a summer’s day – and what until then had been an oasis of tranquillity. It is a memory of the scene, made a year after the event, now back to normality, but with the horror implied through dripping masses of paint. On the pavement are the mottled shadows cast by the square’s grand London plane trees – trusted old friends. But their comforting presence is blotted from sight by the dark areas of green and purple.

Recent urban works use reworked photo-images of New York’s Fulton Street. In Approx. Fulton St No.2, tall buildings provide a sense of height and scale as they dance to the music of colour. There is a crazy humour and irrationality in the lolling French curve, acid greens, turquoises and swirling blacks as they are orchestrated and move to the same beat. Indeed, the purple curve, sporting it’s personal brushstrokes and spatters, suggests the flow of a G clef. In this free-floating world “Heaven can become the distance between a French curve and a piece of charcoal”, Walker says. Indeed.

Early 2011 saw the making of twelve small “landscapes of the mind”, based on the song titles of David Byrne and Brian Eno’s pioneering album My Life in the Bush of Ghosts – a name that the musicians took from Amos Tutuola’s novel. The musical reference is revealing because visual sampling could be said to be the basis of Walker’s style. Borrowing song titles, which themselves are borrowed from a book becomes an endless self-generating process, full of allusions and meanings. And yet, making compositions out of previously abstracted or created ‘parts’ also relates to the synthetic phase of Cubism. In this respect Walker picks up the baton from Modernism as well as the more Romantic wing of English art of the last century. He shares Ben Nicholson’s love of aging weathered, pocked and pied things, setting palimpsests against geometric abstract shapes – circles, rectangles and ovals. Moonlight in Glory and A Secret Life, for example, could be described as five-finger exercises using charcoal scrawled around, scratched out, smudged or dragged over paint with frottage-like gestural effects.

The contradictory, quicksilver essence of contemporary life is evoked through the sum of many abstractions – of sound, sight, of language and memory. It is given to us in a way that is at times elegiac, imaginative and delightful. It’s the luxury of the utterly serious flậneur, having that moment to reflect and permit the world to come in to say…hello.

This essay was first published in the exhibition catalogue September 2011.