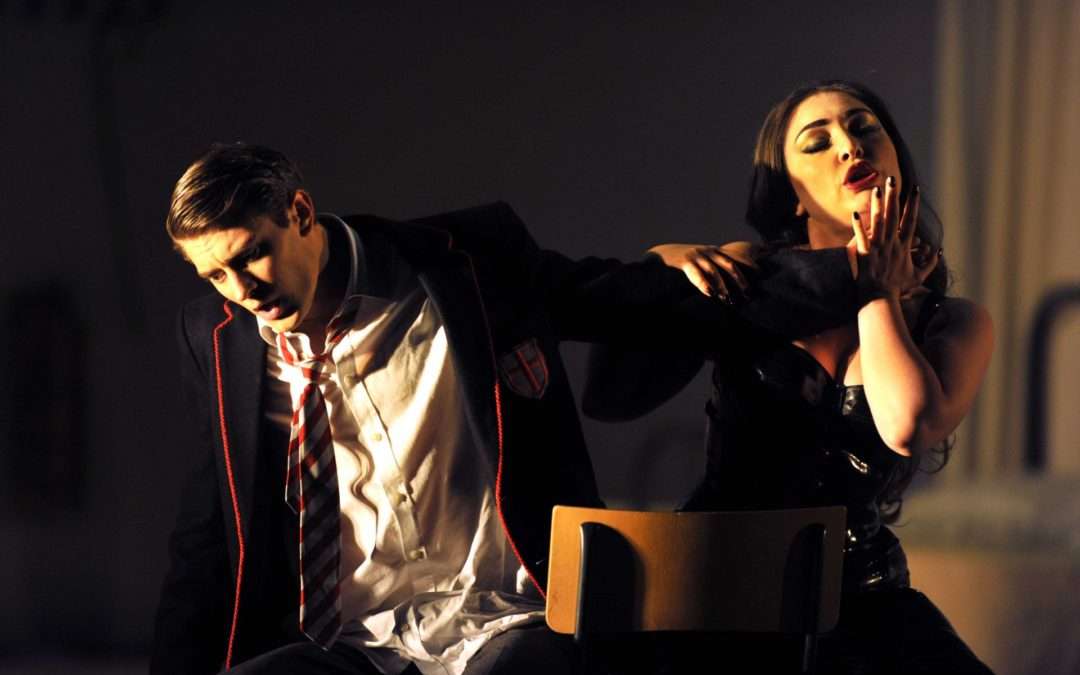 Jakub Józef Orliński gets an education from Kristina Mkhitaryan

Robert Carsen’s 2011 staging of Handel’s Rinaldo eschews both Handel’s patriotic subtext about the war England was then waging with France, and more contemporary echoes, in favour of a jolly romp taking place in the imagination of a bullied schoolboy. An essay question on the First Crusade triggers a fantasy in which he, sadly friendless in real life, is the glorious leader of a band who vanquish evil teachers, and he wins the heart of his teenage crush.

If you’re going to be silly, you have to do it with style, and Bruno Ravella’s revival could not be faulted. The choreography and staging were spot on and his cast threw themselves into the production with palpable glee. There were many lovely moments. The Christian knights charge into battle on bicycles, Rinaldo taking to the sky, still singing, in a clear nod to ET. The hero is tempted by bespectacled, pinafored clones of the beloved object. I particularly liked James Hall’s take on the Christian Magus, as a mad chemistry teacher in a lab complete with flashes and explosions.

Jakub Józef Orliński, recreating very differently the role he played in Frankfurt, was a magnificent Rinaldo, who brought a melting tenderness to ‘Cara sposa’, and whose assured coloratura technique and formidable breath control stood him in good stead in the long phrases of ‘Or la tromba suonerà’, sung lying on his side while performing leg lifts. In fact there was a whole altonation of countertenors – Orliński’s rich, bronze sound was a lovely contrast with the more honeyed tones of Tim Mead’s Goffredo and James Hall’s silvery clarity.

It is very hard to endue an adult Almirena with any personality, but she works very well as a teenage ingenue. Giulia Semenzato’s sweet, bright soprano brought an affecting innocence to the role and managed to convey sobbing in ‘Lascia ch’io pianga’ without breaking the line. Kristina Mkhitaryan’s Armida was splendid as teacher turned dominatrix in skin-tight black PVC, caning her gym-slip clad Furies with gusto, and her duets with Argante combined artistry with a considerable degree of sheer malevolence. If the bottom (sorry) ever falls out of opera singing, she has a bright future elsewhere. Brandon Cedel’s soft brown-sugar voice and nicely shaded phrasing gave Argante an unexpected gentler side. He is not evil or faithless, merely easily led, and very prone to falling in love.

All this was ably underpinned by The Orchestra of the Age of Enlightenment under the baton of the young Russian Maxim Emelyanychev, with particular praise due to the continuo and the sopranino recorder in ‘Augeletti che cantate’. Emelyanychev’s recent appointment as the principal conductor of the Scottish Chamber Orchestra means we shall hear him more often in Britain, which is excellent news.

Alas, the last triumphant chorus ends and we see the boy, back in his school uniform, wander, alone and disconsolate, into a darkened classroom. Nothing has changed. His future is all too real and not heroic at all.