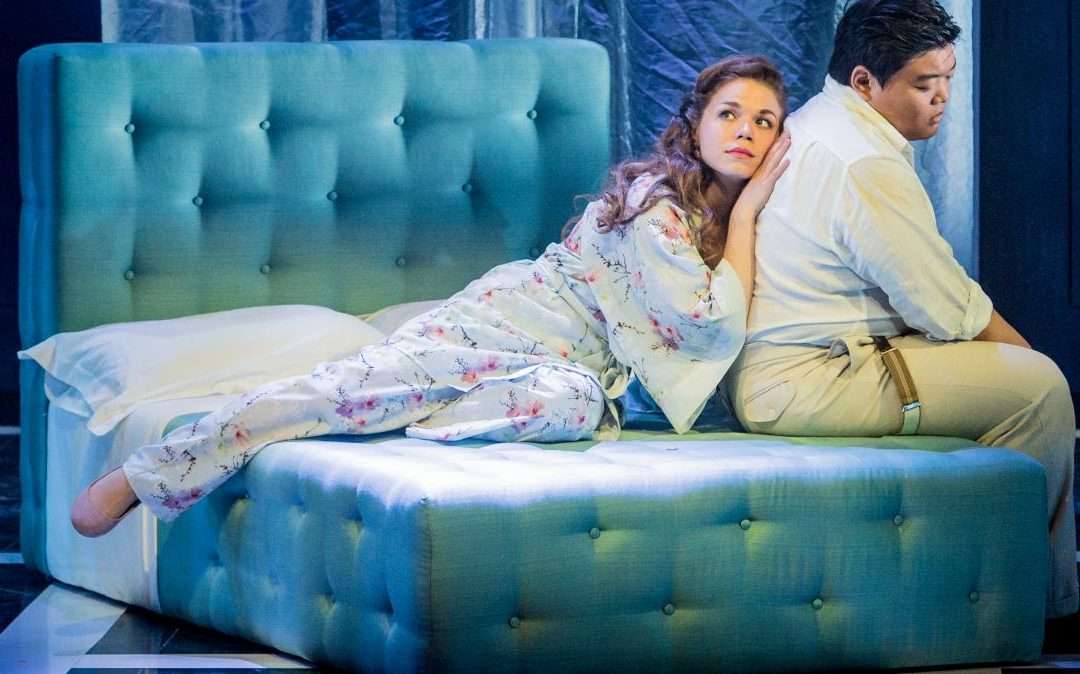 “Dramatic art is the art of a portraitist,” Gounod wrote in his Mémoires d’un artiste. “It must translate characters as a painter depicts a face or an attitude.” It is a curious proposition, indeed it might be thought to raise more questions than it answers. But, for me at least, Olena Tokar’s spellbinding performance as Juliette at Grange Park Opera on Saturday cast aside all uncertainty. The Ukrainian soprano gave a wonderfully powerful demonstration of exactly what Gounod meant by it.

Tokar’s performance, in the fourth act in particular, was a vocal and dramatic triumph, and the fullest of portraits. From expressions of love in the gently swaying 9/8 rhythm of the duet ‘Nuit d’hymenée, o douce nuit d’amour’, right through to a searingly defiant top B flat on “Je bois à toi!”, imbibing fake poison, she gave a compelling portrait of all the shifting emotions the character goes through. Gounod has placed it all there, clearly marked it in the score: she is to act “with firmness”, “resolutely” and later “in horror”, or “the mind wandering, imagining she has seen the ghost of Tybalt”, and those were exactly the attitudes that she conveyed so convincingly. She excelled in the Friar Laurence scene when the alarming prospect of a marriage of convenience – to add to the contested loving one she has just consummated – starts to loom. Her Act Four also brilliantly set up the tragic improbability of the dénouement in which, untrammelled by doubt, she will stab herself.

Standards at Grange Park Opera are high, starting with the vocal security and resplendence of both of the principals, Tokar as Juliette and the Korean tenor David Junghoon Kim as Roméo. Rather than operatic hopefuls, these are singers who already have an established presence on the opera stage. Tokar has performed Gounod’s Marguerite in Dresden, Kim also has a sheaf of significant credits to his name. Kim is less agile physically around the stage than Tokar, but for the joys of his emphatically resonant tone that was a price worth paying. His high, resonant ‘Je mourrai, mais je veux la revoir!’, which brought the third act (and the first half) to a close, still stays ringing in my ears.

There were other stand-outs among the cast: Olivia Ray was a strongly reassuring presence as Juliet’s nurse Gertrude, Mats Almgren was a convincing Friar Laurence, and although the voice of veteran Clive Bayley as Juliette’s father took some time to settle, he did eventually strike an authoritative tone. The choir has an important role and took it well, and the orchestra of English National Opera played for conductor Stephen Barlow with accuracy, sensitivity and vigour, the evenness and balance of the held wind chords in quieter moments particularly evocative.

Patrick Mason’s staging is in a design-conscious modern version of Italy as imagined by designer Francis O’Connor, expertly lit by David Plater. For Juliette’s balcony, think Ideal Home. There is young gang warfare afoot in the production à la West Side Story, with a bizarre selection of weapons of choice: not just knives but also baseball bats and at one point a small round coffee bar tray. It all might appear to be more of a spectacle than an elucidation of the action, but there is nothing inauthentic in that approach.

This was my first visit to the new-ish home of Grange Park Opera at West Horsley and I found myself hugely impressed by the benign acoustic – and completely bowled over by the scale of what the company has achieved. It has raised £10m from private-sector sources in 20 months; overcome all the planning hurdles to place the new theatre in the woods next to a fifteenth-century manor house; it has had a theatre up and ready to perform in within nine months of first breaking ground. And each night it creates a wonderful experience for 700 people in the audience at each performance in the beautiful and mature gardens of what had been a sedate inaccessible private house. It is a completely remarkable endeavour. Not to mention the criss-cross patterns on the external façade of the theatre of no fewer than 140,000 bricks. (VIDEO)

The whole Grange Park experience is definitely to be recommended, and in Olena Tokar this new production has a Juliette to remember.