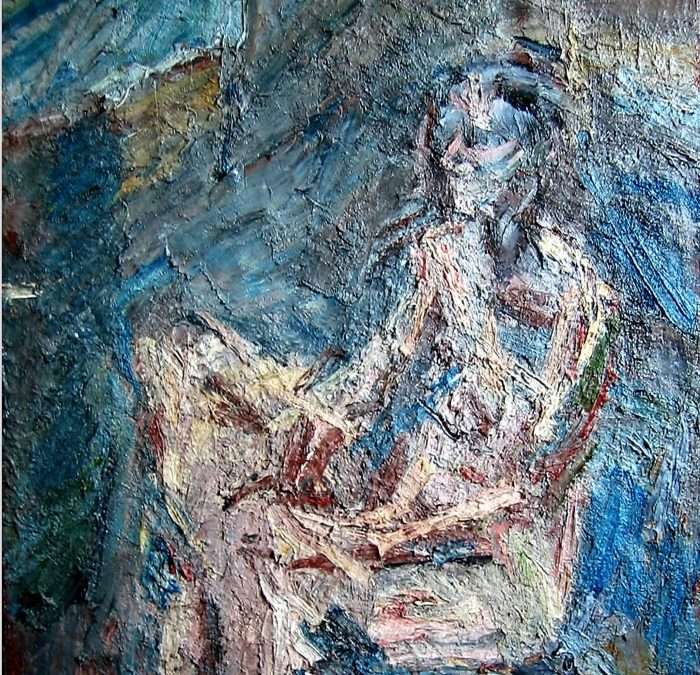 Retroactive: Drawing and Painting Retrospective is at the Cello Factory, 33-34 Cornwall Road, SE1 8TJ until 30 June. Felix and Spear are exhibiting Clossicks’ paintings along with Auerbach, Kossoff and Uglo etchings at 71 St Mary’s Road, W5 5RG until 6 July.

There is a tension, a longing, in this splendid first-ever retrospective of Peter Clossick’s work. Through prolonged observation and countless applications of the brush, pencil or charcoal he creates a sensuous image of inner thought.

This is slow object art. The opposite of fast art. And yet, there is a powerful sense of immediacy and presence. A sense of quiet contemplation from the very beginning.

It’s exciting to re-trace the restless movement of the artist’s mind as he seeks to capture the very becoming of a present moment. Out of heavily-worked masses of oil paint, a feeling of weightlessness emerges. His sitters are surrounded by mindscapes as their thoughts become conjoined with ours through the tactile substance of charcoal, pen or paint.

There is both permanence and a sense of the fleeting in the act of seeing and understanding. This is a highly conscious exploration of aesthetic sensibility: subject, object and how they transmute into something with a greater weight. Through aesthetic alchemy the countless, individual facets of each sensation come together to convey the sense of individual personality. Clossick likes Samuel Taylor Coleridge’s words about the co-existence of “a union of disparities” as being vital in artistic creation.

A seated nude Carol 1 (main image) floats in a sea of blue and turquoise brushstrokes. Her body is vulnerable as she shifts her knees and her profile is echoed in the shadows. Other ‘Carols’ are lost in thought, balancing on tilting chairs, as the studio floor swirls around them. A Schubert song springs to mind, Schein und Widerschein – semblance and reflection: the image of a loved one is glimpsed in mirroring waters.

These nudes live in an enchanted domain. Jane Pregnant, for example, lies in a light-filled space, as does the earlier Monochrome Woman. The enchanting Into the Void picks up a Leitmotif: Clossick is devoted to a plaster cast of Venus de’ Medici which lives in his Lee Green studio. In this version she turns towards an uncertain space, reminiscent of the Greek myth of Pygmalion whose statue mysteriously comes to life.

The thickly-applied oil paint has a momentum of its own which sets it beyond any strict control. Elements of uncertainty, moments of ‘not-being’, are vital: “I use thick impasto because to a certain degree it puts the control out of control, becoming more physical and haptic which I find more real. A combination of two forms of awareness which are necessary for depiction, held together in the mind as a single composite experience, ” he says.

There is a constant search to capture the indefinable, that thing just beyond our consciousness that acquires a magnetic attraction.

Is this the unknowable ‘thing in itself’ that leads to despair about the possibility of knowledge? I would say no. While there is constantly the feeling of aspiring towards the unknown, these multiple notations from the subject – come together form a new whole. Sometimes it is purely through monochrome – or nearly monochrome shades of black, grey and white.  At other times, especially in recent figure studies, it’s through orange, blue and other rich contrasts, subtly combined through wide bands of paint.

We are surfing on the edge of the known and yet to be known. Reality and human beings partake of the infinite, constantly challenging us to discover more. The Iraqi poet Adnan al Sayegh has said it better: “I have reached you… (and I cannot reach…)”.

Clossick grew up in Mornington Crescent and has deep roots in the traditions of the London Group which included Walter Sickert and Harold Gilman amongst its founders. He is a distinguished past president of the Group, one of the oldest artist-led organisations in the world. He has much in common with members such as Frank Auerbach, Lucian Freud and Leon Kossoff. But he has shed the extreme darkness that so often overwhelms the work of this older generation.

Here is a philosophy of reflection about ourselves and the Other of ourselves, materialised in marks on canvas and paper. Clossick celebrates our capacity to explore the complex liminal spaces and motions of things coming into being, the world moving in and out of our consciousness. And how we can share the knowledge that we exist as living, breathing human beings.