Sensuous Territories of the Mind 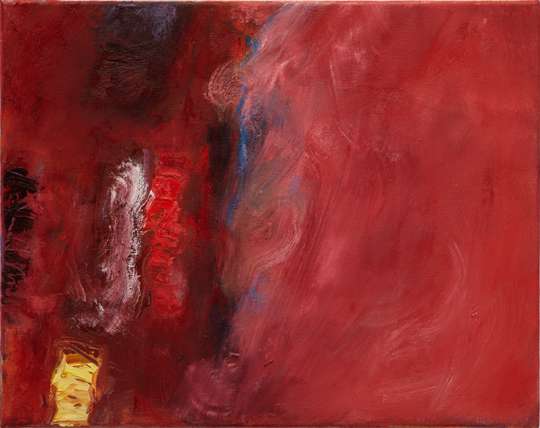 Rachel Clark’s intimate and yet coolly-objective paintings have the power to draw you in and take you on an aesthetic journey.

In figurative art, external reference points are easier to read. But in abstraction the viewer is encouraged to look inward as well as outward. This challenge perhaps explains why it has remained an undercurrent in British art for too many years. Clark’s recent work shows it is high time for a reappraisal.

Modulated reds hold the eye. The greater part of Liquid Sound and Exit, as you travel through light and dark, is in shades of pink, maroon and red. Soft flesh tones billow and feather out and suddenly intensify, as though in a gathering storm. You plunge into bottomless blacks, blues and violets. A flash of blue threads in and out of looping flares. Red and white jostle; a clear sense of location vanishes as you are drawn downwards by gravity and yellow light into an unknown world beyond the canvas.

The feeling is both cosmic and psychological. The colours flow in and out of a dark – but not empty – space. We associate them with the tumultuous beauty of fiery nebulas formed by interstellar dust light-years away. But in Clark’s latest paintings, these distant solar storms are tamed and internalised into objects of contemplation while still holding a powerful charge. The far away is brought home and humanised. And made consonant with our emotions.

It all goes back to the artist’s childhood when she would lie in bed and wonder how the universe might work and where we are in it. She asked herself where “nothing” might be and how you could create something out of “nothing”. A preoccupation with the existence of things, the mystery of life and what it means to be human has never left her.

From that early philosophically inclined approach it was perhaps a jolt to become an art student in an era when the dominant paradigm was figurative drawing from life. Nonetheless, these skills remain massively important to her and she has continued to teach life drawing and painting since 1976.

Understanding how to make a figure move and work in space is important for representational art, theatre and animation. Beyond that, it is a crucial and mental physical exercise that keeps Clark focused and alive, as indeed it does for other abstract practitioners. From that foundation more important things flow and abstraction is everything to her. What goes on behind what lies before you, in the other territories of the mind, is what really counts and needs questioning.

Her recent show at Fitzrovia’s Curwen and New Academy Gallery was appropriately called “Transitions”. She had begun to move away from her more usual horizontal/vertical format. This was often constructed around an axis from which loosely defined, multi- layered squares and rectangles unfold. Clark uses such shapes in many permutations. In her compositions we find the proportion of the parts to each other and to the whole is in the mysteriously generative Golden Ratio or Fibonacci sequence. That satisfying relationship is present, and yet the rule is as much honoured in the breach as in the observance. And that substitution endows a subtle movement and elasticity.

Quiddity (the essence or real nature of a thing) and Quietly Moving On are roughly structured around rectangles. Sometime the dominant vertical is two thirds of the way across the canvas, depending on whether you read from left to right or vice versa. In Quietly Moving On it forms a central spine. the floating shapes are enlivened by colours, marks and textures so that they move in and out of the visual plane. The lemon haze of Last Song is threatened by a black vacuum. Tangerine-tinged underpaint and disappearing pentimenti warm up the acid yellow, with lilac, pale salmon and light blue jaggedly stacking up the centre. The lingering presence of contrasting colours gives her work a sense of time and layering.

These paintings take a long time to make. They are painted over and over again, scraped down until she starts to get what she wants. Clark explains:

You can be battling away between what the painting says it can say, what I want it to say and the way I can say it. It goes on until the conversation between the painting and myself has ended. You are having a fight and then suddenly you can stand back and say that a new entity has arrived and it is finished.

And just as the final work is the result of an often tumultuous tug-of-war between the artist and the painting, so the viewing of it requires time and patience. These complex conversations are muted and hermetic. They refuse to give up their secrets too easily.

This is an edited version. The full text can be read at Glass magazine.