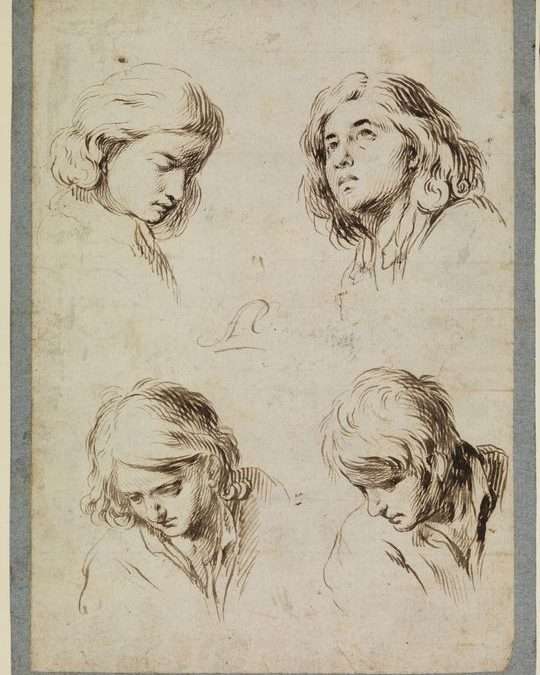 Four pen and ink studies of the head of a young man, possibly for a pattern book, by Antonio del Castillo y Saavedra (1616-1668), one of the drawings in the Spanish Line exhibition at the Courtauld Galleries until January 15. © The Courtauld Gallery, London

The Courtauld Gallery has one of the finest collections of Spanish drawings outside Spain which it acquired in 1952 when it received the bequest from Sir Robert Witt (1872-1952), who had in turn acquired them from the collection of  Sir William Stirling Maxwell (1818-78) the celebrated Hispanist. The exhibition features 40 of the 120 Spanish drawings the Gallery received and they are wonderfully varied and very beautiful. As to just what the Spanish Line is , well it is essentially diversity. It marks the completion of a four year research project and the publication of a complete scholarly catalogue of the Gallery’s collection of the drawings. This is a really enchanting show.

The fascinating thing about this drawing is that is is very highly finished and is one of a group of four – two are known, one is missing. It also appears to be a work in its own right and not, as many of the drawings are, preparation for another piece. It is firmly in the Spanish tradition which had a cult for saints. Many of the drawings are religious in subject, although what the next one is all about is unclear.

Just what is going on in this Ribera drawing in red chalk is anybody’s guess. The figure tied to the tree is clearly suffering, but what the seated figure is up to is another matter. It could be a study for something else.

Goya – below – is represented by this point of brush and black ink drawing which shows a musician apparently floating in mid air with a seated figure, a masked man oddly holding his hand to the mask, presumably keeping it in place, who is the dancer. It looks as if he is gazing up the woman’s skirts – if you think she is in mid air. The lack of any perspective gives that impression. They are probably separate attempts and have been given a united title.

The final drawing in charcoal is also the Gallery’s most popular postcard. Picasso drew the pigs, which were included in a painting he did in 1906, and gave them to his friend Gertrude Stein. She liked pigs.