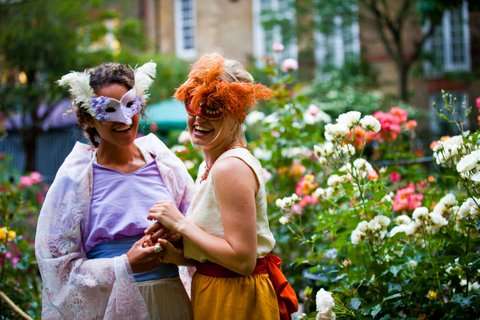 Hero and Beatrice at a masked ball in Much Ado About Nothing in St Paul's church garden, Covent Garden. (C) Hannah Barton.

Open Air theatre in London tends to automatically mean Regent’s Park but it is not the only venue – for the last eight years Iris have been playing in the gardens of St Paul’s Church in Covent Garden, they usually do a Shakespeare play and then something different. This year it is Much Ado About Nothing and Treasure Island. The former opened to highly favourable reviews and while it is a slightly pared down version of the play since there is a cast of seven that is inevitable, and the cast display considerable versatility doubling roles and in one instance quadrupling parts. The result is a sparkling version of the play with a very good Beatrice and Benedick in Anne-Marie Piazza, a veteran of the garden, as Beatrice and Nick Howard-Brown as Benedick. Their war of words could not be bettered and both of them are familiar with the problems of open air theatre – the surrounding noise – and know how to cope. The Covent Garden piazza and the surrounding streets make quite a lot of noise which does invade the gardens. The audience move from site to site and then the final scenes are played inside the Church itself. Iris was created in 2007 when it performed T.S. Eliot’s Murder in the Cathedral here and that led to other shows, here and elsewhere. They have a schools workshop programme and schoolchildren do form some of the audience. In April they spent eight hours one Saturday night surprising unsuspecting tube travellers by performing scenes from Shakespeare in Covent Garden tube on the platform andin the lifts, an idea suggested by the outgoing station manager. So brave the risk of rain, take an umbrella or a poncho – if the worst comes to the worst they will go inside the church although that does take away from the special slightly masochistic delights of performing and watching in the open air. It could well be happening in a park near you.