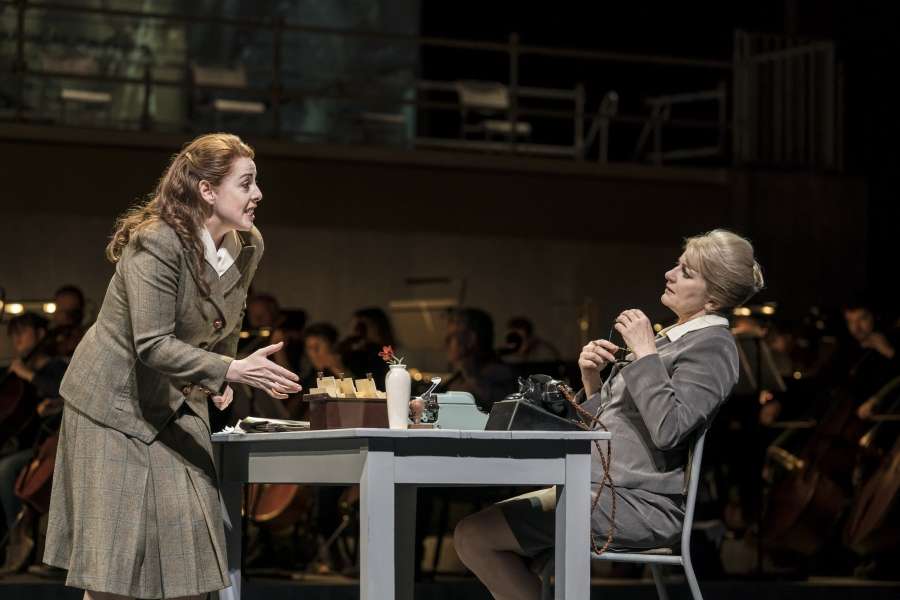 Well known to American TV audiences as the composer of the children’s Christmas TV opera Amahl and the Night Visitors, Menotti is hardly a household name in Britain. This work adopts the Kafkaesque conceit of endless waiting for official cogs to turn; the heroine never meets the eponymous official, only ever reaching the outer offices. To this Menotti adds a very mid-20th topic of rebels and revolutions familiar from Malraux, de Beauvoir and others.

A one-act opera, this is vocally a chamber work, with the rebels, the people waiting for visas to leave the unnamed country, police officers and a receptionist. As in the WNO production of Dead Man Walking, the action takes place downstage, with the orchestra – divided by a walkway a bit like a traverse theatre – upstage, and the occasional visual interest of comings and goings on a balcony behind that (designs by Misty Buckley). Scenes are named in back projections. The scenery is changing back-wall stills of period passport photographs and documents, including torn up scraps of the UN declaration on human rights, adopted the year before the opera’s premiere

The heart of the production is Giselle Allen’s Magda Sorel, wife of rebel against the police state John Sorel (Gary Griffiths) who, in a dramatic opening, enters with a bullet wound and must flee before his pursuers catch up with him. That takes Griffiths offstage for much of what follows (except for visiting his wife’s dreams) until he defies danger to try to visit her at the end. The third member of the family, and third voice in a key early trio, is the Mother (Catherine Wyn-Rogers). Their story is one which opera – where men stand up to authority (think Don Carlo) while women suffer, mourn and die (think every opera in the repertoire with a soprano in it) – feels particularly well designed to tell.

Allen’s several soaring arias were not far from those in A Child of our Time: premiered only five years earlier, Tippett’s oratorio is another work struggling to make art out of political violence and suffering. Wyn-Rogers’ lullabies to the dying baby were playful, affecting and strange.

Richard Wiegold’s policeman was smooth and creepy, close cousin to Rocco and Scarpia. His singing about liking Magda Sorel, and encouraging her to betray if not her husband at least his friends, felt more like sexual harassment than interrogation.

The orchestra under Justin Brown had an interesting score to work with. Sometimes harsh and dramatic, with crashing percussive piano chords. Sometimes sweet – the women’s lines in particular almost took us back in time to Romantic opera. Indeed, the yearning ‘A day will come’ was almost Butterfly’s ‘Un bel dì’.

The headscarves, hats and coats (costumes by April Dalton) place this in the 1940s, but the stories it tells of refugees and paperwork could have come straight from Yarl’s Wood, as no doubt the cast, director Max Hoehn and artistic director David Pountney know well.