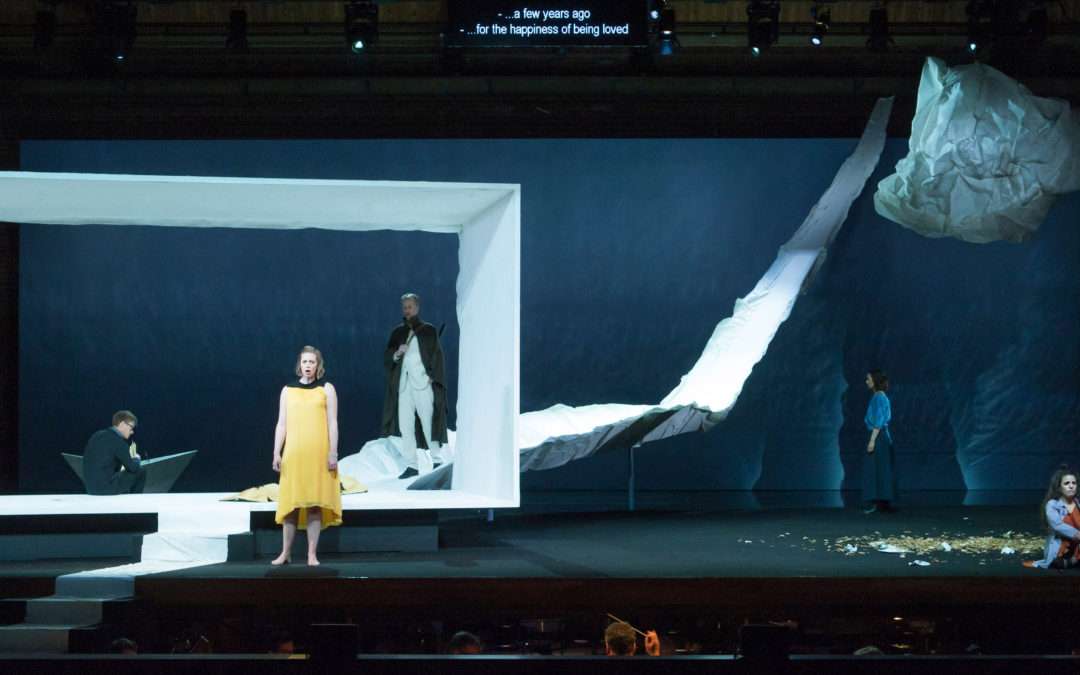 The Hunting Gun by Yasushi Inoue, a great Japanese 20th-century author, is a complex, subtle tale involving three women, sexual betrayal by one of them with the husband of another, a daughter’s viewpoint, and the adulteress’s suicide. We get diverse recollections of the same events. But music is linear, and successful operas, however much reminiscence they contain, usually move along a coherent time-scale. Thomas Larcher’s opera, which had its premiere at last year’s Bregenz Festival, pursues an unusual game, running contrary also to the theatrical clock. I found its overriding process both pretentious and frustrating and – in terms of the music given to its characters to deliver (and considering there is little else descriptive on offer) – disappointing. The three women are not musically well distinguished from each other; men (a poet narrating, and the co-respondent) are cyphers. How is the audience supposed to relate to such a game? Whom to trust? What to believe? And does it mean anything that matters?

All fiction depends on the truth purveyed by the narrator. But opera is above all a confessional artform engaging the audience with its compelling individuals. If the weaving together of different viewpoints invites us to perceive some objective range of meanings, we may end up simply not knowing where we really are, and wondering why we bother. Of course in opera a ballad which we hear sung may depart from what we see happening – but what if the inner thoughts and feelings neither add up well nor fit truly and effectively together?

It seems retrograde to me for Aldeburgh to launch, as star item this year in Britten’s festival, an opera neither new nor British. It is a barren era for opera – and George Benjamin’s praised operas are, like this Larcher work, conceptual in a way that I found disengaging, as was David Sawer’s Skating Rink for Garsington last year. At the Linbury there has been a clean-out of existing projects. Aldeburgh, thanks to Britten royalties, at least has the income to commission, though it has not done that much recently.

With new opera a fresh composer tries their hand, with the lyrical reflective and descriptive capacity of music, its ability to invest different confessional exercises with individual character. Larcher relies on sound-effect punctuations of his sung scenes, and for his vocal writing he employs indiscriminately some repetitive arpeggio-style vocal lines. His writing is simpler to grasp than music conceived when diatonic was thought dull or stuck in the past, but these would-be melodious lines are unredeemed by his occasional break-outs into stratospheric pitches from what began to feel like almost-recitative, often involving just one tone up or down. In opera, characters are what they sing. Larcher’s close two-step melodies were largely anonymous. And the libretto felt profoundly undramatic, conceptual and mind-freezing. Which made for a dull evening with scant theatrical vitality.

Karl Markovics’s hyper-simple production and Katharina Wöppermann’s designs added little except a cool atmosphere. Ryan Wigglesworth conducted Larcher’s two-dimensional music with typical competence and attention. Sarah Aristidou as Shoko (the niece of Misugi the adulterer) has the most sympathetic role, and Iris van Wijnen as her tall suicidal yellow-clad mother (who finally takes poison offstage) the most striking. But all these emotions kept in the family, flying around in theory with nowhere to go, tell one very little of actual interest. Compared with the  overwhelming emotional engagement of Britten’s Rape of Lucretia, Larcher’s opera seemed to me like a yawning hole in the canvas of life.