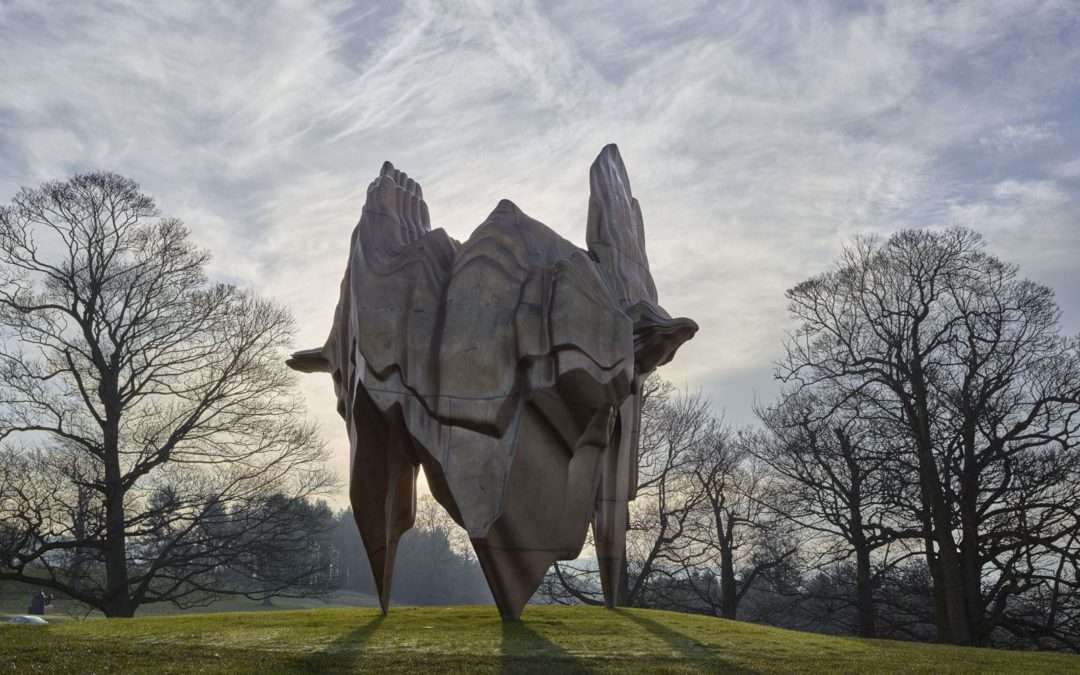 Where in a two-and-a-half hour journey from London can you see world class art in breathtaking landscapes? No, not in Monet’s Normandy or even the Louvre, it’s within England, in God’s own county, Yorkshire – where else?  Nor is it a joke. Nowhere else in the world is there a changing programme of curated exhibitions of modern and contemporary sculpture but at the Yorkshire Sculpture Park near Wakefield.

Unlike other places that concern themselves mainly with sculpture, such as Hakone Open Air Museum in Japan, the Yorkshire Sculpture Park has no permanent collection. True, there is site specific work which is a little tricky to relocate, but the curators concentrate on changing exhibitions displayed within the landscape.

That landscape is a 500 acre park, land that appeared in the Doomsday Book as wasteland, laid bare in William the Conqueror’s campaign to harry the north and subjugate his subjects there. What was to become the Bretton Park estate passed to the Wentworth family in 1407, but it was not until the 18th century that Sir William Wentworth build Bretton Hall and his son, Thomas, brought in Capability Brown’s contemporary, the less well-known Richard Woods, to improve the landscape, shaping it into more of what we see today, and it was Woods who formed the country park and lower lake. Known as the master of the pleasure ground, he liked variety and incident to invade his designs.

With over 80 sculptures set in the park’s stunning landscape, variety and incident remain key today. The present crop of sculptures on display includes James Turrell, Henry Moore, Andy Goldsworthy, Anthony Caro, Magdalena Abakanowicz, Jonathan Borofsky, Antony Gormley, Sophie Ryder, Joc Jon Josch, Magdalena Abakanowicz, David Nash and Ai Weiwei among others. Niki de Saint Phalle’s radiantly colourful Buddha sits meditating with its one, inner eye, Barbara Hepworth’s The Family of Man, made to be seen on a gradient have stood on an incline since 1980. Next season the range will change, encouraging return visits.

There are visiting artists – in March Ayesha Tan Jones and Amp Art were in residence. Nor is it all out of doors. The Underground Gallery, adjacent to the visitor’s centre, is currently showing Tony Cragg’s exhibition A Rare Category of Objects. In the Upper Space are Anne Purkiss’s photographs of sculptors. And then if you’re weary of looking and walking, the restaurant serves a range of fare to enjoy while you look out over the park and view its mysterious sculptural inhabitants through the restaurant’s vast picture window.

One of YSP’s founding principles is to make art accessible. You can get up close and touching is encouraged. There is an emphasis on process through workshops and other activities. They work with the local health service promoting social well-being, education and learning.

Hugely popular locally it well deserves to be a destination from further afield. Reachable on a day-return from London, future plans are geared to making one linger longer. A new gallery and visitor’s centre, designed by architects Feilden Fowles, is planned to open next year at a different end of the park to the current one – getting a gourmet chef for the new restaurant was talked of as were evening openings. Bretton Hall is being made into a hotel so a sculptural weekend seems like a must, especially with the Hepworth in Wakefield and the Henry Moore institute a half hour’s drive away in Leeds.