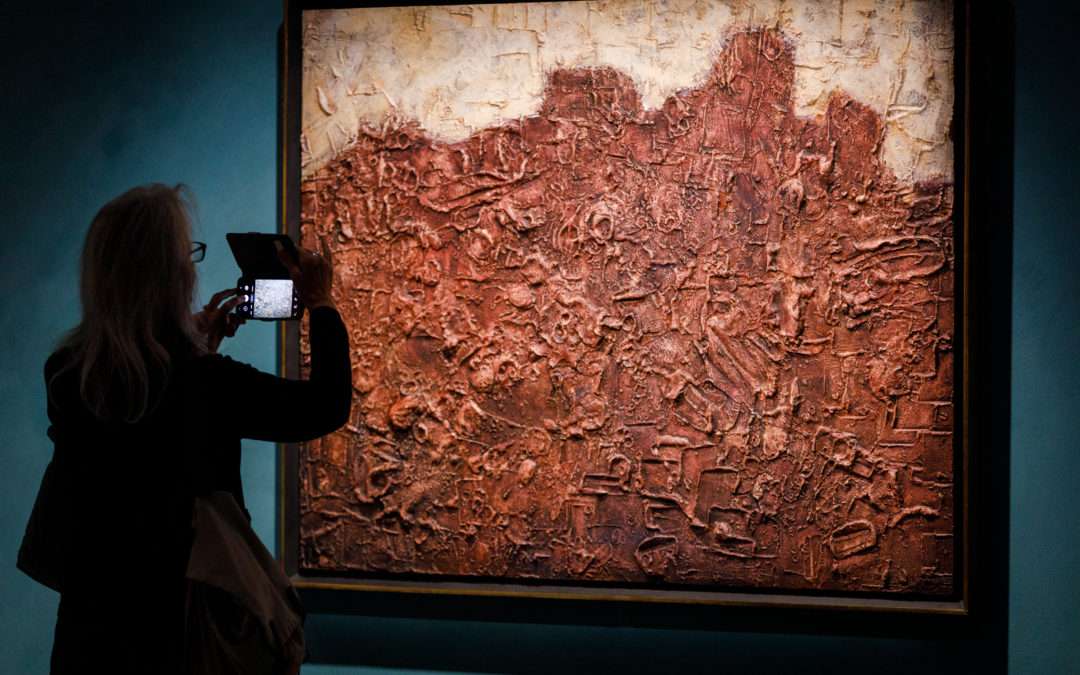 Reacting against academic art and the classical tenets on which it is based, Dubuffet sought meaning in overlooked, base matter and the forgotten in society.

Born in 1901 in Le Havre, he decided early he wanted to become an artist. He attended night classes in life drawing, sculpture and painting at the École des Beaux-Arts during his school years. Then he went straight to the prestigious Académie Julian in Paris. But he left after only six months, reacting against teaching which he found superficial. From then until 1942 his life, like that of many young men, was chequered. He worked as an artist, made art-world friends like André Masson, Antonin Artaud, Tristan Tzara, Max Jacob and Michel Leiris, undertook his military service, travelled to Buenos Aires where he claimed he no longer wanted to be an artist, learnt Spanish and worked on construction sites. Returning home he joined the family wine business but continued to paint, study ancient Chinese ideograms and Egyptian hieroglyphics, got married, divorced and married again.

The present exhibition and accompanying publication begins in 1942, the date at which Dubuffet again devoted himself fully to art. From that time on it can be said he finally found his way. That way was through the transgressive technique he used to express ideas forcefully, getting under the skin of both his subjects and the viewers, and that can be seen through the exhibition. He was phenomenally well-read and throughout his career wrote copiously, and sometimes contradictorily. Dubuffet developed a practice using an ever-widening range of materials new to art as well as techniques, one after another; drawing, printmaking, making artist books and assemblages, sculpture.

He also wrote jargon texts, and collected, published and promoted the art of mystics and psychiatric patients, Art Brut. The exhibition includes two rooms dedicated to Dubuffet’s collection of Art Brut and given the untrained, and hence uninfluenced by academic thought, of its creators. He first came across the work of the visionary Clémentine Ripoche during his military service when he was stationed in the Meteorological Office in the Eiffel Tower in 1923. Ripoche saw ‘visionary’ scenes in cloud formations. In 1945 he made a trip to Switzerland with the writer Jean Paulhan, literary critic and publisher, director of the Nouvelle Revue Française, and the architect, Le Corbusier, with the purpose of researching artists living in psychiatric care. It started a lifetime’s obsession and a collection of many thousands of pieces.

With its starting point in 1942 it is easy to say the grim years of the Occupation were Dubuffet’s breakthrough but that is to overlook the mind of the wine merchant. Those who know about wine know the indivisible tangible experience of tasting, that are the result of inter-connections between the soil, best if impoverished, the significance of old vines, mainly gnarled, the possibilities in the making and aging processes that produce the prized qualities described as earth, tar, leather that make a mature, aged wine a much desired thing of beauty.

Dubuffet tackled his subjects in series, one at a time, and both the publication and the exhibition follow a chronological path. Beginning with his series Walls, ‘Messages’ scrawled over French and German Newspapers influenced by Brassaï’s Graffiti photographs, published in 1933 in Minotaure. He would walk the streets in search of the elan vital of those years, the graffiti cut into walls at knife point. They incorporate the uncertainty felt throughout the Occupation of who could on trust. Still such graffiti must surely also reference the horror of the basement cells at 11, Rue des Saussaies, the Gestapo headquarters, where prisoners were held awaiting interrogation and torture.

After the Liberation, capturing the urgency of these marks and messages, Dubuffet produced lithographs with the master printmaker, Fernand Mourlot. Working on the lithographic stones with unorthodox tools like bottle shards, sandpaper, wood and razor blades. The prints are printed on thick paper from the Auvergne, presumably thick enough to cope with the surfaces he created on the stones. It is a pity none are included in the exhibition, but they may not survive.

A series of portraits of Jean Pauhan follow, one of which he gave to the right-wing, wealthy, American expatriate hostess, Florence Gould. While he described himself as fiercely apolitical, as a wall board points out in the exhibition, very little has been written of his prejudices. Gould encouraged him to depict other artists and writers who attended her weekly salons. This he did depicting among others the poet, Henri Michaux, the artist, Bertelé Mondain in haute pâte. This was a technique that while used by others, notably Jean Fautrier, in Dubuffet’s hands was concocted from complex mixtures of paint, sand, gravel, coal dust, asphalt, frayed string and mirror shards. What survives are perhaps the less loaded. Done from memory, this series show Dubuffet clearly had a facility for capturing a likeness an aspect that is not apparent if one does not know the sitters.

In April 1950 Dubuffet began a series of female nudes, splaying them out like specimens for dissection. To the viewer they are like victims of accidents with a steam roller. The paint, if we dare call it that, reticulates and separates in runnels across their flaccid flesh. They repel, like the oil and water medium in which they are executed, yet compel the viewer to look, mesmerised.

Dubuffet then used his pâte technique on landscapes with high horizons. Notions that these textures are haphazard can be dismissed. His surfaces are carefully controlled. He pressed objects into his malleable medium, subtly moved them, adding and subtracting to differentiate the textures. Skies are added later, painting them over the top of the landscapes. Photographs show him working horizontally on the floor. More two-dimensional pen and ink drawings in this series indicate his obsession with overall detail.

Up to this point the overriding colour of his work is brown. Now muted colour appears in the form of assemblages using butterfly wings, which in our increasingly ecologically-aware times makes one wonder how many butterflies died in the making of these pieces. Perhaps that is in part the point.

Assemblages continue through a more colourful series of gardens. Figures reappear, in what again looks like random applications of medium. But here we may see him following Ripoche finding his subjects in the splashes, stains, and mixed colours (also advice given by Leonardo for inventing scenes). Dubuffet has carefully added lines into in what appears randomly applied colour and texture, strengthening the impression of eyes, mouths, noses and fingers. As with the skies in his landscapes, the backgrounds are applied last giving them form. The illusion of randomness is a carefully crafted. These textures leads to three-dimensional statuettes created out of discarded scrap, twisted vines, natural sponges, car parts.

Yet for all his struggle to break free of academic art he still adheres to the academy’s basic subjects: portraiture, the nude, landscape. Returning to Paris from a number of years in Vence in the South of France and finding Paris changed, this led to another series, Paris Circus. Colourful, frenzied, funny his canvases team with people and include signs and messages reminiscent of his Walls series but with a very different air. Despite all his radical technique, does he break free from the use of shop bought pre-stretched canvases, not that is until the 1970s when with his vast canvases of his red, white and blue series L’hourloupe he developed them into a piece of theatre, Coucou Bazar. But returns to the convention of the rectangular canvas for his final series Mires for the French Pavilion at the 1984 Venice Biennale.

We look at this exhibition through eyes now accustomed to much more radical art and it is easy to forget how very startling these works were when first shown. Dubuffet’s first solo exhibited at the René Drouin Gallery in Paris, in 1946, though gaining critical comment, outraged the public, five paintings were slashed and the guest book was filled with insults. A much better reception followed the next year at Pierre Matisse’s New York gallery. He no doubt had the ability to influence taste and indicate desirability did not always come in conventional ideas of classical beauty.