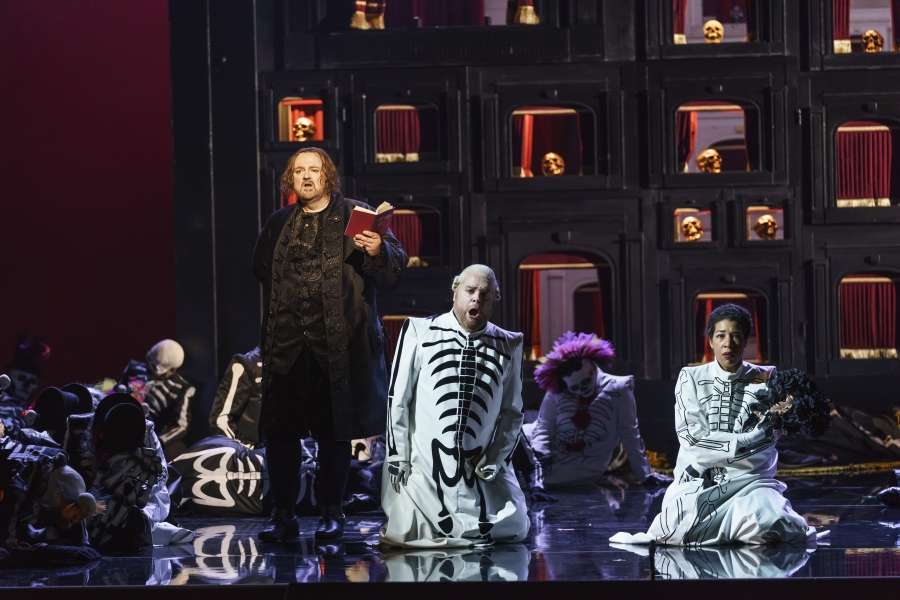 Director David Pountney plays Verdi’s tale of love, death and vendetta with creepily comic touches. Every now and then the chorus get together for a conga line or work coordinated dance steps and hops into their perambulations. This compromises our involvement with the tragedy, but it matches the music perfectly. Antonio Somma’s libretto doesn’t actually include the lyrics ‘with catlike tread’, but runs them pretty close. Pountney has simply taken an awareness of Sullivan’s parodies and turned it back onto Joe Green, whose habit of writing jolly music invites this treatment. Certainly the orchestra was onside, with Carlo Rizzi leading them in very crisp playing, enjoying the dance but with sensitive accompaniment of the singers as well. Amelia (Mary Elizabeth Williams) was particularly well supported.

The introduction of Riccardo (Gwyn Hughes Jones), rising up from a coffin on which Oscar (Julie Martin du Theil) has been lying like a tomb effigy, recalls the affectations of Gothicising pop stars, as does Oscar’s black-leather costume. As the mark of a side of Riccardo which has drawn some hostility, this is fine. But it makes appreciating him as a generous and loving ruler a touch harder. Still, the first act goes well. Julie Martin du Theil, trousered as Oscar, is mercurial, wide-eyed and excited. The visit to the dark-magic prophetess Ulrica is very effective: Sara Fulgoni towers over events amid darkness and stage smoke. She is surrounded by female acolytes in black (of course) with splashes of red blood.

As with cup finals, a playful first half gives way to a human-drama edge-of-seat second. Mary Elizabeth Williams comes into her own, rips powerfully into her aria on love and duty, and then powers forward into a show-stopping duet with Gwyn Hughes Jones. The audience was pulled out of its earlier polite appreciation into outright adoration, and rightly greeted everything with roars of approval all the way to the penalty shoot-out curtain calls.

The Wimbledon-umpire high-chair tactic which had worked so well for Ulrica is used again when baritone husband Renato (Roland Wood) meets bass conspirators Tom (Tristan Hambleton) and Samuel (Jihoon Kim), where it makes no sense at all. At this point we need everyone huddled darkly and deeply close together, not spread out both horizontally and vertically.

In the concluding masked ball of the title, everyone is kitted out for the day of the dead. This makes the earlier conversation about how the conspirators will recognise one another a little odd, but is visually compelling, so let’s not sweat the details. The death of Riccardo was confusing. Wasn’t that a body double taking the blow? Riccardo then sings generously about Amelia’s purity and dies for no obvious reason. Perhaps I blinked at a key moment.

Designs are largely red and black. Raimund Bauer’s sets offer the fronts of buildings in which each window is a miniature proscenium-arch stage complete with red curtain. When these rotate so we view them end-on, it makes the stage look a bit like a library. And when Amelia is put away in what must be a very narrow cupboard, it’s faintly worrying.

Fabrice Kebour’s lighting pours red light onto the red and black set full of red- and black-clad (costume designer: Marie-Jeanne Lecca) singers. In the opening scene, the conspirators are dressed in top hats, swirling opera cloaks and masks as though they’d crept in from moonlighting in Phantom of the Opera. For the tryst, they have had predators’ ears and masks added.

There is no attempt to locate the action anywhere in particular, which for this opera is even more reasonable than usual, as you could justify setting it in Sweden as a Scandi crime-drama, but several other parts of the world would be fine given the changes forced on Verdi by the censorship.

It’s a real winner, and deserves a packed-out run.