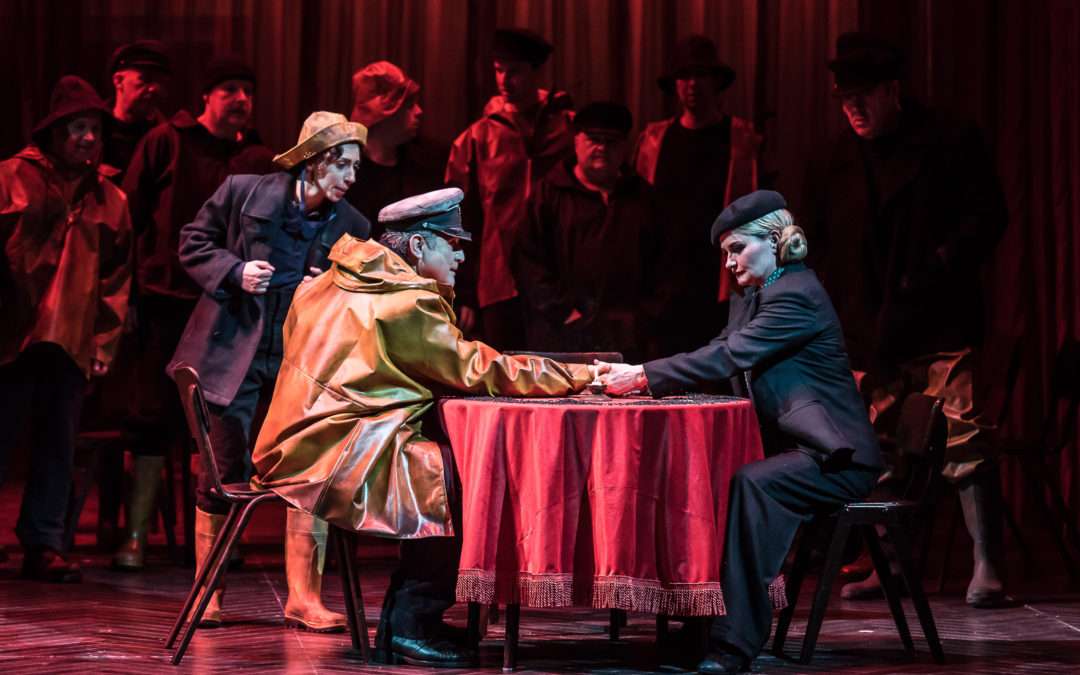 Who is to blame for the less than wonderful launch of Opera North’s latest Verdi? – the marvellous Un ballo in maschera, with its unconsummated central love affair, superstition and violent politics. Richard Farnes is widely accepted as a major British conducting talent. Certainly the orchestral playing was fine and expressive, as this carefully-coloured score requires. But the abundant excitement in the piece only fully ignited during the scary night scene at the scaffold where Amelia is supposed to be picking a herb that will rid her of the passion she feels for King Gustavo (whose main political advisor and friend is her husband Anckarström). The declaratory, passionate duet between Rafael Rojas and Adrienn Miksch as Amelia (new to the company with a voice full of interest and great technique) rose to a thrilling level – though Rojas was never remotely as persuasive as in his Andrea Chenier here. But quality singing makes a big difference, and Farnes managed it all stylishly.

For much else that did not work I blame the director Tim Albery and his unimaginative designer Hannah Clark. Using a basic rectangular room structure stretching deep upstage meant no feeling of outside and scary tempestuousness could be called up for the night-time scaffold. Madame Arvidson’s fortune-telling could have been happening in a sort of Starbucks with round tables and no magic-making equipment. The ball scene resembled a station waiting-room with long padded seating across the stage and no dancing or space for that, while Anckarström’s study – where the leading conspirators’ lots were drawn to select who would murder Gustavo – was positively palatial. The conspirators and courtiers were dressed in heavy coats that might have been a uniform job-lot from a chain tailor’s bankrupt stock, and the chorus moved with studied pomposity but little convincing sense of fury at their over-theatrical ruler.

The clear message was Opera North could afford nothing better. But imagination and talented direction need not be expensive. Tim Albery was a big factor in Opera North’s noble past. But he had evidently lost his touch for intelligent motivation of chorus and principals – such as Annabel Arden brought to the company’s splendid Chenier. Phillip Rhodes seemed completely anonymous as Anckarström, one of Verdi’s greatest baritone roles, while Patricia Bardon, usually strong and splendid, made little impact as Ulrica. It seems both Richard Mantle and Christine Chibnall (presiding geniuses of this best of our British companies) rely too heavily on familiar talents, some of which have faded fast. Tereza Gevorgyan as Gustavo’s cross-dressing but firmly female secretary Oscar tried hard to stir excitement with her contributions – but thereby mainly stood apart from the rest of the sleepy staging.