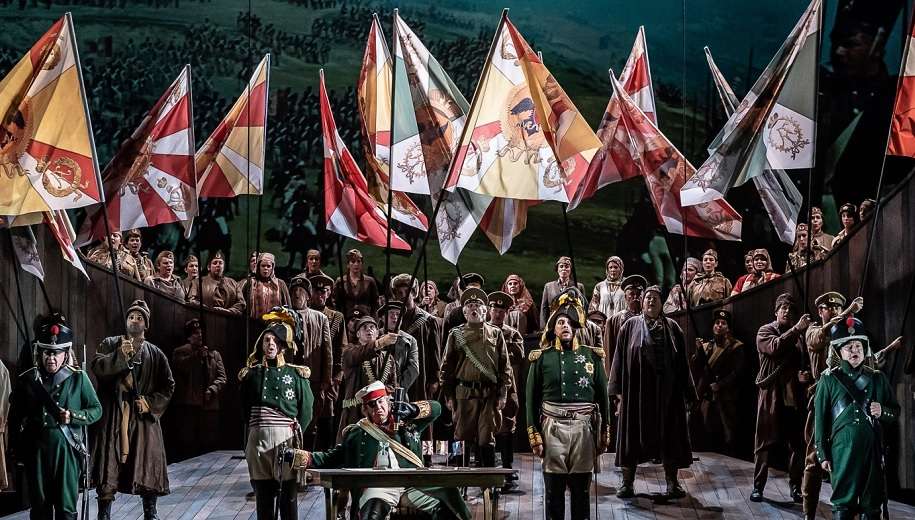 Facing Tolstoy’s massive novel combining epic and romance, Prokofiev had to choose how far he was composing a war horse and how far a pony. Sadly, a Stalinist committee designed a camel for him.

The novel’s Pyotr-called-Pierre (Mark Le Brocq), Natalya-called-Natasha (Lauren Michelle), Andrei-called-Prince (Jonathan McGovern) and others are mostly present in this Richardsonian tale of love, courtship, corruption, seduction and elopement that faintly recalls Eugene Onegin. The invasion by Napoleon occurs and gives the WNO chorus plenty to do. this is partly because bolted on is an endless sequence of patriotic anthems, reminding us that this was being composed in wartime with a German army at the gates of Moscow in a rerun of history, and with Stalin demanding morale-boosting crowd-pleasers. These are so ghastly at several levels that perhaps Khrennikov had offered some helpful hints. All the more credit to WNO for making them as good as they possibly can be in renditions that suggest that the company would do a very nice Les Misérables if ever they felt so inclined.

There is little to be said in defence of the comic German officers or the mind-numbingly repeated insistence that the French were defeated by an uprising of peasants with pitchforks. That Stalinist committee clearly believed that it was impossible to say too often that this was a rich man’s war but a poor man’s fight. How wrong they were.

The production opened with a surprise that would have entertained Haydn when the lights abruptly went out, the baton came down with no polite welcoming of conductor and concert master, and a fortissimo chorus immediately sang that the enemy would be crushed. Stravinsky once said he wouldn’t feel safe in a building that the architecturally-trained Xenakis had designed. On the experience of this opera, I’m not sure I’d feel safe in a car driven by Prokofiev.

Notwithstanding all this high-quality shouting, the finest moment in the show is Andrei’s deathbed, nursed by Natasha. The design – we appear to look down through a skylight, so that the recumbent prince is in full vertical view – is thus not yet-another prone-swansong. Le Brocq’s lyrical duet with Michelle brought out the best in both. Le Brocq had seemed a little lost in his own role in the nocturne beginning of the tale, but the voice warmed and either the singer or the character grew in confidence. Michelle managed the tricky business of being a sweet but ungrounded teenager attending her first ball very well. She even manages to look faintly like Audrey Hepburn at one moment, which is quite clever of her. She is under the wing of James Platt’s Count Rostov, who has been designed to look like the winner of a Brian Blessed lookalike competition. Fortunately his singing, though, is suitably noble and sweet.

The frenchified Hélène (Jurgita Adamonyté) in a red gown and Anatole (Adrian Dwyer) in a red uniform sing and glide the vamping and lounge-lizardry very well.

The show’s most effective torch song, however, is not Pierre or Andrei meditating on Natasha, but Simon Bailey’s Kutuzov singing of the wonders of Moscow. This was a poignant reminder that Prokofiev really could produce the patriotic, melodic, socialistical-realistical goods, and that the government enforcers should have left him alone.

The orchestra under Tomáš Hanus is a wonder. It does muscular a lot of the time as the score is like that: the snare drums don’t have long to cool down between drum rolls as Prokofiev wants to make sure we don’t forget that this is a war piece, and the bass winds are also a recurring menacing presence. But it does tender as well.

David Pountney’s production has some rudimentary walls and windows (set design: Robert Innes Hopkins), but the main feature is a continuing upstage cinematic projection, opening with a Cyrillic script which I take to be Tolstoy’s manuscript being written. This is twinned with a dumb-show of Tolstoy seated at his desk writing his novel at the beginning, and Pierre writing (perhaps his memoires) at the end. Unfortunately what we are given is the white-haired, white-bearded prophetic photograph of the later years, not the vigorous man in his thirties who wrote the book, but perhaps that just proves me a founder member of Pedants Anonymous.

There is also some Cyrillic graffiti on the set, with Tolstoy, War and Peace and Prokofiev chalked up alongside Moscow and Stalingrad.

The projection continues, showing individual characters entering through a doorway and striking poses as though introducing themselves. During the dancing, chandeliers wander around the ballroom like Hogwarts staircases. Passages from an earlier film of the novel’s battle scenes accompany the military scenes. This all works well.

The audience remained silent throughout, with a couple of faintly pattering failed attempts at applause for solos, like the Police Federation listening to a speech from the Home Secretary. However, come curtain calls they received all performers warmly, with Michelle, Bailey and the orchestra getting the audience vote.