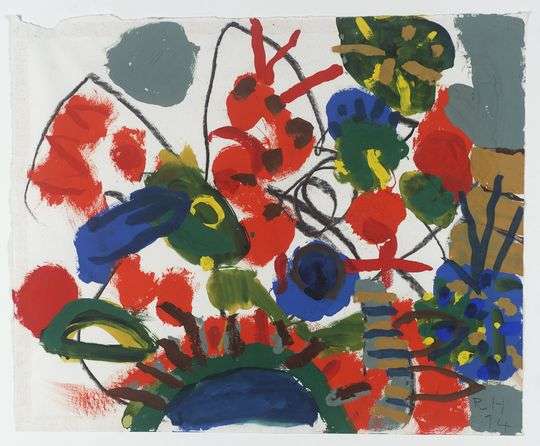 Watercolour is a large and comprehensive survey of British painting in this medium, from the Middle Ages to the present day. For much of the earlier centuries it was considered an amateur art and at Tate Britain the show set sout to prove that previously held perceptions changed, particularly since many of the artists in the 18th century painted in watercolours as well as the more regarded oils.

The paintings chosen start in 1200 with illuminated manuscripts and go through maps, miniatures, topographical scenes and works by the famous, including Girtin, Turner and Sandby, to modern watercolourists such as Patrick Heron and Howard Hodgkins.

There are many gentle paintings, those of landscapes and street scenes, flowers and trees. More defined, loud religious imagery comes through in works like Burne Jones’s The Annunciation and Edward Burra’s strongly coloured Mexican Church. In the section entitled Watercolour and War the harsh reality of the battlefield is seen in Charles Bell’s Sabre Wound to the Abdomen in 1814, and in Paul Nash’s Wire (1918-19), while the six small portraits of soldiers (all 1918) who have been facially disfigured, stop one in one’s track.

Few artists have more than two paintings in this history of the medium. It is not until the final room we see that watercolour has advanced to the world of Tracey Emin and Sandra Blow where large splodges of colour tell us we are in the modern era, a place one imagines the organisers avoided in earlier centuries.