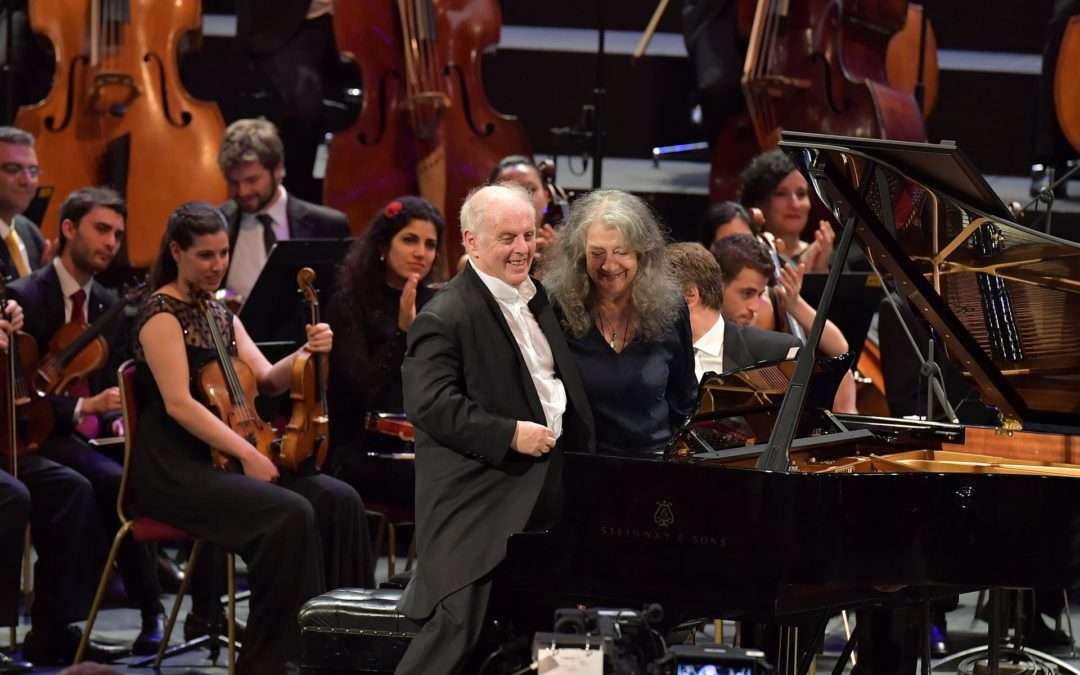 Daniel Barenboim is one of classical music’s few genuine superstars. In the first of two appearances at the Proms this summer, he brought the orchestra he co-founded (with Professor Edward Said) on the eve of the millennium, the West-Eastern Divan Orchestra, to demonstrate the harmony it achieves in the face of political and human turmoil. Young Arabs and Israelis play side by side, together with a few musicians from the city of Seville, where their base is. Divan is Persian for a sheaf of papers (such as a poetry collection) – hence both the office where one might find such a sheaf, and the bench outside it. The German poet Goethe, aged 70, called his last poetry collection West-Eastern Divan, and Said borrowed the name for an orchestra which continues to thrive, and which this year opens a conservatoire in Berlin. Welch eine bunte Gemeinde! / an Gottes Tisch sitzen Freund und Feinde (What a colourful community! Friend and foe sitting together at God’s table), one reads under Goethe’s version of the sayings of Hirmit-Nameh.

A Steinway stood at the front of the stage, ominous and unplayed during the opening work, Joerg Widmann’s Con Brio, rewritten since its first Proms performance seven years ago. It’s an unsettling piece featuring the grotesque enlargement of rhythmic and melodic features from Beethoven’s Seventh and Eighth Symphonies. At the same time, the players, using unconventional techniques, produce ‘natural’ sounds so that the orchestra appears to be breathing heavily, coughing, sneezing, whistling and shushing, while the timpanist strikes the empty tanks of the kettledrums like a child running a stick along railings. It was probably a little long, but it served as a tantalising precursor to the arrival of Martha Argerich to play Liszt’s First Piano Concerto. Barenboim chaperoned her in on his arm – they have been friends since they were born in Buenos Aires 75 years ago. Widmann’s nightmare rantings turned to refined thunder in Liszt’s opening orchestral salvo, which Argerich echoed on the Steinway with dark power and astonishing precision. Metrically exact trills flowed into arpeggios with the sweep of an arm. Her touch was magical as she reduced volume and temperature, the orchestra following, mesmerised. At the end, conductor and pianist played a duet as an encore, Schubert’s Rondo in A, Barenboim playing the right hand as Argerich had already shone. One hummed the pretty tune during the interval.

It was typically forthright of Barenboim to play orchestral excerpts by Liszt’s son-in-law Wagner in the second half: the performance of Wagner in Israel is still frowned on. Barenboim summoned a sumptuous string sound in the Tannhaeuser Overture and sinew-stiffening nobility in the trombones in the Dawn music from Goetterdaemmerung. The stabbing pairs of chords of Siegfried’s Funeral march were solemn and steel-edged. A tendency for slightly ragged entries was worst in the overture to Die Meistersinger but the tone quality compensated, the delicate shadings and the depth of feeling in the weighty bullion of sound.