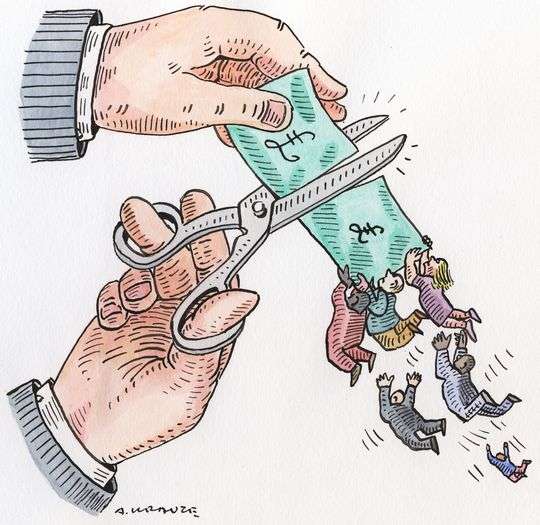 Three years ago, the Young Vic hosted a notoriously acrimonious event as the Arts Council came under fire for proposing some extremely unpopular cuts. It is likely that the Young Vic artistic director, David Lan, and his colleagues deliberately chose to hold this follow-up the week before we hear who will be affected by cuts to the arts budget that will amount to nearly 30% over four years and will see over 100 organisations losing their grants altogether. Instead of anger and despair, there was a desperate attempt to be positive and to look to a future when the economy may once again be on the move. Lan began by asking what will happen when the deficit has been paid off. ‘What will happen then? What’s our plan? We’re hear to start the conversation.’

We all know the arguments against the cuts. The point has been often made that for every pound spent by the government on the arts much more is handed back. Does this mean the cuts are ideological and will never be restored? The arts attract tourists to the country and raise the profile of Britain abroad. We are famous for the quality of the arts here and yet many speakers wondered why, when the campaign to save the forests drew passionate support, it is the practitioners who are currently fighting hardest and not those who go to the theatres, galleries, or concert halls. You only have to look at the online comments following any plea for the arts to realise that for all their popularity there are also many people who can’t understand how any case can be made for culture in the face of cuts to schools or our hospitals.

But if there was one theme that emerged, it was that it is not a question of arts or health, or arts or education. Rather, because of the outstanding outreach work being carried out by so many arts organisations, these days the arts, health and education and much more besides are inextricably intertwined. Is this something the current government understands when it condemns Labour for appointing well known architects to make sure that its new schools and hospitals were well designed, thus raising the spirits of the students and improving their work?

There were many moving testimonies as to how the arts had changed people’s lives. That is not to say that the arts are, in Richard Eyre’s telling phrase, ‘ethical medicine’. But if people are encouraged to participate in the arts themselves, then there is a strong possibility that they will go onto produce excellent work themselves or to appreciate excellence in others. The arts are about the struggle to bring meaning to our lives. Without a thriving cultural scene throughout the country, without the outreach work, without the libraries, without the humanities taking their proper place in schools, and without the humanities departments in universities being properly supported, then large sections of the community will never get the opportunity to appreciate what the arts can offer.

The conference was streamed online at www.whatnextarts.com where it will be available for viewing until the end of April.

You can also see on the same website, the contents of a letter to delivered to Downing Street and signed by the organisers as the conference was taking place.