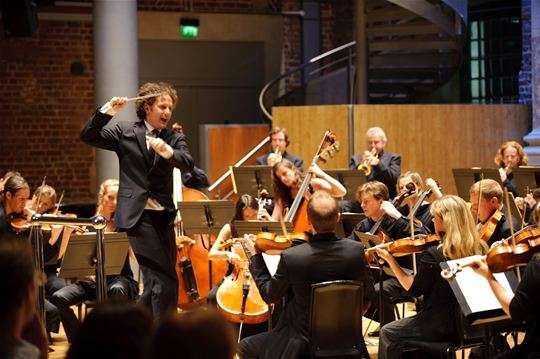 Is your journey really necessary?

Anyone expecting a straightforward recital of Schubert’s Winterreise from bright young British tenor Allan Clayton at Shoreditch Church will have been broadsided by this wacky ‘reimagining’ for orchestra and voice by Hans Zender, first heard at the QEH in 1993.

A bold choice for the hip Aurora Orchestra to perform at Spitalfields Winter Festival, it felt more like Winterreise on acid. And with orchestra members gliding round St Leonard’s Church clutching props, disco fairy lights twined round 18th-century pillars and a farewell snow-shower from the gallery onto the audience, it turned out to be an action-packed evening. The orchestration too was strange, breathtaking, cacophonous and occasionally brilliant. But what did it all add up to?

The hyperactive composer had pulled out of his toybox a kaleidoscope of instruments and effects, nodding to compositional styles from Surrealism to Spectralism. This musical circus was directed by Nicholas Collon with energy and an iron fist (the rhythms were devilishly difficult) and the virtuosic players had a chance to show off their versatility. Standout solos for trombone (Matthew Gee) and viola (Max Baillie) caught my ear, but everyone had their moments. An accordion drifted in and out of the score, suggesting both the poet’s original hurdy-gurdy and the cabarets and backstreets of ’30s Berlin. A guitar and harp, aided by pizzicato strings, created an icy, unsettling atmosphere hinting at a twisted folk-song.

Above it all rose Schubert’s peerless vocal line, sung clearly and steadfastly by Clayton. At times he was required to sing through a megaphone or to speak the lines while the orchestra romped around him, but he took it all in his stride.

Hans Zender has given the world his response to Schubert’s masterpiece, and it is clever and thought-provoking. But why gild a lily? I look forward to hearing Winterreise with Clayton’s fresh tenor and a single piano, with not a harmonica or wind machine in sight.