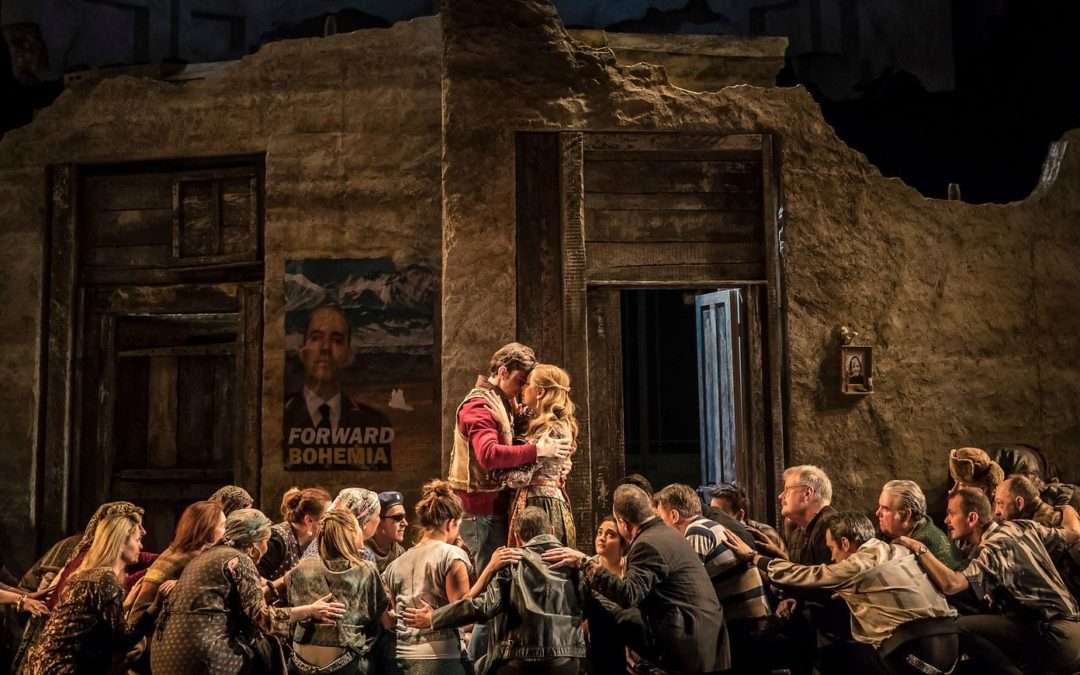 Between the conception of Ryan Wigglesworth’s first opera, The Winter’s Tale, and its premiere, two leading artists in other genres created their own versions of the Shakespeare play. Kenneth Branagh mounted a star-studded production at the Garrick Theatre and Christopher Wheeldon made a dance version for The Royal Ballet.

Wigglesworth’s opera, directed by actor Rory Kinnear, is neither as theatrically direct as the Branagh, nor as straightforwardly romantic as Wheeldon’s danced interpretation. It majors on orchestral drama, something for which this young composer/conductor/pianist is already well known. The music is skilfully and efficiently written to fill in gaps; Wigglesworth himself condensed the five-act play into around 20 pages of libretto. But the balance of Shakespeare’s text is sacrificed in the cutting, with big, violent dramatic moments taking precedence over the more nuanced emotional scenes. Kinnear provides clear direction, but he cannot alter Wigglesworth’s unvarying sound world. It is hard-edged, punctuated by jagged intervals in the brass, uneasy sliding strings and jittery percussion. Post-Berg, yes, but with ghosts of Britten’s swooping bassline from A Midsummer Night’s Dream, and Adès’s glacial high strings.

This idiom works well for Leontes’s military dictatorship in Sicily and his sudden outburst of jealousy in Act I, but less well for the bucolic bliss of Bohemia. In the programme notes Wigglesworth talks about the “previously claustrophobic musical language opening out” and a new lightness being introduced. But Perdita’s litany of spring flowers, the rosemary and the rue, lacked fragrance and tenderness, and her duets with Florizel are matter-of-fact rather than romantic.

Wigglesworth has assembled a stellar cast of British singers to present his first opera. His Leontes is the towering bass-baritone Iain Paterson, a compelling presence in both anger and sorrow; Sophie Bevan is a warm, composed Hermione, and Leigh Melrose as Polixenes provides a soldierly contrast to the out-of-control Leontes.  Susan Bickley as Paulina, Neil Davies and Timothy Robinson as Antigonus and Camillo, all make the most of their few moments. Newcomers Samantha Price (Perdita) and ENO Harewood Artist Anthony Gregory (Florizel) look and sound suitably sweet and gauche.

The chorus doubles as citizens and villagers, flooding on stage to protest against Hermione’s imprisonment and celebrate the spring feast. Unfortunately the dreariness of the contemporary costumes, designed by Moritz Junge, accentuates the awkwardness of their entrances and exits. Vicky Mortimer did a better job with the versatile, simple set comprising a single grey tower made up of concentric walls that slid open to reveal each new scene.

Few will be surprised by the happy ending in which the statute of Hermione is revealed to be the living queen, but Wigglesworth has added his own twist. As the clock chimes, Mamillius – Leontes’s dead son – steps out of the shadows and the curtain falls. It’s the nearest thing to magic in this rather prosaic Winter’s Tale.