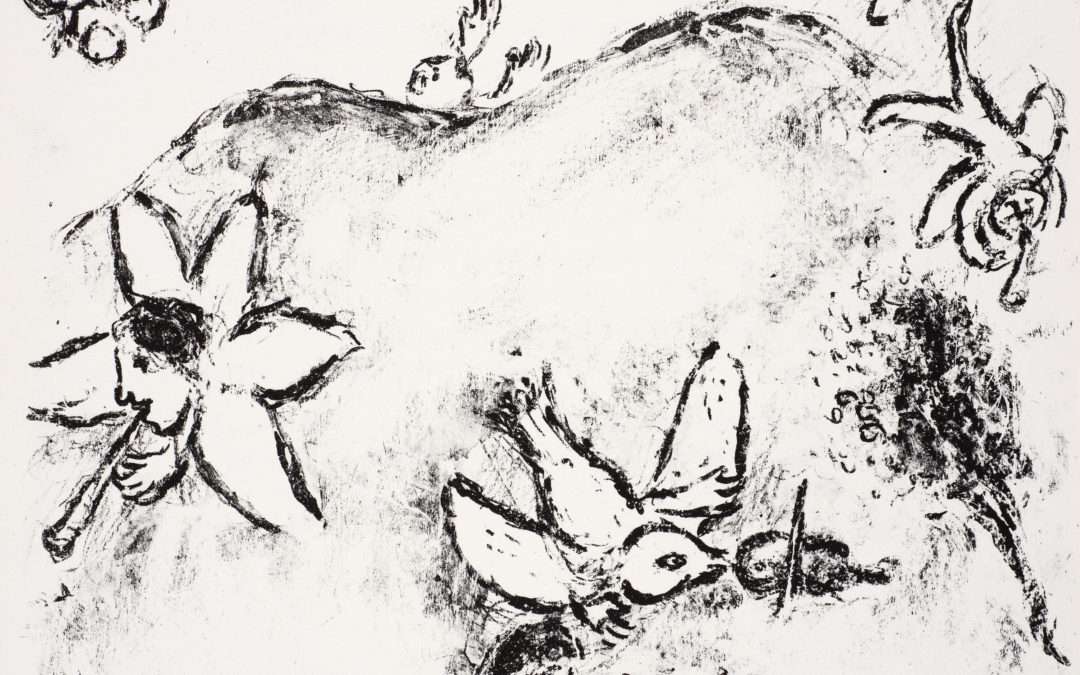 Chagall’s illustrations for Shakespeare’s The Tempest, by Clare Finn

Marc Chagall’s last major project has largely passed scholars by until it was studied more recently by Hanna Scolnicov, Professor emerita of Theatre Studies in the Faculty of Arts, Tel-Aviv University, and a Life Member of Clare Hall, Cambridge. Chagall provided almost fifty original lithographs for a folio of Shakespeare’s The Tempest, which was published in Monte Carlo by Editions André Sauret. It had hand-set text, in the new font, Romain du Roi, engraved by Philippe Grandjean, and Chagall’s lithographs were printed by the renounced print house of Fernand Mourlot in Paris. The total run was two hundred and fifty numbered copies, plus twenty copies for contributors (numbered I to XX). Number 122 has now entered the permanent collection of the Ben Uri Gallery, where it can currently be viewed in all its magical charm in an exhibition curated by Scolnicov. The gallery specialises in art connected to Jewish identity and migration and the current display of this Chagall folio fits perfectly with these themes.

The Shakespeare play is a tragicomedy dealing with betrayal, ill treatment, and magic. Prospero, the main protagonist, was once Duke of Milan, but his dukedom was usurped by his brother. Set adrift in a rotten boat with his baby daughter, Miranda, they arrived on a distant island inhabited only by the villainous Caliban, and, a spirit called Ariel. Prospero would rule the island using magic and his daughter grows up seeing no other human being. To revenge his enemies Prospero causes a storm to also wash them up on the same island. Love, of course, saves the day. Ferdinand, the son of Prospero’s brother and enemy, falls deeply in love with Miranda. He is tested to prove his fidelity and further plot twists and complications are resolved by the couple’s marriage, rifts are healed and Ariel is granted his freedom. It is a somewhat unlikely tale but Chagall uses it to draw parables with his own life.

With his combination of modernist art and Eastern European Jewish folk culture for many Chagall is the 20th century’s quintessential Jewish artist. Born in Belarus in 1887, he would be forced to migrate not once but twice in his life. Famine and politics first led to him leaving Russia in 1922 to settle in France. Then the German invasion and subsequent Occupation during World War II forced a second migration on him, this time to the United States.

Not all Chagall’s illustrations follow the text faithfully. Scolnicov points out that it is not clear how Chagall might have read the text. The folio is printed in English, which was not a language Chagall spoke, not well at any rate. Even his command of French was less than perfect and would have inhibited his full understanding of the play. She goes on to suggest he may have read it in Yiddish, into which the play was translated in 1937 and she also wonders if, years earlier, given Chagall’s work for the Jewish theatre when he was still in Russia, whether he could have seen a Yiddish performance by the travelling Vilner Trupe?

Chagall has been criticised for the unchanging iconography of his work and in the work under consideration here we do see all the old tropes; the family, the personal, the expression of love. It is not just Ariel we see flying through the air. But there is a charm, a magic, even if Ariel is somewhat tubby and his small wings must have worked overtime to lift him skywards. The setting, no longer an eastern Shtetl but an isle “full of noises, Sounds and sweet airs, that give delight and hurt not”.

Chagall’s plays his characters like acrobats across the page, not groups governed by the plot, their skywards projections recall the Russian theatre that sought to use the entire stage from stag right up to the proscenium arch. Chagall, like Prospero, conjures all the emotions Shakespeare wrote of, not by depicting Renaissance dress but with a delicacy of gesture, dynamic arrangement on the page, lines, textures and a very tangible rhythm adding playfulness.

Just as it was Chagall’s last major work The Tempest was also Shakespeare’s last completed play, a memory for them both.