X Marks the Spot in Xixón 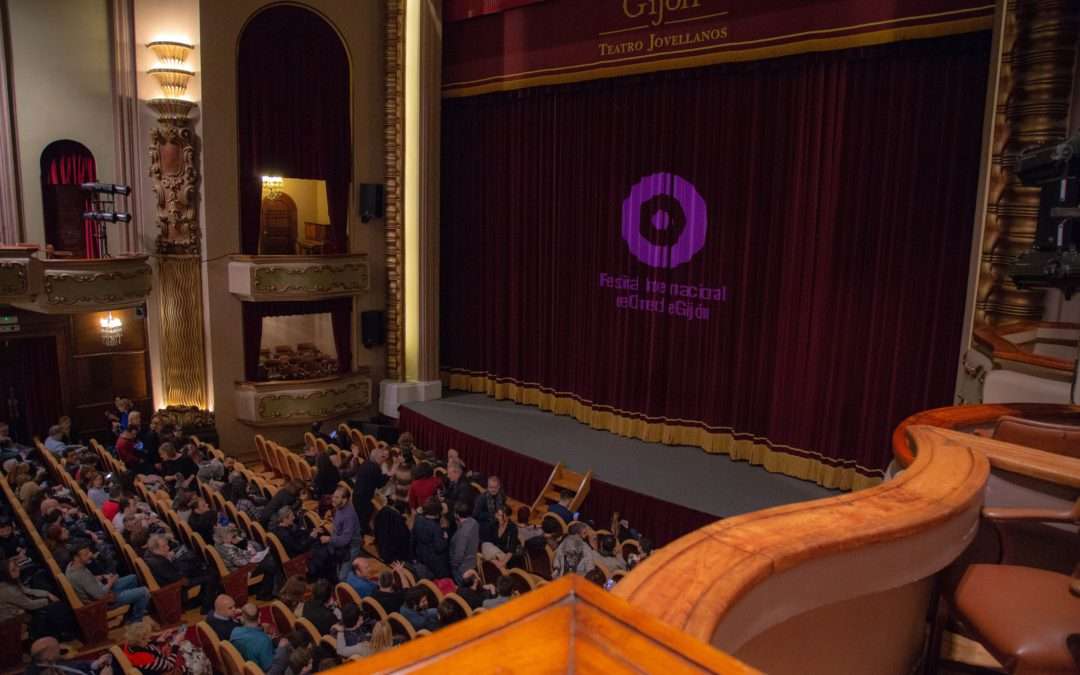 Gijón is a city of cinema, haunted by the ghosts of cinemas past. In 1963, when it first hosted the event now known as the Festival Internacional de Cine de Gijón (FICX for short)—for two decades a competitive showcase of children’s film and TV—there were more than 25 movie-houses in the central area alone, more than in any Spanish city of similar size. Even in 1986, when the festival’s focus switched from youth-oriented fare towards more general and adult material —though always retaining a large chunk of kiddie-friendly programming—the vast majority of these enterprises were still in business. All are now gone.

The last survivor was an unassuming, standard-issue, 90s-style miniplex: the Cines Centro in the San Agustin shopping centre. It closed its doors in 2015 and the space is now a branch of the Altafit gym chain. Since then the only spot to regularly show films in Gijón (largest settlement in the northern coastal region of Asturias, an area traditionally reliant on agriculture and fishing, then more recently on the coal and steel industries) has been the Yelmo multiplex in the suburb known as La Calzada, a 20-minute bus-ride from the centre. This isn’t by any means an unusual story in terms of middle-sized European cities, but most such settlements can’t boast a film festival with more than fifty editions to its name. The 57th renewal ran from November 15th to 23rd this year, with the €20,000 top prize going to Pedro Costa’s Locarno Golden Leopard winner Vitalina Varela.

Since the demise of Cines Centro, FICX—the X comes from the city’s name in the Asturian language, Xixón—has depended on the Yelmo: this year more than a third of all the festival’s sessions were held there. The opening and closing ceremonies and the most high-profile screenings did however take place in the city centre, in the opulent splendour of the 120-year-old Teatro Jovellanos. This grand venue is named after the city’s most famous son, enlightenment-era author/philosopher/statesman Gaspar Melchor de Jovellanos (1744-1811), and which upon its opening in 1899 succeeded the original Teatro Jovellanos around the corner. The latter is now an impressively stately public library: in its classical portico a plaque proudly commemorates the fact that in 1896 the first cinematographic exhibition in Asturias took place within its walls.

The “new” Jovellanos, mainly used for concerts and plays, is very much the jewel in Gijón’s cultural crown—and is maintained in tip-top condition by its owners, the generally left-leaning local council. I saw two films there during the latest FICX: Babyteeth, Australian newcomer Shannon Murphy’s drama about a terminally ill teenager—the muted-but-tragic climax had the desired emotional effect on many of the near-full-house audience, myself included—and the next night the starkly austere Vitalina Varela, a decidedly more slow-paced and challenging affair which sent several impatient patrons exit-ward long before the credits rolled.

While neither of these titles matched up to my great find of the week, Harmony Korine’s casually sublime, gloriously freewheeling Florida-set celebration of poetic hedonism, The Beach Bum (which I saw at the Yelmo just a couple of hours after arriving off the Madrid train) both Jovellanos screenings took place amid the kind of film-festival “vibe” which one can never imagine associating with any soulless multiplex. It doesn’t help that the Yelmo, part of a nationwide chain, occupies the upper floor of a neglected mini-mall, most of whose other units are currently vacant.

The FICX organisers, headed by well-regarded artistic director Alejandro Díaz Castaño, are all too aware that the current situation is far from ideal. While they do intend to continue using the Yelmo, the chiefs have their eyes on a new venue planned for a bland glass-box shopping centre, Los Fresnos, less than a kilometre from the Jovellanos. Díaz Castaño gave an interview in September where he expressed hopes that the projected nine-screen cinema might even be ready for the 58th FICX in November 2020. I had a look around the current Fresnos set-up during my visit to the festival, and formed the impression that such an aspiration is more than a touch optimistic.

But even if Los Fresnos does become a major FICX venue in 2020 or 2021, the screening-spaces will still be scattered too thinly across the city to generate the proper film-festival buzz—such is to be found in frenzied abundance along the coast in San Sebastian every September, during Spain’s #1 cinema-related event. More creative solutions need to be somehow found if the venerable Gijón equivalent—which this November attracted several high-profile auteur names such as Costa, Lisandro Alonso and Albert Serra—wants to maintain and increase its status as one of the country’s edgier and more adventurous festivals, and even perhaps carve a bigger niche on the crowded, competitive European scene.

This year meeting-rooms in the ornate Escuela de Comercio and the adjacent Antiguo Instituto, both of them a couple of minutes’ walk from Jovellanos, were used—along with a smaller number of screenings in the gigantic Laboral University (by some measures Spain’s largest building, some 4km from the centre) and a muncipal centre in another suburb, Pumarín. Walking from the Jovellanos to the Escuela and Instituto involves passing the venue which was formerly the festival’s main hub, the Teatro Arango.

This opened as a classic single-screen, 1100-seat palace of cinema in 1951 with a screening of Powell & Pressburger’s The Red Shoes, and operated for 48 years before closing down with Asterix & Obelix Vs Caesar on the penultimate day of 1999. The Arango later became a skin-care clinic and then this year suffered the ignominy of being converted—amid much dismay from those concerned with the city’s cultural and architectural heritage—into Gijón’s fifth Burger King.

The Arango was designed, like most of the city’s more striking edifices—most notably including the glorious modernist-rationalist concrete frontage of the 1940s bus-station, now in a sad state of crumbling disrepair—by father-and-son architects Manuel del Busto (1874-1948) and Juan Manuel Del Busto (1904-1967). A visit to “Burger King Arango” now provides a discombobulating, surreal, dispiriting experience for those aware of what went on here just a couple of decades ago. The listed building’s bold exterior is essentially intact, albeit now festooned with “classy” versions of the BK logos. Inside, elaborate chandeliers dangle from the high ceilings; the large, immaculately-painted balcony surveys not a cinema screen but a wide fast-food counter where (mainly) teenage customers pick up the orders placed on displays at the entrance.

Sufficient elements of the old space have been retained for the Arango to, in theory at least, revert to its original use at some future point. Its fellow city-centre movie-houses weren’t so lucky: the 1400-seat Hernan Cortes (1958-1994) a couple of blocks away is now a casino, the two former giants on the main pedestrian shopping thoroughfare Calle Corrida—the Maria Cristina (1943-1993) and the the thousand-seat Robledo (1917-1991)—boast few vestiges of their former purpose and are occupied by branches of Spanish clothing chains Oysho and Pull & Bear (both owned by Galicia-based multinational Inditex, best known for its Zara brand). The Roxy (aka Roma, 1933-1970) around the corner is now a BBVA bank.

The Goya, which as the Versailles was Gijón’s first purpose-built cinema back in 1910, was located at the end of an elegant short promenade that begins at the Jovellanos, and became known for sex and horror films in the 1970s. It closed in 1981 and post-demolition was replaced in 1987 by the Hotel Begoña which, ironically enough, is now used as one of FICX’s main festival hotels. Gijón’s principal shopping area is now just that, a shopping area: dozens of bars and restaurants are just a short walk away, but it’s easy to imagine a very different scene as patrons of the many cinemas criss-crossed the district. As Nick Nicolaou, the independent New York cinema-owner protagonist of Abel Ferrara’s documentary The Projectionist (my final FICX picture) remarks, “movie theatres add character to a neighbourhood,” and the sheer density of giant old-school cinemas during Gijón’s heyday is tantalising and poignant to consider.

The saddest story of all, however, concerns the Brisamar, which only operated from 1965 to 1981, in the Calle Romano Castro up on the windy Cimavilla headland which is the oldest and most spectacular district of the city. A grassy promontory is crowned by Basque sculptor Eduardo Childo’s minimalist-abstract concrete curve Eulogy To The Horizo. It’s an ideal spot for looking out over the Atlanic Ocean which brackets Asturias on its northern side, and then back over the roofs, apartment-blocks and and spires of the city to the distant snowy ridge of the Picos de Europa, which form the semi-autonomous principality’s southern border.

The Brisamar was Gijón’s arthouse, where locals could catch the likes of Last Tango in Paris, or the latest offerings by the likes of Bergman, Fellini and Fassbinder. Tucked away in an unremarkable cul-de-sac among the low-rise residential blocks which comprise the bulk of the likeably scruffy Cimavilla’s architecture, the Brisamar is now a small parking garage for the block of flats above. But one striking visual legacy of the cinema’s 16-year tenure remains: a large bas-relief panel dedicated to the inventors of cinema, the Lumière brothers. Its design is deliberately crude, almost Aztec-like in its starkness. Made of dark brown stone the colour of old wood or damp earth, it is dominated by a stylised representation of a film-projector; this appears to be of anachronistically medieval design, with myriad mysterious circles and the word LUMIERE printed dozens of times, as if on brickwork. I visited late one afternoon, the short street quiet apart from the cawing of seagulls overhead, the plaque easy to miss in its graffiti-strewn, unkempt, unlit vestibule. Dust obscured its rough surface: I impulsively wet a fingertip and rubbed it onto the dark brown stone. Old wood, damp earth… and faint but glowing speckles of gold.