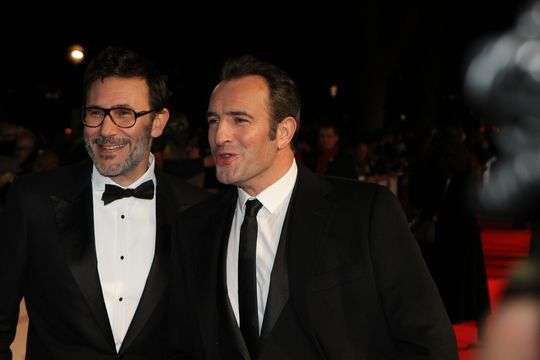 Jean Dujardin and Michel Hazanavicius collect the Film of the Year award from the Critics' Circle Film Section. They also won Actor and Director awards, respectively.

Silent film THE ARTIST took home three big awards at the 32nd London Film Critics’ Circle Awards: Film of the Year, Director of the Year and Actor of the Year. Director Michel Hazanavicius and actor Jean Dujardin were both at the event at BFI Southbank to collect their awards.
Asghar Farhadi’s Berlin winner A SEPARATION also took home three awards winning Foreign Language Film of the Year, Screenwriter of the Year for Asghar Farhadi and Supporting Actress of the Year for Sareh Bayat. All three awards were collected on behalf of the film by executive producer Negar Eskandarfar.
THE IRON LADY took home two awards, Meryl Streep tying the award for Actress of the Year and Olivia Colman winning The Moët & Chandon Award: British Actress of the Year for her performances in THE IRON LADY and TYRANNOSAUR, collecting the award in person. Anna Paquin was the other recipient of the Actress of the Year award for her performance in Kenneth Lonergan’s drama MARGARET.
Kenneth Branagh collected his Supporting Actor of the Year award for his turn as Laurence Olivier in MY WEEK WITH MARILYN. Michael Fassbender collected the British Actor of the Year award for his performances as Carl Jung in A DANGEROUS METHOD and as a sex addict in SHAME.
Director Lynne Ramsay was present to collect The Attenborough Award: British Film of the Year for WE NEED TO TALK ABOUT KEVIN. Asif Kapadia collected his Documentary of the Year award for SENNA. Andrew Haigh collected The Virgin Atlantic Award: Breakthrough British Film-maker for WEEKEND. Craig Roberts collected the Young British Performer of the Year for his lead role in SUBMARINE. Maria Djurkovic was present to receive The Sky 3D Award for Technical Achievement for her production design in TINKER TAILOR SOLDIER SPY.
Nicolas Roeg collected The Dilys Powell Award for Excellence in Film from his dear friend and collaborator Donald Sutherland. Also present on the red carpet this evening were Carey Mulligan, Jeremy Irvine, Edith Bowman, Barry Norman, Yasmin Paige, John Boyega, Michael Smiley, Carol Morley, Zawe Ashton, Peter Straughan, Luc Roeg and Robyn Slovo.
Chairman of the Critics’ Circle Film Section, Jason Solomons, commented: “Judging from the quality of films and performances honoured tonight, it is clear that the critics – who see every film, not just those with ‘awards campaigns’ behind them – have an increasingly influential voice in awards races. Our wide-range of viewing has thrown up great surprises and championed small films, shining a light on new, exciting, challenging and thrilling work from around the world of film. Without the enthusiasm of critics, terrific films such as ‘The Artist’, ‘A Separation’ and ‘Margaret’ and amazing performances such as those by Olivia Colman and Michael Fassbender would not be receiving the wider, global attention occasions such as this can inspire. It was also a thrill to see director Nic Roeg honoured and witness the huge respect and admiration from film-makers and critics for this artist’s incredible, still-groundbreaking body of work.”
This year’s edition of the Film Critics’ Circle Awards was again presented by chairman Jason Solomons. It was held for the second time at BFI Southbank, in aid of their charity partner, the BFI Archive, to help with the preservation and restoration of British film, in particular Hitchcock’s nine silent features, as part of the BFI’s landmark ‘Rescue the Hitchcock 9 Campaign’. The Awards were presented in partnership with Virgin Atlantic.
The winners in full:
FILM OF THE YEAR
The Artist (Entertainment)
TOP 10 FILMS
1. The Artist
2. A Separation
3. Drive
4. Tinker Tailor Soldier Spy
5. The Tree of Life
6. We Need to Talk About Kevin
7. Melancholia
8. Shame
9. Margaret
10. The Descendants
The Attenborough Award:
BRITISH FILM OF THE YEAR
We Need to Talk About Kevin (Artificial Eye)
FOREIGN-LANGUAGE FILM OF THE YEAR
A Separation (Artificial Eye)
DOCUMENTARY OF THE YEAR
Senna (Universal)
DIRECTOR OF THE YEAR
Michel Hazanavicius – The Artist (Entertainment)
SCREENWRITER OF THE YEAR
Asghar Farhadi – A Separation (Artificial Eye)
The Virgin Atlantic Award:
BREAKTHROUGH BRITISH FILM-MAKER
Andrew Haigh – Weekend (Peccadillo)
ACTOR OF THE YEAR
Jean Dujardin – The Artist (Entertainment)
ACTRESS OF THE YEAR (TIE)
Anna Paquin – Margaret (Fox) and
Meryl Streep – The Iron Lady (Fox/Pathé)
SUPPORTING ACTOR OF THE YEAR
Kenneth Branagh – My Week With Marilyn (Entertainment)
SUPPORTING ACTRESS OF THE YEAR
Sareh Bayat – A Separation (Artificial Eye)
BRITISH ACTOR OF THE YEAR
Michael Fassbender – A Dangerous Method (Lionsgate), Shame (Momentum)
The Moët & Chandon Award:
BRITISH ACTRESS OF THE YEAR
Olivia Colman – The Iron Lady (Fox/Pathé), Tyrannosaur (StudioCanal)
YOUNG BRITISH PERFORMER OF THE YEAR
Craig Roberts – Submarine (StudioCanal)
The Sky 3D Award:
TECHNICAL ACHIEVEMENT
Maria Djurkovic, production design – Tinker Tailor Soldier Spy (StudioCanal)
The Dilys Powell Award:
EXCELLENCE IN FILM
Nicolas Roeg
For the British categories, films, film-makers, actors and actresses from both the UK and Ireland are eligible.
The Circle policy is set out by the chairman of the Awards Committee, Jason Solomons, in the introduction to the Film section page.