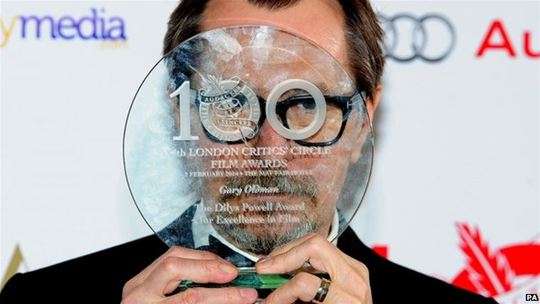 Gary Oldman with the Dilys Powell Award for Excellence in Film

The Critics’ Circle Film Section held its annual awards on Sunday night at the May Fair Hotel, with sponsorship by The May Fair, Beluga, Novikov, Cameo, Audi, Innerplace and Publicity Media. The big winner at the ceremony was 12 Years a Slave, which picked up awards for Film of the Year, Actor Chiwetel Ejiofor and Supporting Actress Lupita Nyong’o. Steve McQueen was on hand to collect the awards. The Selfish Giant won two awards – British Film and Young British Performer for Conner Chapman – giving filmmakers Clio Barnard and Tracy O’Riordan and actors Chapman, Shaun Thomas and Lorraine Ashbourne a chance to celebrate on stage.

Barkhad Abdi delighted the crowd accepting the Supporting Actor award, while Jon S Baird took to the stage twice, first to collect the Breakthrough British Filmmaker for Filth and then as a stand-in for British Actor James McEvoy. Steve Coogan accepted Judi Dench’s award for British Actress. And Andy Serkis read out a hilarious thank you from Cate Blanchett, who won Actress. Other winners present included Andre Singer, producer of Documentary of the Year The Act of Killing, and Tim Webber, winner of the Technical Achievement Award for Gravity‘s visual effects. There was also an appearance by Ulysses the cat to accept Joel & Ethan Coen’s Screenwriter award.

The highlight of the evening was the presentation of the Dilys Powell Award for Excellence in Film to Gary Oldman. John Hurt was on hand to deliver a heartfelt introduction, and Oldman had the crowd in the palm of his hand with a beautiful thank you speech.

The ceremony opened on a note of solemnity with the announcement of Philip Seymour Hoffman’s death, which was confirmed just as the event was starting. Hoffman won Supporting Actor at last year’s CC Film Awards for his role in The Master.

Film of the Year

Foreign-language Film of the Year

Blue Is the Warmest Colour

Documentary of the Year

The Act of Killing

British Film of the Year

Director of the Year

Screenwriter of the Year

Actor of the Year

Actress of the Year

Supporting Actor of the Year

Supporting Actress of the Year

British Actor of the Year

British Actress of the Year

Young British Performer of the Year

The Act of Killing (Dogwoof) – Documentary