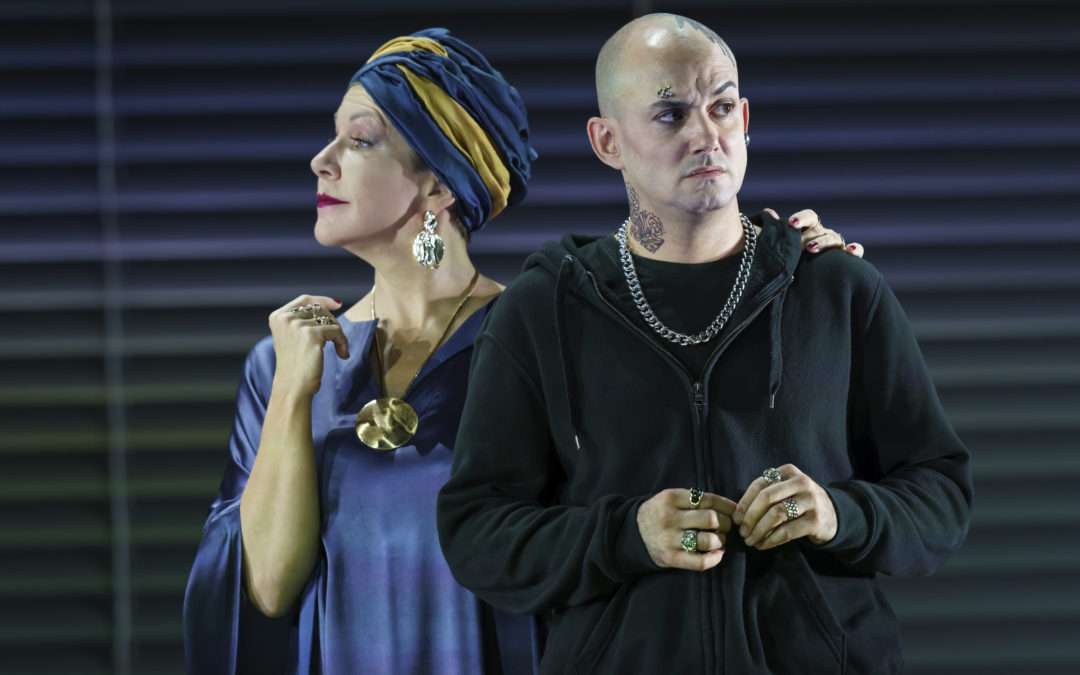 Among my regrets is that I am old enough to have seen and heard Maria Callas perform at Covent Garden, but young enough at the time to feel I could not afford the tickets. It goes some way to make up for this lapse that I have seen Joyce DiDonato several times at the ROH, including what I expect will be remembered as an historic performance of the title role in Handel’s Agrippina in the ROH premiere of Barry Kosky’s production. DiDonato is not only technically assured, with pitch-perfect coloratura, astonishing breath control, and complete control of dynamics, but she is also a superlative actress. When the libretto calls for her to be sexy, to seduce not only her henchmen, Pallante and Narciso, the servant, Lesbo, her returned husband, Claudio and even her son, Nerone, you can almost feel the pheromones circulating in the opera house.

The most notable thing about Kosky’s production, indeed, is that every member of this ensemble can act. When the two women, three countertenors and three basses are on the stage, in Rebecca Ringst’s flexible set that looks a bit like a DIY storage unit on the outskirts of West London, they behave as an ensemble. Except for librettist Cardinal Grimani’s dramatic soliloquy arias, every one sings to someone (only rarely, but significantly, to the audience, in House of Cards fashion), and whoever is on the receiving end has been carefully directed by Kosky to listen. There’s a bit too much stage business, a little too much “they were only playing leapfrog”, and the occasional over-exaggerated gesture; but the comedy is there, in the words and the music, and it works, especially in the scene when Lucy Crowe’s superb Poppea has to hide her three rival lovers, Ottone, Nerone and Claudio, from each other in the same room.

It seems it’s been 244 years between the first-run of Agrippina in Venice and the “second-run” at Halle, Handel’s birthplace, in 1943. This is a demanding work, for the audience as well as the singers. The timings are given as 100 minutes of Act 1 and Act 2, part 1, then an interval of 30 minutes, and 85 minutes for the rest. That’s more than three hours in your seat, and nearly as long on stage or in the wings for some of the performers. We expect to sit, attention riveted, watching and listening, completely focused on what’s happening (mostly) on the stage. We thus receive the piece in a different way from Handel’s 18th-century audiences, who no doubt came and went as they pleased or needed; whereas the audience in London or Munich has fixed times before the start and during the interval to relieve or refresh themselves.

I raise these irrelevant-to-the-opera-itself topics, the more to praise the performers, and the director who has welded them into such a firm ensemble. You know from the first chords played by the relatively small Orchestra of the Age of Enlightenment, conducted by Maxim Emelyanychev (who is a skinny as the tie he wore at the first performance), that you can have confidence that everything musical that is to come will be precise, elegant, but as tender and beautiful as Handel’s passages between DiDonato and the solo oboe. Apart from a little unsuitable choreography for Lucy Crowe (a jolly little dance when she’s being neurotic, feeling murderous, and taking it out on Ottone), she shows herself to be just as much the diva as Agrippina. How she manages her breathing is a mystery, especially when she has repeatedly to climb the long stairway and circle the set a few times before tossing out “these bravura arias… awash with coloratura, sequences and energetic dotted rhythms” (says Panja Mucke in her fine programme note). Lucy Crowe’s is a virtuoso display, as is that of Iestyn Davies (Ottone). Davies is a countertenor with a true trill – thrilling to hear. His reflective arias are ravishingly beautiful, and his post-athletic-feat breath control as mind-boggling as Crowe’s, equalling that of Franco Fagioli as Nerone, the second countertenor in this crew. (The third is the minor role of Narciso, sung by Eric Jurenas). All the men except Claudio in this staging are as camp as Christmas – though I’m not clear why Kosky has decided on this reading of the libretto, it does make the comedy even funnier – although some of the mannerisms could be damped down to the profit of the plot.

Nerone has the hots for Poppea and, clearly, also for his mother, Agrippina, a perfectly respectable reading of the Freudian Oedipal situation. His costume by Klaus Bruns, however, separates him from the rest of the ensemble, as Nerone here is an effeminate but straight leather-boy, with tattooed head, steel necklace, skin-tight trousers and body-piercings galore. Fagioli has some of the best tunes, and sings one of his arias from the foetal position, something I’ve not seen before.

Claudio (the terrific bass, Gianluca Buratto) electrifies the house when he appears in military garb as the Caesar rescued from the sea, but spends much of part two with his trousers round his ankles. Still he’s the sole butch character on the stage – until Agrippina arrives in the final act in dinner-jacket drag.

“At the close,” says Kosky in his ROH programme interview, “where dances were played in Handel’s time, we play a slow piece from his oratorio L’Allegro, il Penseroso ed il Moderato.” The moral of the story would be clear, except that Kosky and Emelyanychev have decided not to end with bang, but with the mysterious sigh of this orchestral piece, in which Agrippina is not murdered on her son’s orders, but sits alone as the shutters descend and the lights go out.