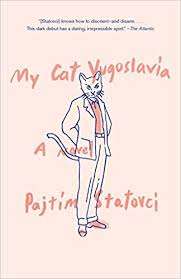 Review by Lucy Popescu, Secretary of the Books Section

Translated from the Finnish by David Hackston

Pajtim Statovci’s remarkable debut novel is a poignant examination of the migrant-refugee experience spanning two generations. In 1980, Emine, a young Kosovan woman, is married off to Bajram a handsome, educated and wealthy man. Too late she realizes he is controlling and abusive. After her wedding, Emine accepts that her choices are limited and resigns herself to serving her husband and bringing up their children. Neither bring her joy and their home situation worsens when war breaks out and the family is forced to flee to Finland.

Running parallel to Emine’s story is that of her adult son, Bekim, a gay man, looking for love and direction. Mother and son are alienated by choices outside their control and struggle to assimilate in their adopted country. Statovci writes perceptively of the exile’s overwhelming desire to fit in and be accepted. Bekim’s bitterness and sense of worthlessness are directly inherited from his father, who tells him that “Immigrants have to grow a thick skin if they want to do something more than wait hand and foot on the Finns . . . one day you’ll see that if you try and become their equal, they’ll despise you all the more . . . never try to be better than them”.

Bekim distances himself from both mother and father, moving to his own apartment as soon as he starts university, but even there he remains friendless. He is ashamed of his parents and uncomfortable with his homosexuality. As a child he had been tormented by nightmares about snakes. Now he buys a boa constrictor and keeps it as a pet. But it is not until he meets a talking cat in a gay bar that he is jolted out of his apathy. The cat moves in with Bekim and they enjoy a brief happiness together. It is some measure of Statovci’s skill that this magical realist element is integrated so seamlessly.

When they all fall out, after his snake almost murders the cat, Bekim sets out on a journey to discover his roots and his parents’ past. Emine, meanwhile, finds the strength to leave her loveless marriage and begins to fend for herself. Enchanting and disturbing, My Cat Yugoslavia serves as a stark reminder of the reverberating effects of dislocation. Despite their different levels of integration, mother and son remain outsiders who, Statovci suggests, risk becoming alienated from themselves.