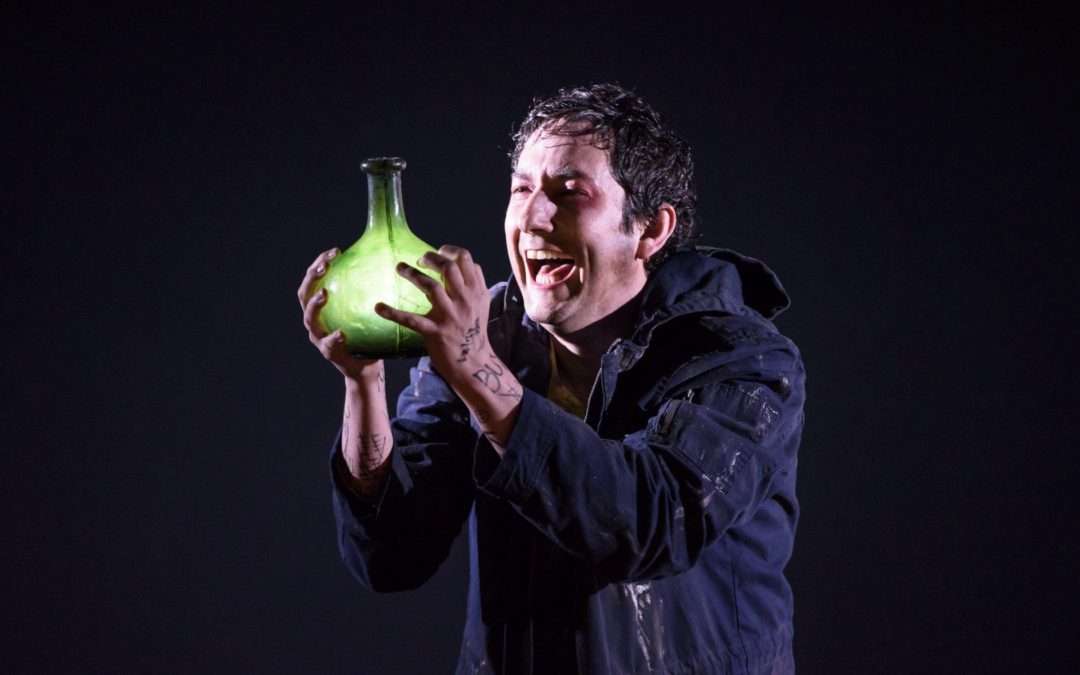 Careful what you wish for

Some malign force must have been at work on the second night of The Devil Inside when conductor Michael Rafferty stopped the performance ten minutes into the second scene because all the lights in the pit had gone out. Perhaps the evil spirit at the heart of this opera – a flickering absinthe-green light in a glass globe – was making his presence felt.

Based on The Bottle Imp, a short story by Robert Louis Stevenson, The Devil Inside has a propulsive plot with pithy dialogue by Scottish crime writer Louise Welsh. She has teamed up once again with composer Stuart MacRae – it’s their third opera together – for this commission by Scottish Opera and Music Theatre Wales. Welsh’s dramatic instinct and MacRae’s inventive score have made a modern morality tale out of Stevenson’s familiar devices: like Aladdin’s Genie and Faust’s Devil, the imp offers material benefits, though with important small-print. The setting picks up on today’s concerns – bankers, greed, the rise of the Me-generation, addiction to drugs, money and power. The flexible set is an uncluttered black and white design by Samal Blak with inventive lighting and projections by Ace McCarron.

The opera opens on a darkened stage where two backpackers, Richard and James, are struggling through a storm. They spy lights ahead and a mansion appears on the mountainside; here they meet an old man who tells them they can have anything their hearts desire if they buy his magic bottle. The catch is that the owner must sell it before he dies or his soul will burn in Hell – and he must sell for less than he paid. Richard talks James into buying the bottle. Over three acts the two friends sell the bottle back and forth, and find themselves blighted by addiction (Richard) and childlessness (James and his wife Catherine). By the end even Catherine is drawn into the madness when she decides to buy the bottle to wish for a baby, and there’s a gruesome twist before the final curtain.

Director Matthew Richardson keeps up the tension the as the bottle passes from hand to hand. But turning Stevenson’s pacy story into a three-act opera results in some longueurs, especially in the scenes between James and Catherine. Ben McAteer as James has a pleasing combination of warmth and solidity to his baritone, Rachel Kelly brings a bright, nervy mezzo-soprano to the role of Catherine and Steven Page is the forceful Old Man and a Vagrant. But it’s the performance of versatile tenor Nicholas Sharratt that really impresses. He develops the character of Richard from callow young backpacker through a slick banker to a wasted addict twitching with desperation.

MacRae’s colourful score for 14-piece ensemble is full of fruity brass, growling woodwind and sinewy strings, and an armoury of effects including glacial harp, vibraphone, triangle and for the Bottle Imp’s malevolent siren song, a reedy harmonica, a bagpipe chanter and a balloon. The angular vocal lines don’t always measure up to the colour and lyricism of the orchestral writing.

The Devil Inside is touring England and Wales from to 18 April, and Canada on 12 and 13 March 2016. For a list of venues see thedevilinside.musictheatrewales.org.uk