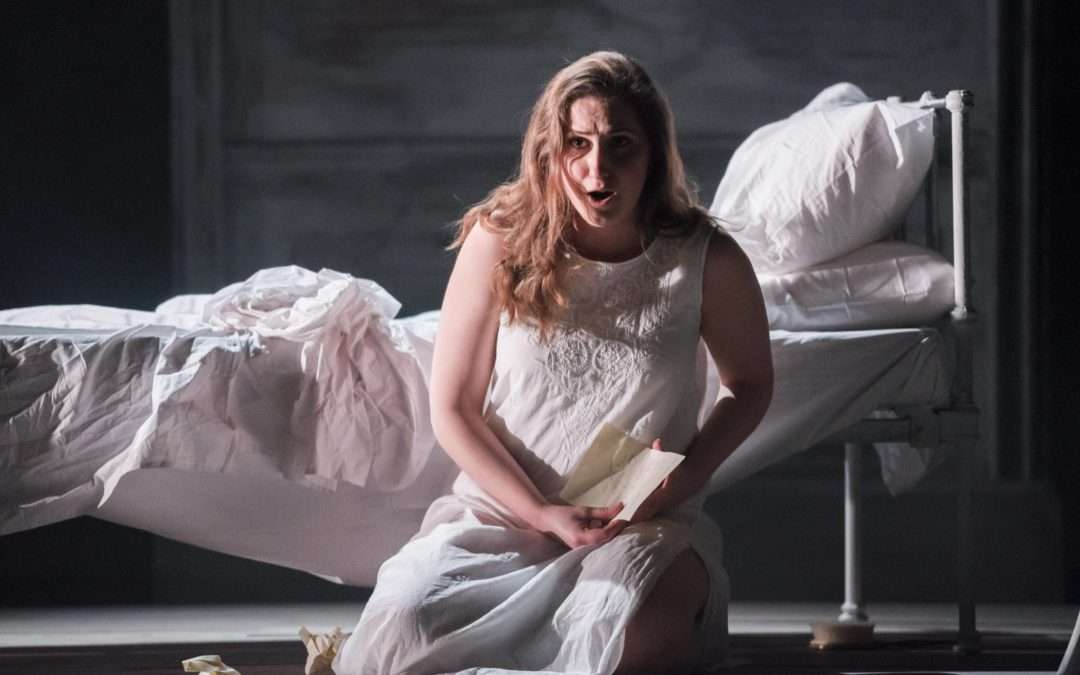 The second full-scale production by Mid Wales Opera under Richard Studer and Jonathan Lyness’s leadership is Eugene Onegin, and it’s a shrewd choice. How shrewd? Well, as Tchaikovsky himself put it: “Those whose first requirement of an opera is theatrical action will be dissatisfied. However, those who are capable of searching within an opera for the musical reproduction of ordinary, simple, universal feelings far removed from high theatricality can, I hope, find ultimate satisfaction in my opera.” Lavish production concepts and all-star casts can actually work against these seven “lyrical scenes”, as anyone who saw Kaspar Holten’s 2013 production at the Royal Opera will have been painfully aware. Lyness’s touring staging actually seems to expand the opera’s scope. I don’t think I’ve experienced an Onegin that felt quite this wide open, its characters so hopelessly alone.

But turning practical limitations into artistic strengths (and budget aside, creating a production that will fit into nine different venues from Bangor to Milford Haven presents its own challenges) is what the rejuvenated MWO does. With an orchestra of just 12 musicians, player fatigue alone probably makes two intervals necessary. The sets, too (Studer is designer as well as director) provide just enough to create an atmosphere: three doorways, an expanse of wooden floor, a couple of chandeliers for St Petersburg and judicious and effective use of mist and lighting (by Dan Saggars) to create a sepia-tinged atmosphere suggestive of distance and memory. The costumes belong to Pushkin’s 1820s, and are none the worse for it. MWO’s mission, after all, is to take live opera to places that don’t usually experience it, and Regency dramas are so familiar from TV and cinema that in keeping the action where Tchaikovsky set it, you create an instant connection to the opera’s world. Why complicate matters?

That’s Tchaikovsky’s and the performers’ job – and while Studer’s sets create a lot of bare, lonely space on stage, Lyness’s conducting (he made the reduction himself) makes the most of Onegin’s potential as chamber music: with long, loving phrases that he allows to settle into their own space, and moulds carefully to the singers’ lines. The accompaniment to Lensky’s final aria was (fittingly enough, given the character and the period) like hearing a Schubert lied. Studer deploys the whole company effectively. The Larin serfs in Act One and Tatyana’s nameday guests in Act Two are all present and singing with considerable gusto (unlike some touring productions, the choruses are not cut). In Act Three, they sketch in details of a ball that, it’s implied, is happening a couple of rooms away – true to the notion that Tatyana and Eugene have both marginalised themselves in the central drama of their own life.

Though given the fragility of Elizabeth Karani’s Tatyana, that does feel like the only viable outcome. Karani is a Tatyana on the edge, singing with a bright, tremulous soprano that verges on the brittle – her Letter Scene is so fervent and so fraught that by the time she confronts Onegin you genuinely believe that this is a girl who’s been up all night. You can sense the relief behind her newfound assurance in Act Three – though who wouldn’t feel reassured around Sion Goronwy’s towering, chocolate-voiced bear of a Prince Gremin? In the meantime she makes Onegin’s brush-off seem almost reasonable, and George von Bergen played the role with a brusque, ramrod-straight elegance that gave very little away emotionally – at least until the final scene, where the sight of him on his knees, and the sound of that firm, controlled baritone breaking into a roar of pain, was all the more of a jolt.

Certainly, he made an implacable counterpart to Robyn Lyn Evans’s boyish, ardent Lensky – for once, a student poet who sounded his age, albeit with a beautifully controlled way of pointing a phrase in the Act Two duel scene. As Olga, Ailsa Mainwaring was as obliviously flirtatious as you’d hope: a force of nature with a blossoming, sensuous mezzo to match. Stephanie Windsor-Lewis was a shrewd and unusually youthful Larina, Maria Jagusz’s Filipyevna was richly compassionate, and throughout the company – in Jonathan Cooke’s honey-toned Monsieur Triquet, Matthew Buswell’s Captain (there’s a voice I’d like to hear again) and Nicholas Morton’s Zaretsky – there was evidence of Studer and Lyness’s skill at casting, and at building an ensemble.

In fact, if any one thing explains why MWO’s rebirth has been so successful – and why this is one of the most vital and important achievements in current British opera – it’s surely that combination of a confident and resourceful artistic leadership plus a company in which every member carries their weight. That includes the heroic and often extremely sensitive players of Ensemble Cymru, whose small numbers put the first violin and the horn player, in particular, under audible pressure. Of course, that’s no fault of their own, or of Lyness’s conducting, or indeed of his highly imaginative reduced orchestration (I loved the harp glissandos in the Polonaise). You just have to hope that in some glass-sided office in Cardiff or London, the relevant box-tickers have clocked the quality of what Mid Wales Opera is doing, and will see to it that they get the resources they need to take their work to the next level – ideally sooner rather than later.