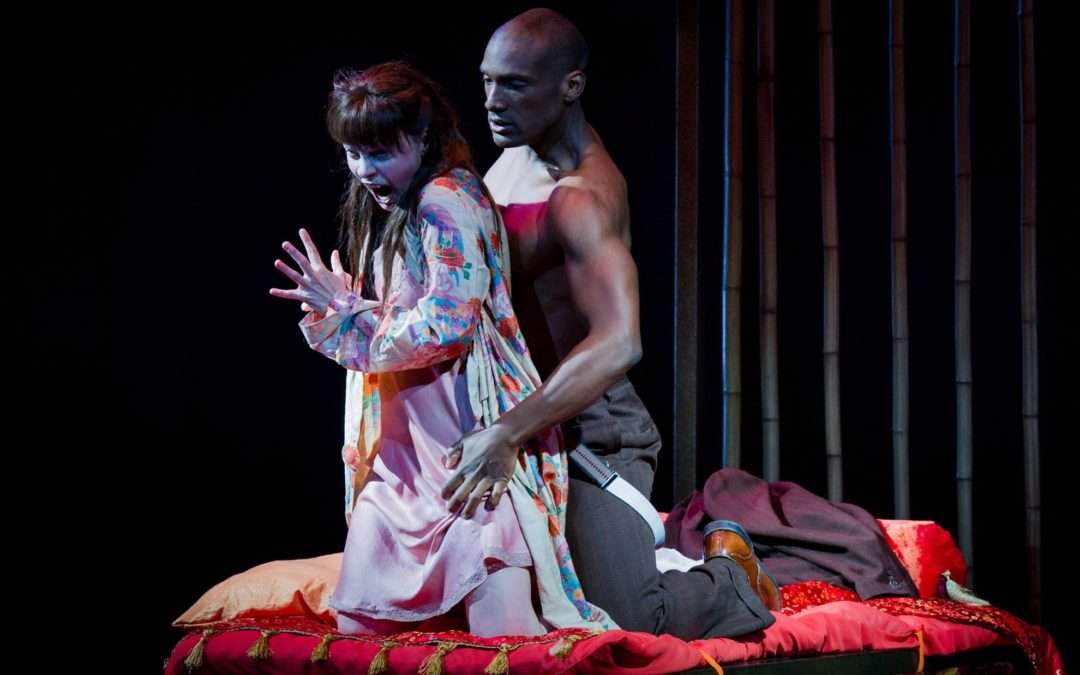 Imagine Madama Butterfly without love, without hope, set in a brothel, with a heroine who dies not by the sword but in a sewer. That’s Mascagni’s 1898 opera Iris, back on a London stage for the first time in nearly 20 years in a new production at Opera Holland Park. That Iris came first is no defence against the inevitable comparison, so thoroughly has Puccini’s work obliterated the memory of its predecessor. Is Mascagni’s opera as good as Butterfly? Technically, almost certainly not. But what it does offer is a bleak and bracing journey through the same thematic landscape, looking East but with none of Puccini’s euphemising, cherry-blossom softness.

Which is unexpected, unfolding as it does in a score that’s all gauzy textures and fragrant, heady harmonies. Avoiding any too-obvious musical pastiche, Mascagni’s Japan is a more subtle construction, with gongs and harp adding their delicate shading to a conventional orchestra. Indulgent, and occasionally meandering, the music is redeemed by its beauty. If the piece is to come off then we have to be in thrall to its loveliness, to lose – however briefly – our sense of moral outrage and surrender to its charms. Only then can we realise the true horror of Mascagni’s unblinking plot.

Olivia Fuchs’s new production is a careful negotiation between horror and beauty, between Orient and Occident. Designer Soutra Gilmour gives us Japan-lite, the setting suggested rather than stated in a sequence of bamboo structures, whose fragility can’t quite conceal that they are barred cages, the inevitable paper lanterns, and some oversized waterlilies. It’s attractive without being precious, a smooth visual surface Fuchs sets rippling with her action.

A plot that mocks even the possibility of romance sees young Iris kidnapped from her village by lusty Osaka and unscrupulous brothel-keeper Kyoto. When she fails to submit to her new life, she is stripped nearly naked and displayed in the brothel window. Hearing of her disgrace, her blind father arrives to hurl mud and insults at her, so shaming her that she flings herself into a sewer and is carried away to her death.

Fuchs doesn’t shy away from the nastier episodes, balancing pretty fishing-village sequences with some fairly disturbing sexual violence. These are made all the more disquieting by soprano Anne Sophie Duprels, whose child-woman Iris lives so completely in her small frame. There’s innocence here, but also wilful ignorance, and Duprels finds both, playing off her physical youthfulness against a voice that has all the lived-colours of a mature woman. It’s this friction that gives her performances its charge, surviving even an unusually abstract Act 3.

It’s Noah Stewart’s Osaka, however, who gets Mascagni’s best vocal writing – the glorious Hymn to the Sun and the serenade ‘Apri la tua finestra’. His is a voice still showing its technical working, though if the results currently seem a little hard-won, especially at the top of this role’s relentlessly high range, there’s no denying the quality of the voice itself, nor Stewart’s musicality. Mikhail Svetlov is an anchoring vocal presence as Il Cieco, balancing the rather less rooted performance of James Cleverton’s Kyoto.

Stuart Stratford conducts a sympathetic performance from the City of London Sinfonia, though there were more than a few smudges in the texture on opening night. It’s the chorus who really shine, beginning and ending the drama with their glorious hymn – a gilded musical frame for a grubby work, just as Mascagni intended.