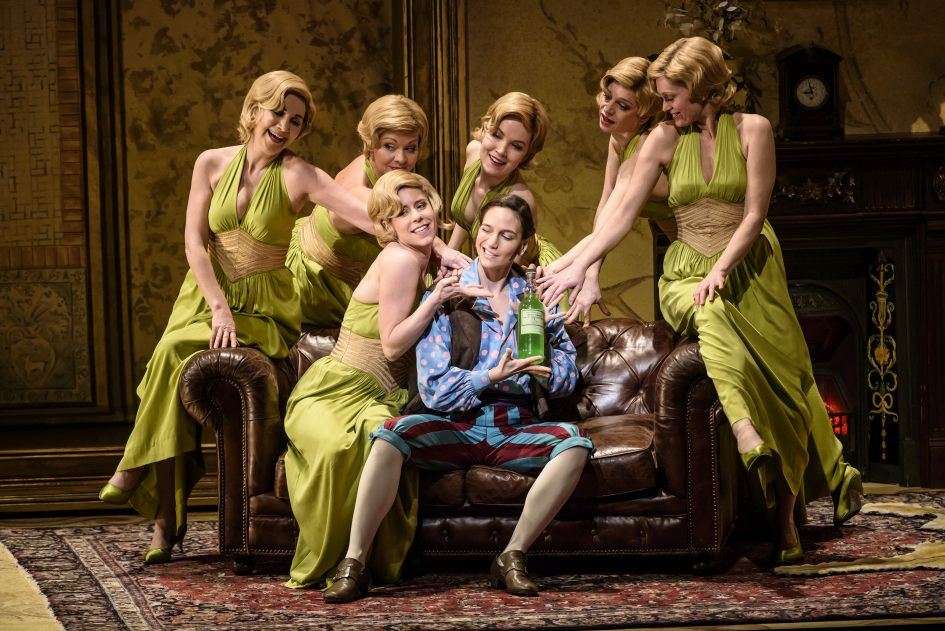 A wholesale rewrite – a brace of new characters, a bucket-load of new dialogue – and more pantomime than the back end of a horse makes Chabrier’s L’étoile more Agincourt than entente cordiale in Covent Garden’s first-ever production.

How you react to Mariame Clément’s riotous jumble-sale of cultural references – buy one get five free – will probably depend on your opinion of Chabrier’s score. Those with Debussy, Stravinsky and Ravel in the “oui” camp will detest the relentless undermining of every moment of delicacy: parody curdled into panto. But the “nons” for whom L’Etoile is a just a bit of French frippery will no doubt find themselves tickled in all the right places.

Following the amorous and political machinations of King Ouf I (impalings, astrologers, pedlars and princesses-in-disguise), Chabrier’s plot is all but incomprehensible. Rather than surrender to the fantasy, Clément makes a feature of its difficulties, creating two new speaking roles – Dupont (Jean-Luc Vincent) and Smith (Chris Addison) – to guide the perplexed audience. Their comic interventions frame the action (quite literally: the entire show plays out inside a picture-frame proscenium) with commentary that shamelessly hurls every national stereotype at the canvas.

In a smaller space, perhaps Wexford or Opera Holland Park, the spoken by-play wouldn’t have to shout to make itself heard. As it is, Chabrier’s glittering operatic star gets swallowed up in the black hole of the Royal Opera House, losing brilliance with every metre it has to travel. Which certainly isn’t for lacking of trying on the part of Clément or designer Julia Hansen: from Millais to Monty Python, Shahnameh to Toulouse-Lautrec, it’s all here in an anachronistic romp of visual infidelities. When pedlar Lazuli (Kate Lindsey) and her beloved Laoula (Héléne Guilmette) flee, their getaway motor-boat appears cresting Hokusai’s waves, while the chorus brings every illuminated Oriental fairytale to life.

Hindering matters further is Mark Elder’s direction. The lighter the comedy the tighter the ensemble must be, the more lightfooted the melodies the more precise their tread. Instead, despite the conductor’s professed love of the score, we get scrappy orchestral textures, haphazard instrumental interjections and tense stand-offs between cast and pit. Mathieu Guilhaumon’s choreography is pure Gilbert et Sullivan, nowhere near tight enough to carry its visual punchlines.

It’s a shame, because the cast promises much more. Kate Lindsey makes an impetuous and charismatic Lazuli, her mezzo gloriously even from top to bottom, whether in the swift patter of ‘Je suis Lazuli’ or the sudden intimacy of ‘Ô petite étoile!’. She’s partnered beautifully by Guilmette – a statelier, more subdued figure than all around, injecting some welcome stillness into proceedings. Christophe Mortagne’s Ouf is a gurning, vowel-contorting delight, his voice dipped in acid and his tongue thick with Chartreuse-charm. Playing the straight(ish) man, Simon Bailey’s Sirocco anchors ensembles with generous resonance, and Julie Boulianne makes much of Aloès.

Loud and brash where it should be conspiratorial and witty, this Etoile’s glow is decidedly wan – an operetta whose elevation to this opera house does it no favours. French understatement meets English comic excess here with tragic results: nul points.