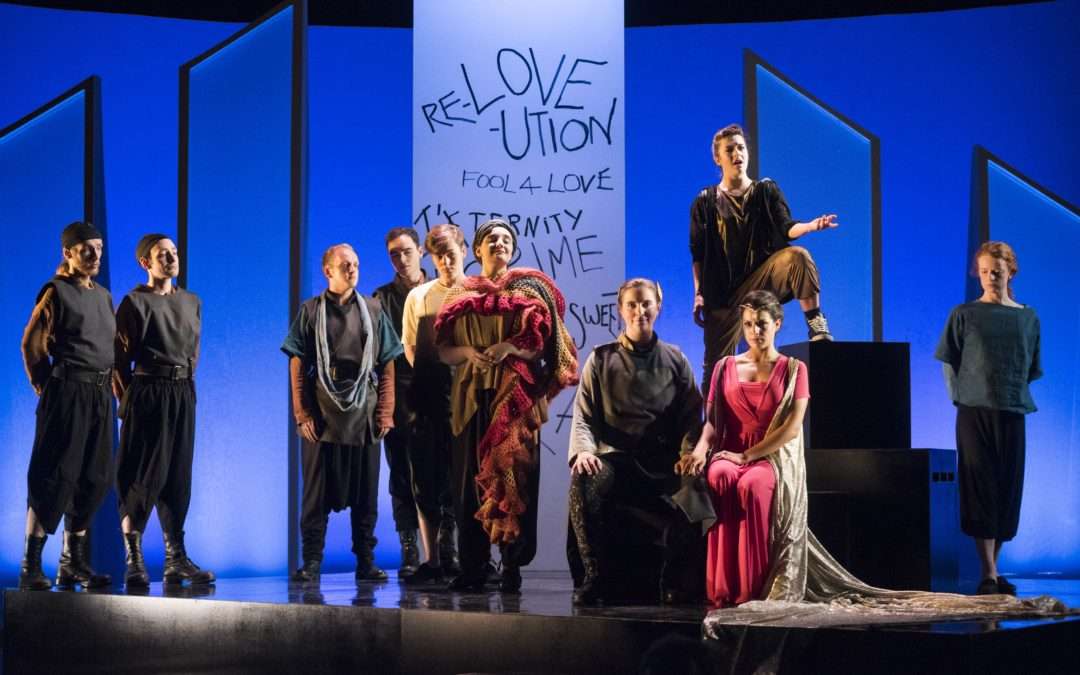 As flies to wanton boys are we to the gods: but in Longborough Festival Opera’s production of Monteverdi’s L’Incoronazione di Poppea, it’s the girls you have to watch. Love, Fortune and Virtue – the mismatched trio of allegorical figures who provide the sole moral backstop in Monteverdi and Busenello’s pre-Christian universe – are presented in Jenny Miller’s production as a boisterous girl-gang, all leather leggings and crop-tops. Amor (Chiara Vinci) even has a little rucksack with a flaming heart embroidered on it. What becomes fascinatingly clear, as the action unfolds, is how little of a match they prove for unconstrained human ambition, even in its most beguilingly seductive form. 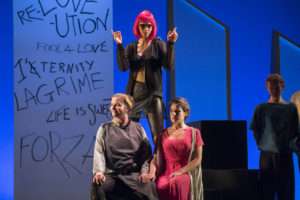 These season-ending baroque productions have become a bit of an end-of-term treat at the Cotswold Bayreuth. Designed as a showcase for young and early-career performers, and with a specially-assembled period instrument orchestra, they draw on exactly the qualities that make Longborough’s celebrated Wagner productions so exceptional – a focus on musical and dramatic values, shrewd casting, and a knack for creating big effects with limited resources. Nate Gibson’s abstract set designs comprise a labyrinth of shard-like, sculptural forms, artfully lit by Matt Cater, which re-arranged themselves in Act Two into a regimented formal backdrop for Nerone’s tightening grip on power.

Miller’s direction discreetly reinforces the shifting power dynamic. Amor, Nerone (Anna Harvey) and Poppea (Sofia Troncoso) dominated the centre of the stage; other characters were pushed to the edges, sometimes even onto conductor Jeremy Silver’s harpsichord. Seneca (Matthew Buswell – dressed, alone amidst the generally period-neutral costumes of the rest of the cast, as a sort of Buddhist monk) was actually forced down into the orchestra pit itself, his suicide hidden amidst the rising steam of his fatal bath. Amidst a youthful but wholly committed company – vocal strength in depth is another Longborough trademark – his singing had a ringing authority. Just as Isabella Cheevers’s Virtu had been portrayed as the glasses-wearing speccy-no-mates amidst her divine pals, so Buswell’s clipped, brusque phrasing deftly suggested a personality which, incapable of bending to Nerone’s realpolitik, could only break.

And Anna Harvey’s Nerone was all the more vicious for being so outwardly charming: singing with a pure, mellow tone and a sunny demeanour that only occasionally hardened into a snarl or a maniacal smile. More often, she’d simply let a high-lying phrase open out and blaze with a radiance that made surrounding characters wither: absolute power seduces absolutely. As Poppea, Troncoso (below) was compellingly sensual – letting her smoky, perfumed phrases curl around Nerone, with a soprano that was simultaneously coolly controlled, and tremulous with barely-suppressed lust. From their first scene – embracing centre-stage – the chemistry was real. 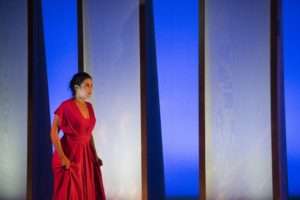 So there was never any doubt that the attraction between this pair would prove unstoppable – it was simply a question of how and when it achieved its goal. Rosie Lomas’s bright-toned, irrepressible Valetto caught the general mood of sensual licence, and caught it bad. Maria Ostroukhova’s grandly dignified Ottavia couldn’t do much about it either, and Drusilla (Lucy Knight) and Ottone (Matthew Paine) sang with such sweetness and sincerity (the edge of Paine’s voice nicely caught his character’s desperation) that their regicidal scheming came across like two rabbits trying to defeat an eagle.

If the choral singing was more characterful than blended, and the cornetts of Silver’s lively, lyrical orchestra (the continuo was colourfully blended) occasionally sounded like they’d been taken by surprise, it’s worth saying that Act One was interrupted and then halted altogether by a thunderstorm that chose precisely that moment to burst over the Evenlode valley, knocking out the theatre’s electrics. The gods clearly had their own views on such superbly rendered sin; and although Longborough’s team got the show up again (after bringing forward the dinner interval) with smiling professionalism, the evening can’t really have flowed as anyone intended.

But the strength of the concept and the performances was clear enough, and the final tableau – with Nerone and Poppea mounting a pyramid formed from the discarded bodies of their opponents, voices slipping and melting into each other as they sang that blissful, terrible final duet – was horribly compelling. The slogan “Words do not mean anything now” appeared, scrawled in neon pink on the backdrop, and Amor’s expression froze, then blanched in horror, as she witnessed the true nature of the triumph that she’d prophesied so exuberantly at the start of the evening. Another reason to shiver as we headed out into the unexpectedly cold air of a dripping July night. 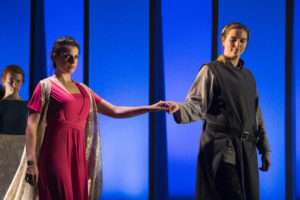