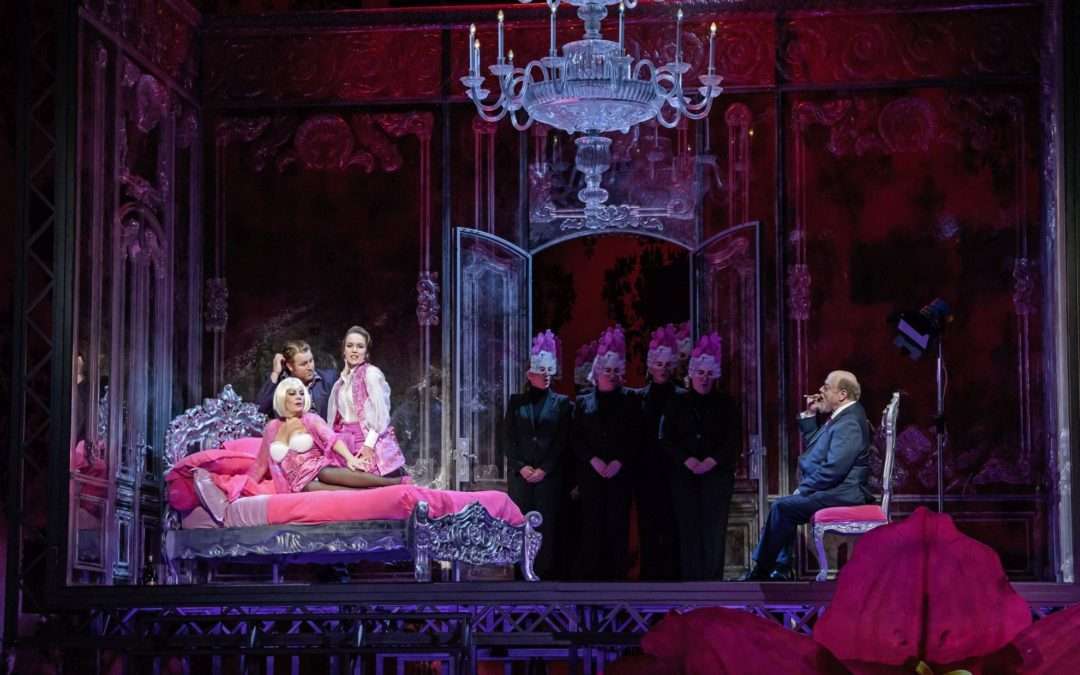 Scarred with the epithet “the ugliest show at Covent Garden in living memory”, Jonathan Kent’s 2014 production was never going to make an easy revival. Deprived of Jonas Kaufmann and Kristine Opolais as Des Grieux and Manon, would it even sell? In fact, the new cast (Aleksandrs Antonenko and Sondra Radvanovsky) proved respectable, and Antonio Pappano as engaging as ever in the pit, but an air of endurance rather than enjoyment hung over the first night.

Kent’s updating of Abbé Prévost’s 18th-century tale of ill-fated Manon to trashy 21st-century America is intermittently illuminating. Designer Paul Brown’s Vegas-style resort hotel at the opening offers balconies and summer colour and a split-screen into the gaming room, while a soft-porn studio has Geronte commodifying his own titillation, vlogging for his voyeuristic mates. This feels like a natural development of the Prévost: however lushly romantic Puccini’s score, the core of Manon Lescaut is cold, cruel exploitation.

Where it goes awry is in Act IV, when Manon has become a sex-worker and joins a walk of shame with her comrades in a knock-out TV reality-show. Quite what she is accused of and by whom, and why she is pushed through an advertising hoarding (hawking the perfume Naiveté) onto a flyover remains unclear. These garish side-shows dwarf the tragic romance at the opera’s heart: what should be a scene of tender intimacy between the lovers under a desert sky is overwhelmed by stage rigs, hulking sets and Mark Henderson’s caustic, unflattering lighting.

This is particularly unfortunate, since Manon’s aria ‘Sola, perduta, abbandonata’ is where Sondra Radvanovsky hits her vocal stride. Though reliably projected and well shaped, her delivery is unvarying; but when “the burning tears are falling” she finds sustained incandescence in a poetic final scene. If only we were more emotionally engaged in her relationship with Des Grieux, always an issue in Puccini’s telescoped version of the story.

Aleksandrs Antonenko, burly, besuited and stiff, has little of the romantic student about him (unlike Luis Gomes’s thoroughly believable Edmondo, exuding sunny ease). He has the vocal heft for Des Grieux, but lacks flexibility and intensity. It’s not surprising the darkly virile ‘Ah! Manon, mi tradisce il tuo folle pensiero!’ in Act II brought out his strongest performance: the aria reeks of Tchaikovsky. With chemistry between the lovers running cold, however, some physical direction might have come to the rescue; but every interaction between the lovers felt awkward in the extreme: is a simple embrace no longer permitted on the opera stage?

Some cast members were an improvement: mercurial baritone Levente Molnár brilliantly captured the complex Lescaut (previously given a spivvy turn by Christopher Maltman) – part-pimp, part loyal friend and brother – without resorting to pantomime villain, while Eric Halfvarson was an ideal Geronte, the smooth authority of his bass casting its reassuring yet troubling spell. Inspired, too, was the scene in which Emily Edmonds’ sweetly seductive Musician comes on to Manon for the delectation of Geronte.

From the opening bars, Pappano brewed up an intoxicating drama, honouring a score “written with desperate passion”. His overture fairly crackled into life, combining testosterone-fuelled swagger with a seductively slinky rubato, and raising the temperature for the lovers’ first encounter. Act III’s intermezzo loped along with feline tread, featuring string solos of such voluptuous sweetness the flame of love burned brighter in the pit than it ever did on stage.