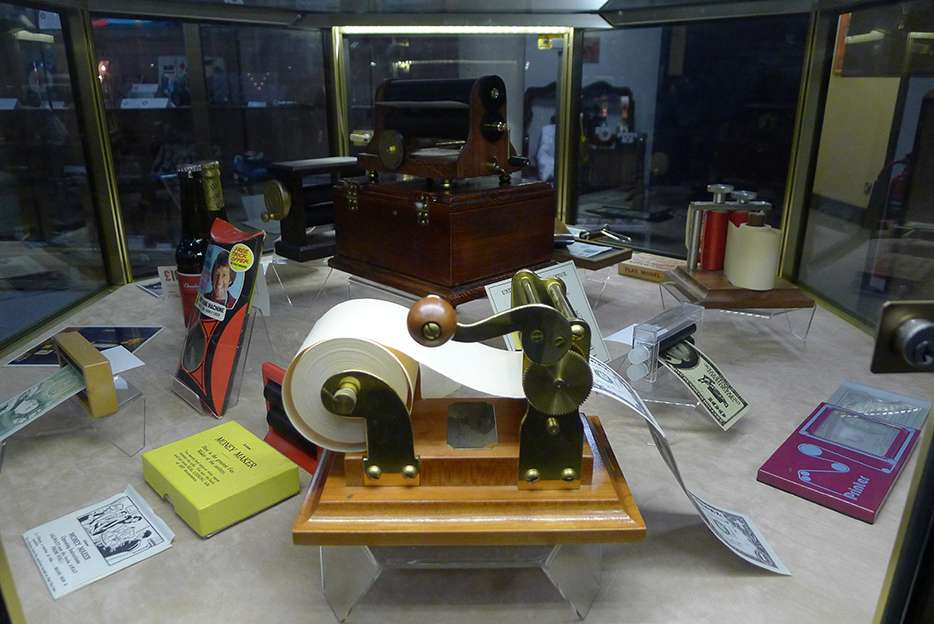 A Display of Magical Money Making Apparatus, (Courtesy of The Magic Circle Museum)

How do you conserve an entire profession’s history?

Looking at the tools, say, a carpenter might leave behind him fails to convey certain achievements even if the work resulted in glorious marquetry or the conservation of a piece by André Charles Boulle. Yet this is the raison d’être undertaken in a building close to Euston Station that preserves the history, the lives, the skills and the craft of a very secretive profession, magicians. This is the headquarters of conjurers worldwide, the Centre for the Magic Arts, The Magic Circle. Magic it certainly is!

A small museum shows parts of the collection but exhibits are also displayed over the entire building. Other aspects of the profession are not overlooked; there is a library (with 12,5000 books on magic), a fully equipped theatre where performances are a regular feature, a clubroom where you rub shoulders with magicians discussing the minutiae of magic, there is an archive (containing some of Houdini’s letters and some from Sir Arthur Conan Doyle) and there is an inner sanctum for the secrets! 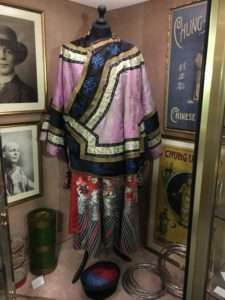 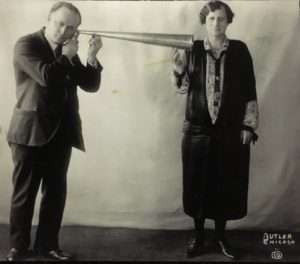 The museum may be tiny but it is a cornucopia of wonders housing artifacts and publicity material connected to the magic arts from c.1800 to the present day. I was told in the centuries prior to 1800 magicians tended to work with more everyday items, eggs, handkerchiefs, etc. and preserving a 17th century egg might not be rewarding.

Changing, themed displays are mounted and I arrived at a moment of slight crisis to find their curator, Jonathan Allen, re- installing a showcase that had fallen victim to a burst pipe in the recent bad weather. Ironically the now vanished display had been devoted to Spiritualism. Largely dry now, a dehumidifier still whirled, Allen told me that things were “ok-ish”, – the spirit hand[1] and collapsible spirit trumpet[2] were unharmed, and the photos were digital copies, not originals. The originals were safe in the archive! But there were two books that might not make it. They could be conserved but they were not signed copies and could probably be replaced for about £200. For small museums pragmatism is ever present and The Magic Circle, a private members organisation, like many small public museums relies heavily on its volunteers.

Money gets a look in in other guises. The aspects of the collection are part of the British Museum’s money and medals network, http://www.moneyandmedals.org.uk/col-magic-circle-museum/4591713224,  that supports access to numismatic collections all over Britain. The Magic Circle’s collection includes medals relating to the membership of magical societies from c.1900 onwards, commemorative tokens and banknotes and, of course, money-themed performance theatrical props like money vanishing devices and Magic Money Machines[3]. 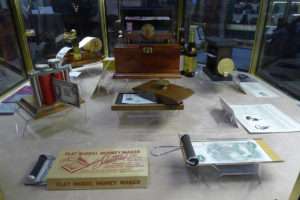 A Display of Magic Money Making Machinery, (Courtesy of The Magic Circle Museum)

The Circle’s president, Scott Penrose, explained how far attitudes to conservation and preservation of the collection have changed in the last five years. There has been much rearranging of objects within the building. Oil paintings and other vulnerable pieces have been removed from above radiators and replaced with more sacrificial ones or reproductions of posters. Conservation acid free card was in evidence as are archival sleeves. But light had been a big issue. With advice from the V&A, windows have been re-glazed with sand blasted glass to give diffuse light, fluorescent tubes have had UV sleeves fitted and LED lighting installed, all radically reducing light levels. This LED lighting overhaul was made possible because of a gigantic bequest largely comprising of magic books and vintage magic posters.  The agreement with the donor was that it would be used to better the collection. So it was always envisaged that duplicates would be sold and the monies reinvested in the preservation of the collection. What conservators may think of as basic measures for small museums often involves great generosity and hard work and choices to raise the necessary funds. 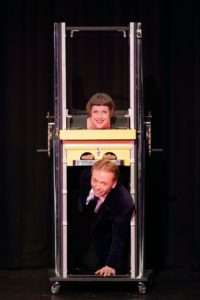 Many exhibits relate to individual performers and historical events within the conjuring world and despite the sacrifices installing new lighting involved the measures certainly helped the display commemorating Chung Ling Soo, the Marvellous Chinese Conjurer. Due to the previous high light levels Soo’s colourful silk costume is now, sadly, less colourful. Soo, a New Yorker called William Ellsworth Robinson, came to England in 1900 and, dressed as a Chinaman, he performed a range of tricks; linking steel rings together, producing live goldfish from the air and being shot at and catching the bullet in his teeth. However, one night it went rather wrong and Soo died as a result. The museum also has Soo’s gun. Soo was not the only magician to make this error: apparently there were at least twelve who have done so and Houdini was advised against performing the trick following Soo’s death. He appears to have taken the advice, although it did not save him from getting a bullet in his palm while villains tried to coerce him into cracking a safe for them. There is a photo of an x-ray of Houdini’s hand, including the bullet.

Soo’s terminal misadventure occurred on 23rd March 1918 on stage at the Wood Green Empire, a Frank Macham theatre, and Penrose told me he thought a plaque on the exterior of the Empire to commemorate the event’s pending centenary would be good. Today there is only the façade, the interior is a supermarket. ‘But I found myself in difficulties’, Penrose said. ‘The local council viewed the idea of a commemorate plaque to a white man who dressed as a Chinaman (think of attitudes to blackface today), who shot himself in front of an audience differently. That plaque was not going to happen.’ 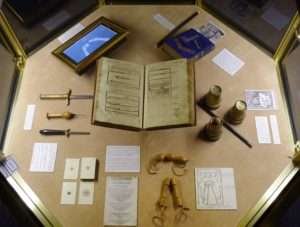 View of a a Display Case showing Early Writings and Related Props, (Courtesy of The Magic Circle Museum)

Among the museum’s other treasures are copies of the oldest book on magic: The Discoverie of Witchcraft, self-published during the reign of Elizabeth I in 1584 by a Kent JP called Reginald Scot. Written in a period when witches were burnt at the stake for having supernatural powers, the historian Edwin A. Dawes says: ‘Scot conceived the idea that it would be a telling argument for his case if he could demonstrate that feats of sleight-of-hand were produced by purely natural means and not be diabolical intervention’. The book also reveals that many tricks are centuries old; the Cup and Balls, the Cut and Restored Rope and the Vanishing Coin among them, all performed today. So magic is as much about the performance as sleight-of-hand. 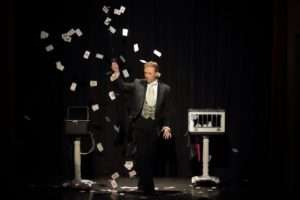 The Circle commemorates early twentieth century performances by painstakingly digitizing Kinora reels, extended flick books similar to the technology behind ‘What the Butler Saw’. One shows the Magic Circle’s first president, David Devant, producing an egg from his mouth. 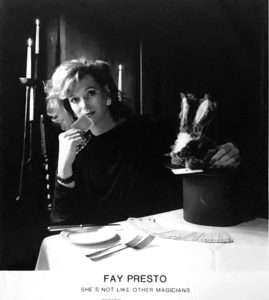 A rare image of Harvey the Rabbit with his amanuensis, Fay Presto

Live performance too is very much alive in the small theatre. I was there on International Women’s Day and saw five female acts, but it was a male that stole the show. Earlier I had made the error of observing the museum was a surprisingly devoid of rabbits, although Sooty is there with his miniature box for sawing the lady in half. This was before I met Harvey – The Glorious Harvey – who arrived on stage in a small jeep to the strains of Raiders of the Lost Ark, stealing the show from his amanuensis, Fay Presto. He insisted on donning a pink sequined tail coat to perform card tricks badly but with perfect paws – sorry, poise! However, in the tradition of the Magic Circle, keepers of magicians’ secrets, Harvey is camera shy and shuns publicity. You will just have to go and see him perform!

If you are unable to grab a magician to take you to a Monday evening Club Night, members of the public can go to events details of which are on the website – https://themagiccircle.co.uk/public-events. Your ticket to the performance also allows you to visit the museum. 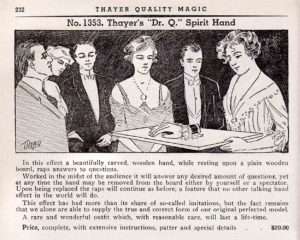 Advertisement for the Thayer ‘Dr Q’ Rapping Hand – another essential for your Seance, {Courtesy of The Magic Circle Museum)

[1] A Spirit hand is a device for use in séances that would knock out answers to questions posed by an audience.

[2] A Spirit trumpet or ‘trumpet séance’ was used during séances. Once the lights were darkened the trumpet, apparently, rose from the table, floated around ‘spirit voices’ and might even have exuded ectoplasm. It could also be used to hear less distinct spirit voices.

[3] The introductory label for the display of these machines includes the following statement: “In a culture of increasing litigation and regulation, as well as widespread misdemeanor within the financial industry itself, one magic money machine manufacturer in the USA now ironically warns purchasers: ‘Please note – the Acme Money Machine is a magic trick and for entertainment purposes only. It is not a counterfeiting machine. Please do not purchase it expecting it to solve your financial issues.’”

This article first appeared in the August 2018 Issue if ICON News, The Magazine of the Institute of Conservation.