Woman with Her Throat Cut – Alberto Giacometti, 1932 By Sue Hubbard 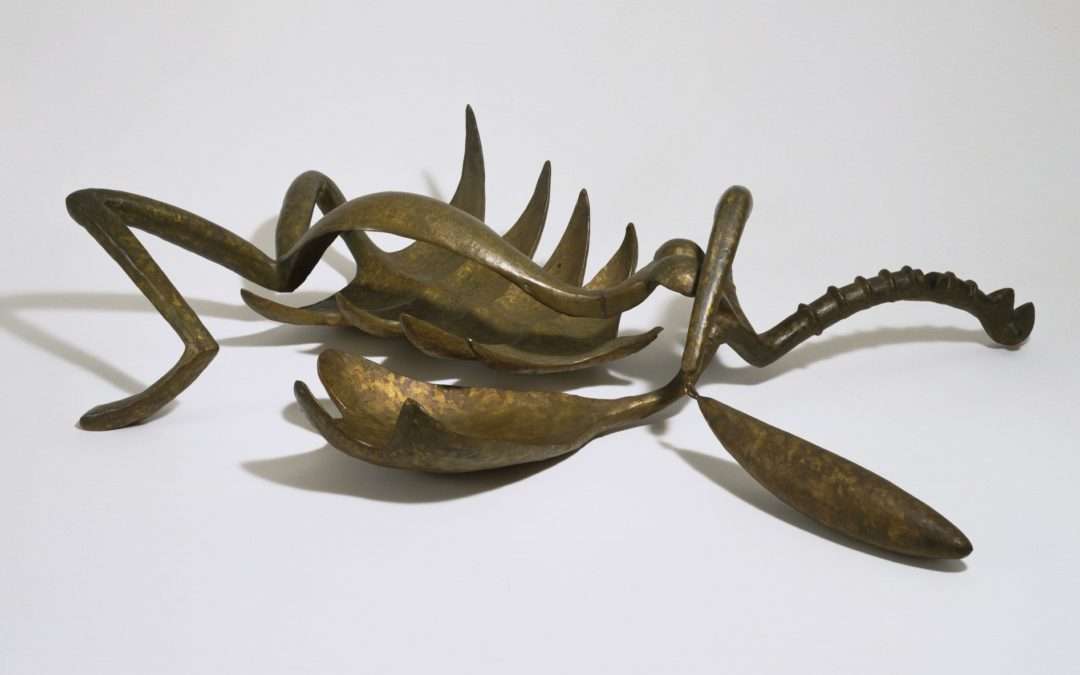 ‘A fetish is a story masquerading as an object’ – Robert Stoller

This morning I heard on the radio that the body of Sarah Everard, a young woman missing for a week, has been found in undergrowth and that a member of the Metropolitan police has been arrested. We may never know the disturbing back story to this murder but, yet again, a woman’s life has been cut short by a man. A man full of anger and hate.  Yet again women will feel unsafe walking home from a night out with friends, just as they so often feel unsafe in the workplace among those who use their sexuality as a form of control or, too often, particularly during lockdown, in their own homes with an abusive partner. Despite the MeToo movement nothing has really changed. It’s 50 years since the campaign to Reclaim the Night, yet women remain in danger.

In 1932 Alberto Giacometti made an enigmatic and perplexing sculpture, Woman with Her Throat Cut. At the time he was living in Paris, a part of the Surrealist group. The shocking image reflects Surrealism’s fixation with the irrational, with sexual duality and archetypes. Juxtaposition and aggression were a part of the Surrealist language used to mine the new(ish) interest in the hinterlands of the psyche and the chthonic depths of the unconscious. As de Sade wrote: “there is no better way to know death than to link it with some licentious image”.

Led by André Breton and Max Ernst, the largely male group were well versed in the writings of Freud. Art allowed them to give voice to long submerged desires, to explore the connection between death and sexual excitement. At the beginning of the 20th century the ‘primitive’ held a fascination for intellectuals and artists expressed as an interest in African art and in the ‘dark’ urges uncovered by psychoanalysis. These instinctual drives were perceived to stand in contrast to the mundane behaviour displayed by the bourgeois world; to be the cross-roads between ‘civilization’ and the ‘savage’.  Freud’s map of the psyche placed the ego (the Ich, the I) at a point between the civilizing super-ego and the primitive libidinous id. Surrealism provided a visual language with which to break through the niceties of daily existence to explore feelings that were more  ‘authentic’ than those encountered in polite society.

“The domain of eroticism”, wrote Bataille, “is the domain of violence, of violation… the most violent thing of all for us is death which jerks us out of a tenacious obsession with the lastingness of the discontinuous being.” Death reminds us that we are alive. For Bataille, it was a state of dissolution that mirrored the transition from what was ‘normal’ to what was erotic. In these encounters the female was the essentially passive partner transformed into a deviant sexual object of male desire.. “The whole business of eroticism is to destroy the self-contained character of the participators as they are in normal life,” wrote Bataille. Such detached thinking allowed men to act out their inner fantasies and explore repressed taboos.

Woman with Her Throat cut is an emotionally highly charged work. The first of six bronze casts acquired by Peggy Guggenheim from the artist in 1940. Approximately three feet long and nine inches high it loosely depicts a woman lying on her back. Her throat appears to have been slashed and there are signs of rape, even of attempted murder. Yet she still seems to be alive, moving and sexually available. A spidery arm reaches out. Her legs are spread open. Her long neck arches backwards in what could either be agony or ecstasy. A reminder that the French phrase for orgasm is ‘le petit mort’. Full of ambiguity and contradiction the work is violent and cruel, yet playful and ironic. The jagged neck suggests not only the marks of a razor blade but the frets of a violin. This woman is a musical instrument on which the male can play his misogynistic tunes. It may be a coincidence, but in 1932 the aristocratic Donna Madina Gonzaga visited Giacometti in his studio prompting feelings of embarrassment and shame at his humble surroundings. Afterwards he became obsessed with her long, elegant neck.

Part animal trap, part vagina dentata, Woman with Her Throat Cut conjures a strange nightmarish mutation reminiscent of Gregor Samsa’s beetle in Kafka’s Metamorphosis. Or a praying mantis – the female of the species consumes the male after sexual congress – favoured, Michael Berison suggests, by the Surrealists to illustrate the dangers of female sexuality.  Stretched and elongated the figure appears to be in her death throes, breathing her last, dying alone.

Like Picasso, Giacometti came from a society that held very conservative views about women. Born in the mountain hamlet of Borgonovo in Eastern Switzerland in 1901, he enrolled in 1915 at the Evangelical School in the town of Schiers. It would be surprising, therefore, that this early upbringing, which presented women in stark contrast to those he’d meet later in the sophisticated artistic circles of Paris, didn’t have some effect on his conditioning and create numerous contradictions about his attitudes to women.

Yet  beyond the imagery of gender politics, the jagged points evoke the barbed wire of the First World War trenches and are a painful reminder of a conflict that devastated the psyche of a generation, and of the young men slaughtered in their thousands on the battlefields of northern France. Perhaps it’s not too great a leap to consider that the hard metal surface depicts something of the feel and smell of heavy artillery, for the mechanisation of warfare made the 1914-18 conflict the most destructive the world had seen to date.

Along with other of Giacometti’s uncanny sculptures such as Suspended Ball (1930-31) a phallic form trapped in a metal cage; Woman with Her Throat Cut belongs to a period of distinctly Surreal work. Yet just as Giacometti was finding fame as a Surrealist he turned his back on that thread of Modernism to return to the tradition of the human figure. As a result he was excommunicated from the movement by André Breton. Knowing and clever, surrealistic sculpture was dependent on the juxtapositions and absurdities thrown up by dreams but Giacometti felt the need to abandon this theatricality to investigate the alienated feelings of the human subject experienced in the depression of the post-war years. Along with Beckett, Giacometti was to become one of the great exponents of existentialism, exploring notions of social isolation and anxiety, creating figures that Sartre described as “always mediating between nothingness and being.”

Asked by Genet why he approached male and females differently, Giacometti admitted that it was because he didn’t understand women, that they seemed more remote. As an adolescent he’d suffered badly from mumps, which had left him infertile as well as, partly, impotent. A state most easily cured by detached sex with prostitutes.  Looking at Women with Her Throat Cut a century after it’s making – particularly in the light of the tragic murder of Sarah Everard – it still has the power to shock. Men of Giacometti’s generation were brought up to believe that women were either Madonna’s or whores. But the real outrage is the realisation that little has changed. ‘Give us a smile’, ‘you know you want to’, ‘don’t you have a sense of humour?’ men still quip as if by divine right, while women continue to be perceived as sexual objects. Objects of male fantasy, desire and hate that, even now, can be the catalysts to unspeakable murder.

Sue Hubbard is an award-winning poet, novelist and freelance art critic. Her latest novel Rainsongs is published by Duckworth and her fourth poetry collection is due from Salmon Press. www.suehubbard.com