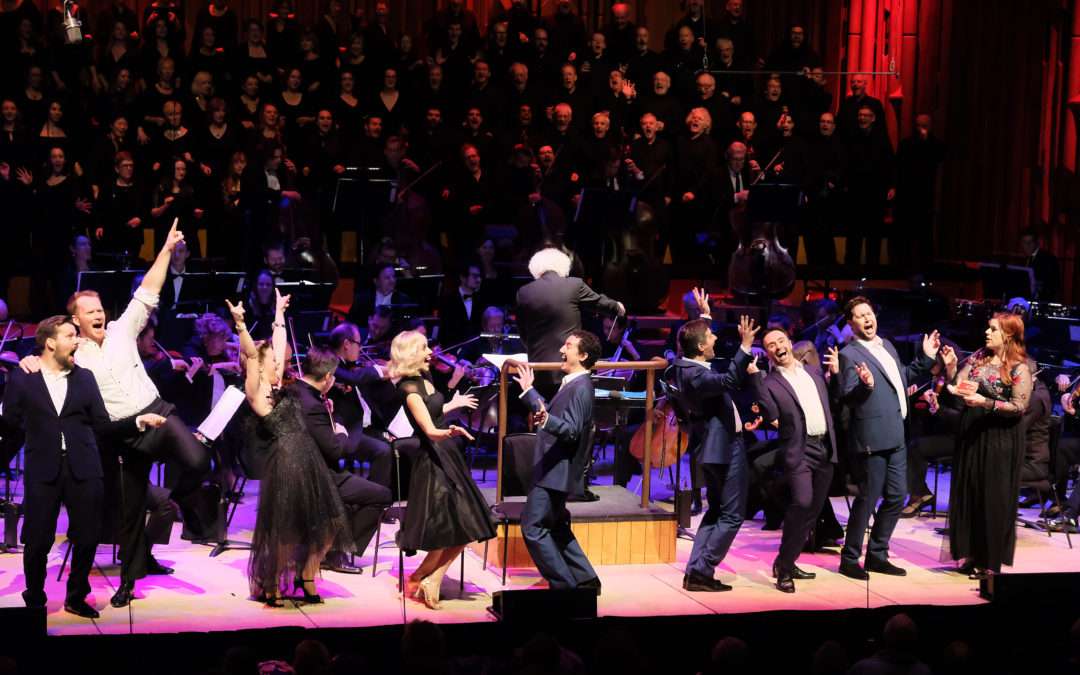 Rattle introduced the work, premiered in 1953 and performed here semi-staged, thus: “It is a love letter to New York, with just about every racial and musical stereotype thrown at it,” and told the story of how Bernstein was commissioned at ridiculously short notice to enable Rosalind Russell to reprise the central role of Ruth Sherwood that she had in the successful 1942 film My Sister Eileen in a new musical version of the story.

Rattle has his own history with this piece. He recorded it with the Birmingham Contemporary Music Group and it had many joyous outings during his time in Berlin, including at least one Silvesterfeier (New Year’s Eve), a big thing in the German capital. The good news is that the two London performances of Wonderful Town this last week have been recorded for a future release on the orchestra’s LSO Live label.

The role of Ruth, often taken very effectively in Rattle productions past by Kim Criswell, was sung here by the superb Alysha Umphress. There are words a-plenty in the part of Ruth, and she made every one of them count. Her ‘One hundred ways to lose your man’ was hilarious, and her total understanding of the role singled her out as the star of the evening. Duncan Rock as Wreck gave a perfectly aimed ‘Pass the football’, Danielle de Niese was delightful as she soaked up the attention of the harmonising Irish police in ‘My darlin’ Eileen’, and the beautiful resonant tone of the urbane Nathan Gunn as Bob was another stand-out.

Chorus director Simon Halsey is equally at home with this piece, having worked frequently with Rattle in Berlin: the chorus sang from memory, and had a great night. Their soft, wordless accompaniment for Nathan Gunn in ‘A quiet girl’ was glorious.

Bernstein’s score has great tunes and fizzes along. There is an orchestral section entitled Conquering New York where the theme which was later stretched out (maybe too far) in Prelude, Fugue and Riffs has an outing. And the jazz musicians in the ensemble shone here: Jay Craig on a commanding bass saxophone, Bruno Heinen light and agile, and Matt Skelton impeccable on drums. Bernstein once said: “Jazz fools around with notes, it has fun with them.” Too right.

A love of detail was everywhere; the LSO is matchless as a studio orchestra, and when the recording comes out I know I will enjoy the cellos just holding a poised, delicate, quiet note under one section of ‘Pass the football’, I shall remember a staged bathed in green light for “My darlin’ Eileen”, and I’ll listen out for Andrew Marriner’s clarinet pyrotechnics in ‘Ballet’.

The final conga was the purest expression of wanting to just celebrate and have fun. There was a delightful moment caught on a Facebook video (at 0:16) when Danielle de Niese hoisted the LSO’s MD Kathryn McDowell out of her chair and onto her feet for a conga round the Barbican. For having lured Rattle – and bringing him and the good times back – McDowell deserved that victory lap.